Just like the German Bundesliga and Italian Serie A, the French Ligue 1 has been dominated by one team. That has been the case for several years now. Leonardo Jardim’s Monaco merely interrupted Paris Saint-Germain’s dominance in 2017. But the capital city club promptly rose to the fore the next season. Back-to-back league titles have followed.

Although European silverware has become a top priority for the club, domestic success is still considered important. At the moment, the reigning champions look unstoppable as manager Thomas Tuchel looks to continue what is fast becoming a tradition in the division. That is to be expected given the gulf in class between the club and its competitors as a result of investment in top quality players.

However, the fact that Rennes shocked the perennial champions to lift the Coupe de France last term shows that anything can still happen. In football, as in life, nothing stays the same. And so the reigning champions cannot go to sleep thinking they can just stroll to the title. Yet, it will be a difficult task dethroning them.

For a side that has been at loggerheads with one of its best players (if not the best), Neymar, the cracks are emerging. Whether this opens the door for a competitor to stake a claim for the title is yet to be seen.

But going by spendings in the current transfer window, that is unlikely. As has become customary, the champions have reinforced to make the team even stronger. While the likes of Lille and Lyon have lost key players that made them competitive last term, Paris Saint-Germain has made some important signings. Players like Ander Hererra and Idrissa Gueye joined from the Premier League while Abdou Diallo made the move from Borussia Dortmund to the French capital in a £29million deal.

Goal Nigeria
GoalcomNigeria
Follow
The Premier League is back! 😃

And there's some shopping to be done 🛍

As expected, some teams could not keep up with the competition and fell by the wayside. Caen and Guingamp finished at the bottom of the table and got relegated. Promoted to take their place are Metz and Stade Brest. Les Grenats have bounced back to the top flight having been relegated two seasons ago. As for Brest, The Pirate Team is making a return after a six-year absence.

Both clubs have largely kept faith with the group of players that helped secure promotion. Only a few additions have been made to the teams. The latter added Romain Perraud from Nice and Ibrahima Diallo from Monaco for £1.8 million each. It remains to be seen if that will be good enough to survive the rigours of the top division.

New Players/Managers to Look out for

As earlier stated, Paris Saint-Germain remains the team with the most high profile signings. Gueye has been solid in midfield for Everton as has Herrera for Manchester United, although hindered by injuries from time-to-time. The duo is expected to add some spine to the side's midfield while forward Pablo Sarabia will add firepower up front.

Runners up last term, Lille lost their key man Nicolas Pepe to Arsenal. But Les Dogues have acquired attacking midfielder Yusuf Yazici from Turkish side Trabzonspor for £14million, and Nigerian forward Victor Osimhen amongst others to replenish the team. Both Lyon and Marseille changed managers. Andre Villas-Boas joined Les Phoceens while Brazilian Sylvinho took over from Bruno Genesio at Lyon. The Frenchman left for Chinese side Beijing Guoan.

Despite losing some quality players like captain Nabil Fekir to Real Betis and Tanguy Ndombele to Tottenham, Lyon strengthened. Defensive midfielder Thiago Mendes was brought in from Lille as a replacement for Ndombele. The club also signed 23-year-old centre-back Joachim Andersen from Sampdoria. But it is the champions that still hold the ace.

Can Any Team Upstage Paris Saint-Germain?

Last season's top scorer, Kylian Mbappe, is raring to go having had a good pre-season including netting in the Trophee des Champions. The acquisition of striker Pablo Sarabia from Sevilla is meant to lessen the burden on him especially with Neymar set to leave.

At the moment, no team looks capable of wrestling the league title from the holders. But then, football can be unpredictable. We'll have to wait and see how it all unfolds... 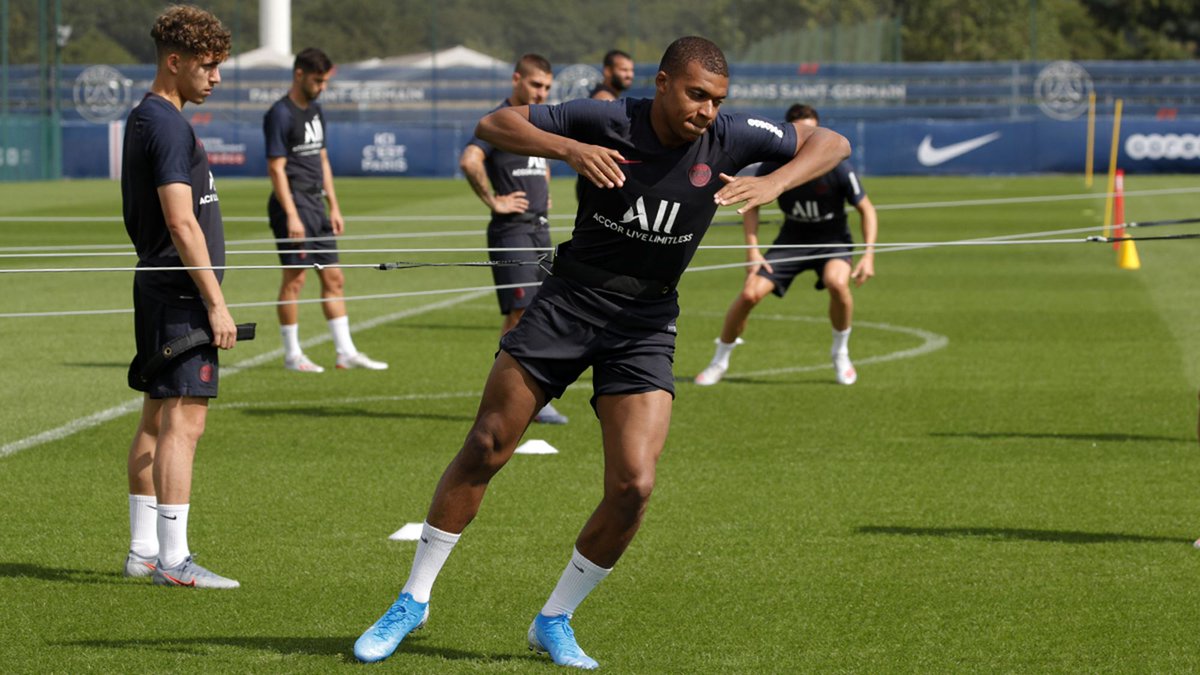 The boys were back in action today, getting ready for Sunday's first game of the season 🆚 @nimesolympique!