There’s a reason the Premier League is widely regarded as the most competitive in the world. The depth of competition thanks to its nearly equal distribution of television revenue makes for very few minnows and more upsets than most competitions provide. Pep Guardiola’s Manchester City might have established a monopoly with their untouchable squad. However, the best stories aren’t always those scripted in the title-race. Wolverhampton Wanderers, for example, produced their own fairytale after returning from a long exile.

Nuno Espirito Santo made the Molineux an unbreachable fortress again and took the fight to the top dogs. By securing a Europa League berth, they not only made themselves but the entire Championship in the bargain. England’s second division isn’t a pond stocked with minnows anymore. Barracudas swim its waters. English football's financial gains give smaller clubs serious firepower.

Not all Championship sides are managed as cleverly as Wolves. Cardiff City and Fulham proved that last season. Overall, however, quality has clearly improved. Promotion's financial perks [Aston Villa made nearly £170 million by winning the play-offs final] are icing on the cake.

Even so, rising through the ranks isn’t cheap. Championship clubs combined for an operating loss of £510 million in the 2017/18 season. It's all or less than nothing. Is the risk worth the reward? Enough of the 24 teams in the second flight each season think so but some do lose their nerve once they reach nirvana. Last season, Fulham spent through the nose. Wolves merely tweaked a lineup that had been assembled a year earlier with the Premier League in mind. Cardiff, though, did next to nothing. This season, the Premier League promotion version of Goldilocks and the Three Bears played out again. 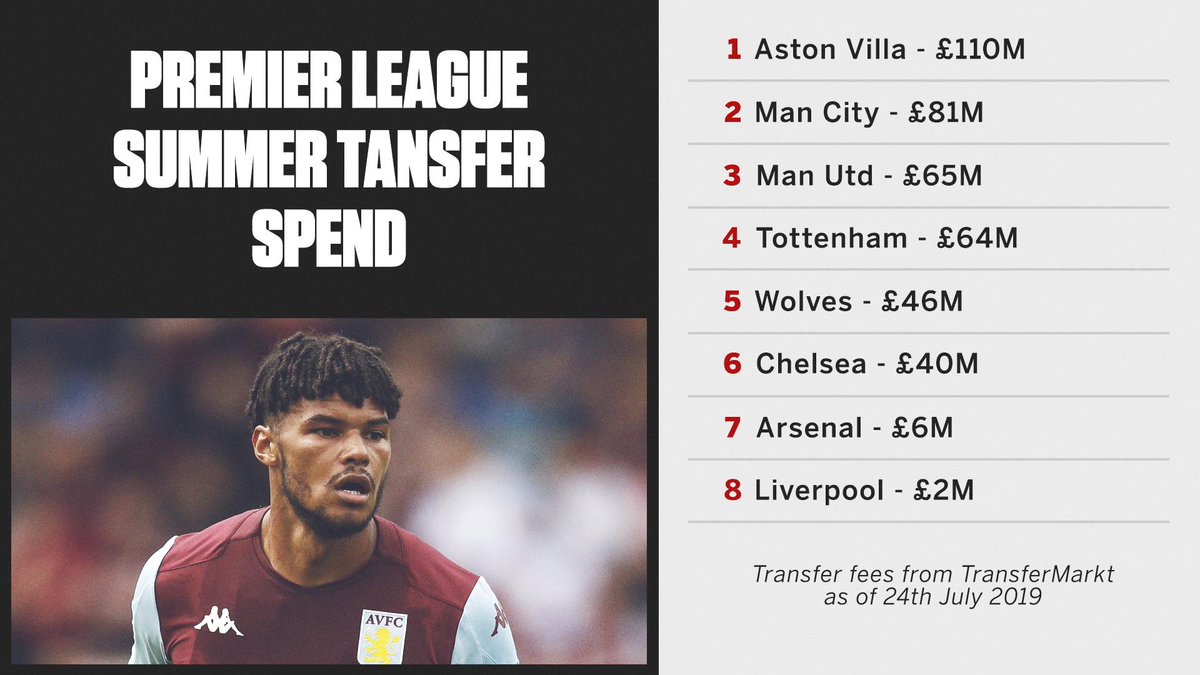 Is this spending too much?

Aston Villa didn't hold back in bulking up their squad. Dean Smith's Claret and Blue invested over £100 million preparing for their first season back in the top-flight. The Villans haven't quite matched Fulham's 10 signings from 2018/19 but there is still time.

The Cottagers didn't spend their money wisely but, for a club on the crisp of bankruptcy last year, Villa are surprisingly free with their cash. Smith made some astute choices that should serve his side better than Slavisa Jokanovic's did Fulham.

Jack Grealish will test his Eden-Hazard-like skills against top competition. Like Jokanovic, Smith isn’t forming a team to grind points. He'll play some fearless, beautiful football to thrill the league. The question is whether it will have more grit than Fulham?

Is this spending too little?

Daniel Farke’s Norwich City run silent in the transfer market. With a few loan deals and cheap transfers, they Championship champions haven’t even spent £5 million yet.

Experienced goalkeeper Ralf Fahrmann could win them some points, while Josep Drmic will be an asset from the bench. Goal-machine Teemu Pukki extended his stay along with youngsters Max Aarons, Emiliano Buendia and Ben Godfrey.

Farke showcases admirable faith in retaining his Championship-winning core. Again, the question is where that got Neil Warnock this past term?

Is this spending just right?

Sheffield United’s much-anticipated return to the top-flight is also being planned as a long-term project by Chris Wilder. The Blades didn't invest as heavily as Wolves in their push to reach the top flight but they seem in no hurry to make up ground.

The 51-year-old reiterated belief in his unique system. The recognisable 3-5-2 bends and twists, sometimes even becoming a 1-4-3-2 with his surreal tactics. Wilder’s centre-halves overlap the wing-backs at times, often joining midfield to retain possession. While these risky tactics could implode in the top-flight, Wilder’s been calm when it comes to spending his resources. But he has spent.

Bournemouth’s underperforming Lys Mousset gets another chance to prove he can find goals in the top flight. Phil Jagielka returns home to fortify the defence. Callum Robinson and Luke Freeman bring creativity and speed in attack. Ravel Morrison is either a masterstroke or the unstable bomb that could explode in Wilder's face.

Can Wilder's unconventional methods and brazen nerve pay the same dividends as Nuno's did for Wolves? That remains to be seen.