5 Candidates to be next permanent Sevilla Manager

The 2018-19 season has been a testing one for Sevilla. The Rojiblancos went into the campaign filled with optimism. Promising 44-year-old Pablo Machin was the new manager after four impressive seasons at Girona, including a tenth-placed-finish in their debut La Liga campaign last term. Despite a bright start, the pre-season optimism faded away. After a disappointing 4-3 away defeat to Slavia Prague in the second leg of their Europa League Last 16 tie and a 6-5 aggregate defeat, Machin was dismissed.

Joaquin Caparros, briefly caretaker manager last season and current director of football was, once again, given the reigns until the end of the year. Five wins from seven games under Caparros has revived Sevilla’s Champions League hopes. Recently, Monchi, responsible for much of the club’s success over the past fifteen years was rehired back into his old sporting director role. He alongside Caparros, has a big decision to make on the next permanent manager. Here are five viable candidates for the role.

The first option is Argentine Marcelo Gallardo. The 43-year-old former Argentina international has achieved great success at River Plate; the club he became synonymous with as a player. Since taking charge in 2014, Gallardo has enjoyed continental success aplenty, winning one Copa Sudamericana in 2014, two Copa Libertadores titles in 2015 and 2018 and two Recopa Sudamericana titles in 2015 and 2016.

Gallardo is contracted to River until 2021. However, with compatriots Diego Simeone and Mauricio Pochettino impressing, Gallardo could soon be the next talented Argentine to try management in Europe. Sevilla could represent a good project for him, too. There is no language barrier to overcome. Sevilla frequently qualifies for continental competition. Finally, Gallardo’s knowledge of South American football could help secure the signings of some fine young prospects.

One disadvantage of Sevilla for Gallardo is his achievements at Los Millionarios are the result of five years of patient building. Sevilla recently has not been a beacon of stability. Since Unai Emery left in 2016 to manage Paris Saint-Germain, Los Rojiblancos have had four permanent managers and two caretaker spells in charge for Caparros. Gallardo would have to arrive and impress instantly without a bedding-in period as Machin found to his cost.

The only Spaniard on this shortlist, 55-year-old Jose Bordalas is arguably coach of the La Liga season for his work at modest Getafe. After taking over in 2016 after their relegation from La Liga, Bordalas got Geta back at the first attempt and last season finished an impressive 8th place. However, this season Getafe are achieving even more remarkable results. After 35 games, they sit 4th in La Liga, just 3 wins away from securing Champions League football next season.

Despite this, Sevilla represents a significant step-up from Getafe. Furthermore, at 55, Bordalas is running out of time to manage one of La Liga’s larger teams. Therefore, it would be difficult to refuse a potential Sevilla approach. Also, Bordalas is not a one trick pony. He led modest Segunda Division outfit Alcorcon to an impressive 5th place finish in 2012/13 and Alaves to promotion to La Liga as Segunda champions in 2015/16.

However, hiring Bordalas could be a similarity to the situation last summer. After all, Machin had only impressed at modest Girona prior to managing Sevilla and subsequently underperformed when given higher expectations.

With Monchi now back at Sevilla after an unsuccessful spell at Roma, he could bring in a familiar face as new manager. Upon arriving in Rome in 2017, one of Monchi’s first moves was to appoint 49-year-old Eusebio Di Francesco as new Giallorossi gaffer after Luciano Spaletti left for Inter Milan.

As manager of Sassuolo between 2012 and 2017, Di Francesco won promotion to Serie A in 2012/13 and stabilised them a mid-table Serie A side. However, the highlight was a 6th place finish in 2015/16 and Europa League qualification. In 2017/18 at Roma, Di Francesco finished 3rd in Serie A and impressively reached the Champions League semi-finals. The Romans topped a group including Chelsea and Atletico Madrid before eliminating Barcelona in the quarter-finals.

Despite being sacked this season after elimination from the last 16 of the Champions League by Porto, Di Francesco remains highly thought of. Sevilla can offer European football and he could again work with Monchi. However, AC Milan are struggling to qualify for next season’s Champions League. Question marks could surface about the future of current Milan gaffer Gennaro Gattuso. If the Rossoneri job became vacant, this may appeal more for Di Francesco due to Milan’s stature and his inability to speak Spanish. 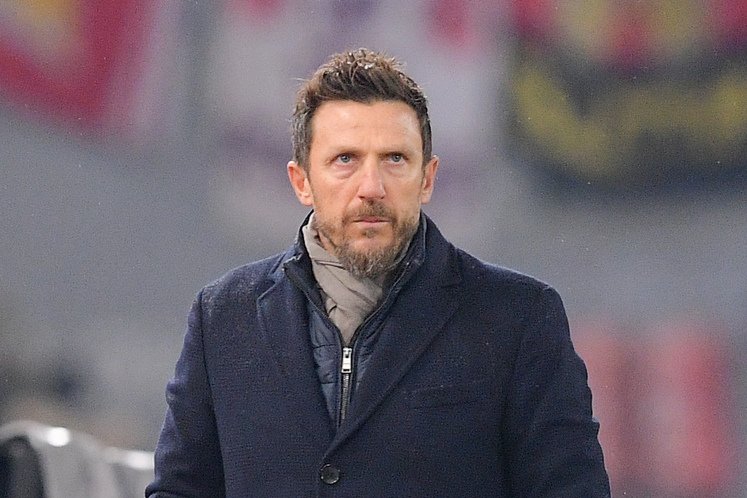 The club would like to thank Eusebio for his work during his time at #ASRoma and wish him success in the future.

The next candidate is 53-year-old Laurent Blanc. He's currently out of work after being sacked as PSG manager in the summer of 2016. Blanc was dismissed after failure to qualify the Parisiens for the Champions League semi-finals. However, he won three consecutive Ligue 1 titles and two consecutive domestic trebles of Ligue 1, Coupe de France and Coupe de la Ligue in 2014/15 and 2015/16.

It could be argued that his two successors in Paris, Unai Emery and Thomas Tuchel have actually done a poorer job. Blanc reached the quarter-finals of the Champions League in each of his three seasons in Paris. Emery and Tuchel have so far failed to get beyond the last 16, choking in spectacular fashion in 2016/17 and 2018/19 against Barcelona and Manchester United respectively. The former even failed in 2016/17 to win the Ligue 1 title.

There are question marks over whether three seasons out of management could see Blanc left behind tactically given the quick evolution of modern day football. However, with the exception of the France national team, he has been a success everywhere else. A spell at Barcelona in his playing days mean there should also be no language barrier.

Our final candidate is PSV Eindhoven's Mark van Bommel. Since retiring in 2013, 42-year-old Van Bommel served as assistant manager for the Dutch Under 17’s, Saudi Arabia and briefly Australia. The latter two of those posts under his father-in-law, Bert van Marwijk. In the summer of 2018, after Phillip Cocu left PSV for an ill-fated time in Istanbul with Fenerbahce, van Bommel was hired as new manager.

So far, his managerial debut has been successful. With two rounds of the Eredivisie left, PSV and Ajax are joint top with 80 points from 32 games in a title race rivalling England for drama. Many argue that PSV being 2nd is nothing noteworthy given their status in Dutch football. However, to be matching an Ajax team who have knocked out Real Madrid and Juventus from the Champions League domestically commands respect.

After spending a season at Barcelona in 2005-06, Van Bommel is familiar with Spanish football. Plus Sevilla would represent a step up in career progression for the Dutchman over the Eindhoven outfit. One disadvantage, however, is that this is only his first season as a full-time manager. He may prefer another season in the stability of the Eredivisie with PSV to continue developing.

OptaJohan
OptaJohan
Follow
32 - @PSV are the first team in Eredivisie history to score a goal in each of the first 32 matchdays of a season. Prolific.
Follow
20:17 PM - 25th Apr 19
43
123
Today's football fixtures