Who will be Frank Lampard’s untouchables?

Effective decision-making is a prerequisite for every successful manager. Astuteness, ability to strategize, motivate players and control the dressing room count for plenty as well. They must also possess the nous for winning mind games, akin to Sir Alex Ferguson, Jose Mourinho and Arsene Wenger.

Frank Lampard will soon receive his litmus test. The Chelsea boss must prove he has the arsenal to succeed as a top manager. From what is known, the Englishman needs players he can absolutely rely on in order to thrive in his new role.

During his illustrious 13-year spell at Stamford Bridge, Lampard wasn’t just a fans-favourite, he was deemed irresistible by each of the 10 managers played under. Featuring 593 times for the Blues is proof enough.

Now, Lampard must identify and trust his own favourites. These are the guys he’ll forge Chelsea’s future alongside. Ostensibly the 41-year-old will look for talents who exhibit the same qualities he did as a player.

In truth, Lamps doesn’t have to search too hard to find the pillars of his side. Whichever formation he settles on, these five Chelsea players will no doubt start.

The Spanish goalkeeper caused a stir when Chelsea forked out £71 million to acquire his signature. Not long after, he did the same again when refusing to be subbed during the 2019 Carabao Cup final.

That doesn’t take anything away from Kepa's quality. He has displaced David de Gea as Spain’s first choice.

Con
ConnCFC
Follow
What a signing Kepa was for Chelsea..

Was so good last season and really proved he can be Chelsea's number one for many years to come. Definitely went under the radar a little so watch and enjoy.. https://t.co/HNawIaZNwp
Follow
08:51 AM - 6th Jul 19
214
1172

Lampard must know his first choice keeper already. Unless injury happens, Kepa will play every Premier League match in 2019/20.

Although his price tag is difficult to justify, he is proving worthy. Kepa continues to get better. It's something every manager needs.

It would be impossible for any team to bench this central midfielder. Actually, the worst thing a coach can do to him is to change his position. That's exactly what the chaotic Maurizio Sarri did this past season.

Chelsea has recently signed Mateo Kovacic. They also have Sarri's favourite to accommodate, Jorginho. Regardless, among their midfielders, Kante is the anointed one.

It’ll be interesting where Lampard chooses to deploy the Frenchman. Though, as everyone knows, the gaffer's style isn't as complicated as Sarri's. Expect Kante to return to his natural position.

The Spaniard has been Chelsea's most consistent player since 2014. Should Lampard need a loyalist, one who’s likely to go through the campaign without succumbing to injury, then here's his man.

Following Gary Cahill's departure, Azpilicueta is now club captain. Besides that, he played alongside Lampard for close to two years. Forming a good rapport between manager and defender shouldn't be a challenge.

Lampard is a firm believer in youth. Without a doubt, a few Chelsea youngsters will earn more minutes under his tutelage.

Of those, the Blues' most expensive is Pulisic. The USA international was signed from Borussia Dortmund for £57 million.

While Lampard will consider Pulisic to have huge potential, some fans are pushing for the attacker to assume an even bigger role, as Eden Hazard's successor. 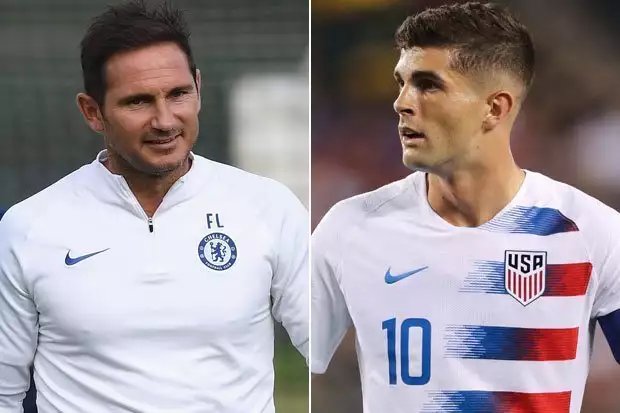 Vince™
Blue_Footy
Follow
Ian McGarry: “As far as I'm told and speaking to people at Chelsea, people close to Lampard, he sees a lot of potential in Pulisic. But he reassured Pedro and Willian that he's relying on them as the wide players and that Pulisic will alternate with Mount in the no. 10 position" https://t.co/mYV1kSWm4w
Follow
08:57 AM - 10th Jul 19
128
801

It’s a straight fight between Pulisic and Mason Mount for who lines up in Chelsea's midfield. The former is likely to win out due to being younger, faster and most importantly, more proven at the highest level.

Who steps up to fill Hazard's void?

Chelsea will cling tightly to Pedro, among others, considering their transfer ban. But it’s Willian who’ll produce the most for Lampard.

The Blues don't have an attacker capable of matching the 30-year-old's high work rate. It's questionable whether they possess a better dribbler than the Brazilian.

To fully impress Lampard, Willian must work on his goal return. Since joining Chelsea in 2013, he's never struck more than eight league goals in a season.