Should you be watching Uruguay at the Copa America?

The Copa America kicked off on Friday. Hosts Brazil knocked off Bolivia handily, 3-0. The Selecao, along with Argentina, began as many people’s tournament picks. That's usually the case although la Albiceleste now have it all to do after surrendering two late goals to Colombia yesterday. Meanwhile, fans and pundits tend to forget the nation who've won the tournament more than any other. Despite an ageing squad, Uruguay have every right to anticipate hoisting the trophy on 7 July.

This year’s Copa America consists of 12 nations split into three groups. First and second placed sides from each group will progress to the quarter-final stage alongside the two best-ranked teams finishing third. Uruguay are pitted against fellow South Americans Ecuador and Chile as well as Asian invitee Japan.

La Celeste begin their campaign tonight, taking on Ecuador in Belo Horizonte. Currently sixth in the FIFA World Rankings, they’ll feel confident of securing victory over a team sitting 53 places below them. On paper, Los Amarillos are the group’s weakest side. They weren’t good enough to grace Russia 2018 after finishing third-bottom in Conmebol qualification.

Beyond that encounter, Japan and two-time defending champions Chile await. Ranked 26th and 15th respectively by FIFA, both might be considered threats. Not ones to overly concern Uruguay, though. The Japanese sent a young squad with 16 uncapped players in preparation for Tokyo’s 2020 Olympic Games. Chile, like Ecuador, also failed to make the last World Cup. Their results haven’t improved since. La Roja beat Haiti and drew with the US, before going down to Mexico. All indications are Renaldo Rueda's side have returned to being a middling outfit despite the presence of Alexis Sanchez and Arturo Vidal. In fact, Sanchez's well-documented struggles at Manchester United only exacerbate the problem. 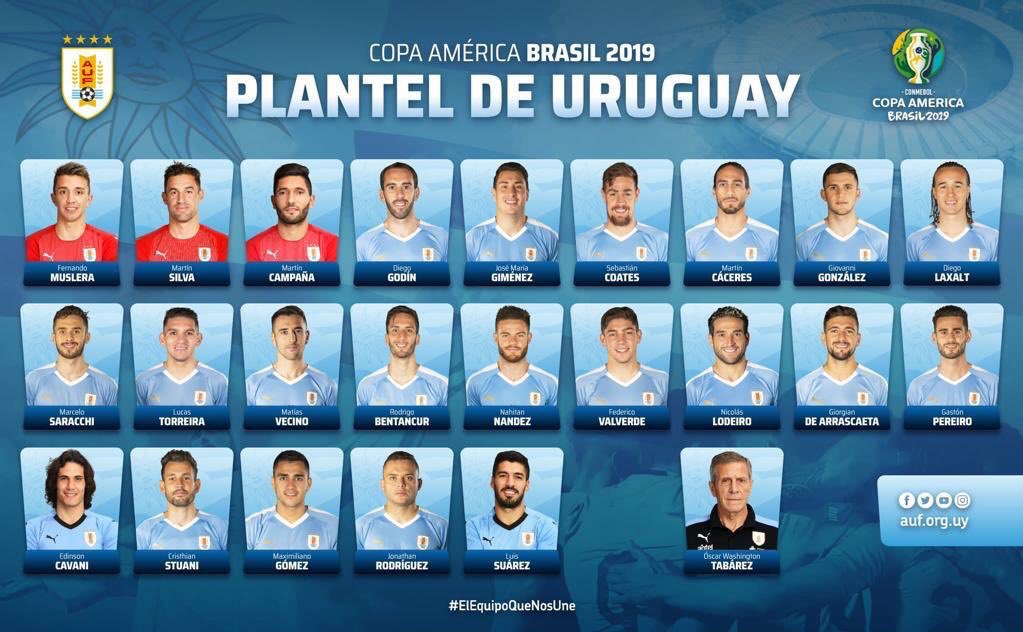 Uruguay coach Oscar Tabarez usually opts for his trusted 4-4-2 formation, adjusting slightly at times, with one striker dropping off when needed. In goal will be Galatasaray’s Fernando Muslera. His 10-year international experience coupled with 108 caps make him a valuable presence. At full-back, defensively-minded Martin Caceres adds the bite to go with Diego Laxalt’s durability. Veteran Diego Godin and youngster Jose Gimenez man the backline. Both are powerful, uncompromising ball-winners. Godin’s positional sense puts him as one of the world’s best centre-backs. Gimenez has the potential to become likewise.

La Celeste’s midfield is arguably their weakest area. Still, it has talent. Mattias Vecino and Rodrigo Bentancur were regulars this season for Inter Milan, Juventus respectively. The two can be relied on to form a dependable central partnership. Lucas Torreira’s tenacity is available in sticky situations, too. Out wide, Nicolas Lodeiro and Nahitan Nandez will likely take up position. What they lack in goals they more than make up for in technique plus work rate. Those attributes allow others further forward to shine.

Uruguay’s frontmen require little introduction. Luis Suarez and Edinson Cavani are both among Europe’s deadliest strikers. Each one’s sublime finishing touch rounded off with a poacher’s instinct has aided them in amassing a combined 102 goals for their country. Even should the unthinkable happen and the duo fails to perform, Tabarez can call on two other prolific marksmen. Girona’s Cristhian Stuani has struck 40 times in La Liga during the past two seasons, while Maxi Gomez recorded 30 goals for Celta Vigo in the same time period.

Uruguay’s two main rivals for the Copa America crown both have issues to resolve. Colombia proved Argentina's defence remains vulnerable. La Albiceleste kept one clean sheet in their last eight games. Not much has changed since Kylian Mbappe tore them apart at the World Cup. Nicolas Otamendi is formidable on his day but has no reliable partner. A starting place is guaranteed for either former Everton reject Ramiro Funes Mori, Tottenham Hotspur’s inexperienced Juan Foyth, or Fiorentina's German Pezzella, who himself has only eight caps.

Lionel Scaloni’s side also rely too much on Lionel Messi. The five-time Ballon d’Or winner is perennially expected to drag his nation to major honours even though he is yet to succeed. He needs assistance from Angel Di Maria, Paulo Dybala, and Sergio Aguero. The three haven’t shown true capability in crucial times for Argentina before, so why expect it now?

Tite must worry about bodies missing up front for Brazil. The Selecao have talent in those positions but their more experienced players aren’t in good nick. Philippe Coutinho is off the back of a disappointing debut campaign at Barca. Hitting a brace during the competition's opening contest won't have a bearing on the playmaker's effect in the latter stages where tougher challenges than Bolivia lie in wait. Willian’s standard has also dropped in the last 12 months. Roberto Firmino, meanwhile, performed sensationally for Liverpool, yet he’s not a renowned goalscorer. In internationals, his ratio is less than one goal every three games. He's nursing a recurring hamstring problem. Neymar, of course, is unavailable.

All that may leave the youth to pick up the slack. David Neres and Richarlison, both 22, are fairly new to Tite’s team. It’s a tall order tasking them to flourish in their first major competition. Striker Gabriel Jesus has consistently proven reliable. His 16 goals in 26 international outings will probably not be enough to keep Firmino on the bench, however. Neymar’s absence will have a huge effect. Brazil didn’t deliver as favourites in Russia last year. Such a failure could follow them home where they have twice failed to defend native soil in World Cups.

Should Uruguay top Group C, as anticipated, a quarterfinal against Peru, Paraguay, or Venezuela looms. All are decent teams, albeit none possess La Celeste’s quality. Argentina or Colombia are their potential last-four opponents. Suarez and Cavani’s goal-scoring prowess should prove too much for the Argentine’s frail defence. It will be a real shootout against Carlos Queiroz's Cafeteros.

Playing this scenario out, a matchup against Brazil is the final test. Uruguay’s rock-solid rearguard, led by Atletico Madrid pairing Diego Godin and Jose Gimenez gives them an excellent chance to reproduce the result from the 1950 World Cup. Don't bet against it.

La Celeste have the players at both ends to defeat any side. Their charges can show silky skills and a warrior-like mentality in equal measure. The former will take them to this Copa America final; the latter will push them over a momentous finishing line.