Is Achraf Hakimi giving Trent Alexander-Arnold a run for his money?

Trent Alexander-Arnold has been widely praised for his output for the soon-to-be-crowned Premier League champions, and rightly so. The 21-year-old is seen by many as the best right-back in the world at the moment. His contributions have been instrumental to Liverpool's success over the last two campaigns.

The Englishman broke records last term due to his assists as the Reds pushed Manchester City all the way in the Premier League title race in 2018/19. That earned the youngster a spot in the Guinness World Records 2020 for his record of 12 Premier League assists by a defender in a season. However, for a Reds fan, perhaps the highlight of his contributions to the team last season was an unforgettable Anfield masterclass that helped down Barcelona in the semi-finals of the Champions League. That single performance was instrumental to Liverpool winning the competition for the sixth time. This time around, he is playing a vital role in the Merseysiders' Premier League title charge.

But is Achraf Hakimi putting forth a similar performance in Germany and yet not getting the praise he deserves?

Many Real Madrid fans were hugely disappointed when Dani Carvajal gave away a penalty against Manchester City. That allowed the English side to score a second goal in a 2-1 win that handed Pep Guardiola's team the advantage ahead of the Champions League return leg. That strike could prove crucial if Los Blancos are unable to overturn the result. This is coming at a time when the man that should be fighting for Carvajal's position at the Santiago Bernabeu was sent out on loan. At Borussia Dortmund, Hakimi is bringing goals to the team rather than giving them away.

There’s the argument that Bundesliga defences don't compare well to the Premier League overall and so Hakimi could struggle to do the same numbers in the English top flight. Another line of thought also suggests that the Real Madrid loanee’s numbers look impressive because he supplies better finishers. Granted, Erling Braut Haaland is arguably the best finisher in the game today. But Sadio Mane and Mohamed Salah aren’t particularly a bad combination.

In fact, the Liverpool forwards have been better finishers than Dortmund’s top two of Jadon Sancho and Marco Reus, before Haaland showed up. Remember, the Norwegian started playing for Dortmund this January. Since then, Hakimi has made four league assists, the same as Alexander-Arnold.

But the Dortmund right-back excels Liverpool’s in the Champions League, a level playing field for both parties. He has scored four goals in the competition this season to Alexander-Arnold’s zero. Still, he does not get half the praise the Englishman receives.

A look at both players’ market value says it all. While the Englishman is valued at £99 million (€110 million) the Moroccan comes in at less than half that price, £40.50 million (€45 million). Perhaps we should begin to take Hakimi just as seriously as his English counterpart? 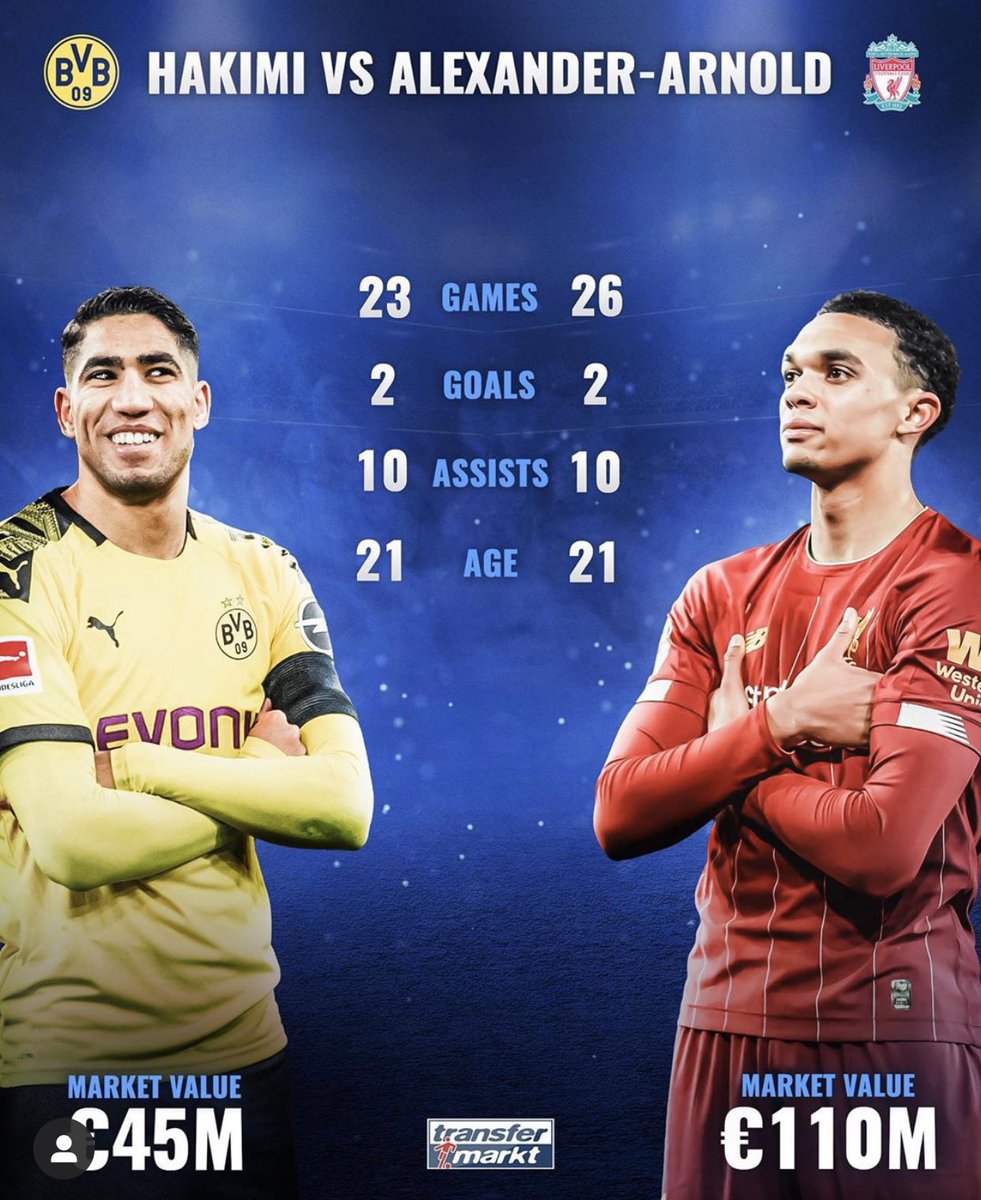