Adam Webster arrived in the Premier League last summer when Brighton matched their club-record transfer fee, paying Bristol City £20 million. He'd been with the Robins for a single season, coming over from Ipswich Town. He made 45 Championship appearances, third-most for Lee Johnson's side. He was the manager's defensive cornerstone. WhoScored rated him the division's seventh-best player. Brighton made an astute investment who will pay dividends on the pitch and in the transfer market.

Webster does more than progress the ball. He delivers it into enemy territory. Whether picking out the right pass or driving forward with the ball at his feet, he makes good decisions and is rarely dispossessed. He completes 63 passes per 90. The 17 in the opponent's half better every forward and midfielder in Graham Potter's squad.

Webster's footballing brain is a masterpiece. He makes two interceptions per 90, joint-most with midfielder Dale Stephens. Before coming to the AmEx, he always played in deeper defensive systems. While right-footed, he played on the left side of the box for Bristol before tucking in on the right for Brighton.

The man is also a serious set-piece threat. His three goals all derived from dead-ball situations. The 6'2 Chichester native heads the ball powerfully as both Tottenham and Arsenal can attest.

Even as he fills out his frame, the 25-year-old remains agile. He wins five duels per match with a 60% success rate. He covers ground quickly, enabling him to deal with pacey forwards on the counterattack. His anticipation and timing are sublime. Essentially, he is everything Manchester City hoped to receive in John Stones.

He doesn't exhibit any noticeable weaknesses. Positionally sound, he rarely throws himself into rash challenges. Webster possesses the skill set and mentality to be a regular at a top Premier League club. He is a prototypical contemporary centre-half. 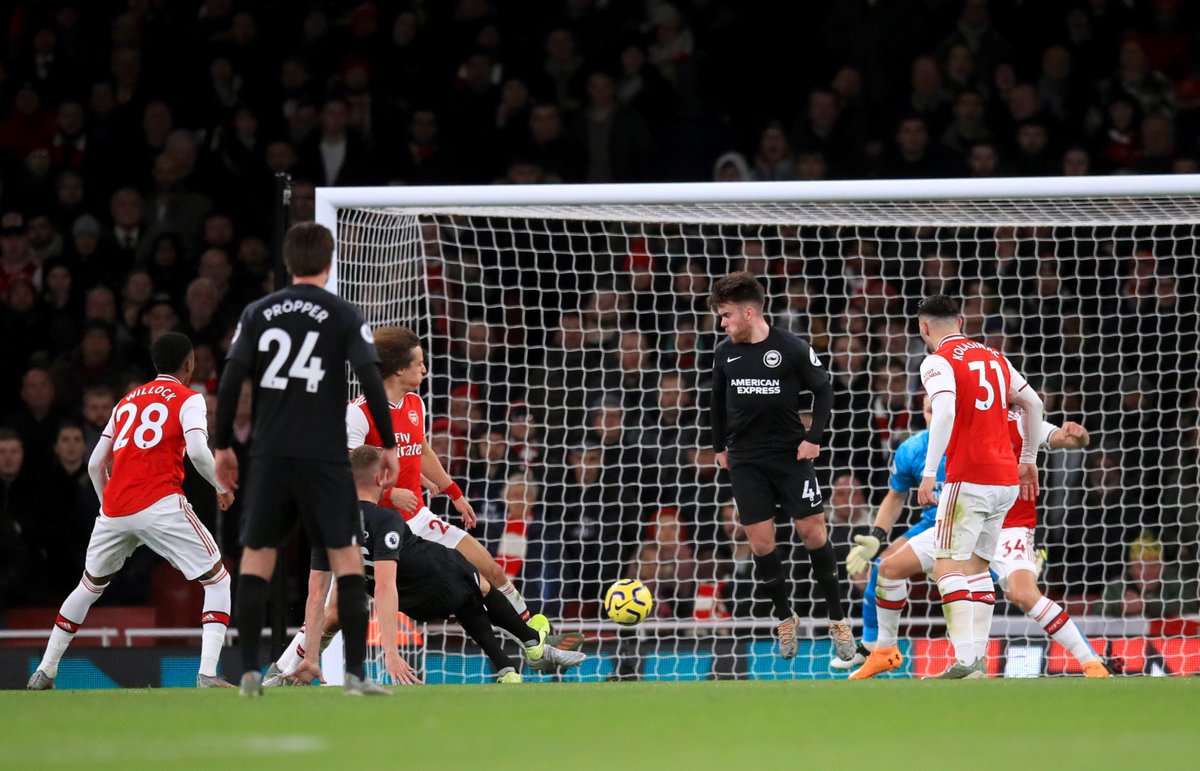 Squawka Football
Squawka
Follow
⚽️ vs. Arsenal at the Emirates
⚽️ vs. Spurs at the Tottenham Hotspur Stadium

Brighton’s rearguard is overstocked. Beyond Webster, Potter can call on Lewis Dunk, Dan Burn, and Shane Duffy in his three-man defence. Duffy is the most underwhelming but Ben White, on loan at Leeds United, is arguably the Championship's best young defender.

Sitting 15th, the Seagulls don't exactly soar four points above the drop zone. Potter remains confident the South Coast side will stay up under his guidance but it's hardly job done at this point. Nigel Pearson's Watford look reenergized. David Moyes is a better tactician with a stronger side than recent results at West Ham indicate. Brighton's schedule challenges the manager's belief. Fixtures against Arsenal, Manchester City, Manchester United, Liverpool, Wolves, and Leicester make for a difficult gauntlet to run.

That said, survival is imperative. Three-quarters of Brighton's revenue comes through their Premier League status. Given their financial strain, Brighton may be a selling club even if they stay up. The Seagulls record the second-most debt in English football. Their reckless spending in the transfer window accounts for £230 million across three seasons with only £15 million recovered in player sales. In contrast, their comparatively low wage bill makes it difficult to keep their best players.

With Webster the exception, new arrivals tend to put in sub-par performances. The rarely-used Alireza Jahanbakhsh was the Eredivisie's top scorer before coming over from AZ Alkmaar. Starting in just 11% of Brighton's matches this term, he contributes a disappointing six goals and two assists this term. To improve or simply remain competitive in 2020/21, Potter will likely need to sell from a position of strength to reinforce his weaker departments. Brighton stand to make more than double their investment on Webster if they shop him to a top-six club.

Arsenal desperately need a centre-back. Mikel Arteta's rebuild currently relies on David Luiz and Sokratis Papastathoupoulos, both in their 30s. William Saliba arrives in London next summer. He and Webster could be a strong partnership at the Emirates.

Jan Vertonghen is rumoured to leave Tottenham in the summer. Jose Mourinho isn't quite sold on Davinson Sanchez as Toby Alderweireld's partner and Japhet Tanganga remains a raw talent.

Manchester City's title defence disintegrated following Aymeric Laporte's injury. The Citizens never replaced Vincent Kompany. Fernandinho dropped back to help out but the Brazilian is 34. Pep Guardiola displays only marginal confidence in Nicolas Otamendi and virtually none in John Stones.

Frank Lampard's Achilles heel at Chelsea is the rearguard. At 20, Reece James holds promise but none from Kurt Zouma, Andreas Christensen and Antonio Rudiger provide consistency. The Blues reportedly want to buy back Nathan Ake from Brighton but Webster is an excellent fit too.

Inevitably, the defender will leave Brighton. His potential should put him at a much bigger English club and from there, possibly the national team. He is that good.