Aleksandr Golovin finally on firm ground at AS Monaco

Signed as the breakout star of the 2018 FIFA World Cup, Aleksandr Golovin was tipped for greatness at AS Monaco. Conventional wisdom held that the principality was a brief stop on the Kaltan native's rise to the big time. His lights and automobile crashed in his first year.

This season, however, they are back. Well, it's probably a new car, but you get the idea. Golovin demonstrates the quality that first captured the world's attention. The playmaker is creating chances and converting opportunities, seven of the latter across all competitions. He's been awarded Monaco's MVP in four matches, the most by any player.

He sprained his ankle again in November, continuing his downward spiral. The club wrote off another 17 days. His struggles compounded Les Monegasques relegation plight. Upon his return to the managerial role, Leonardo Jardim was at first forced to look elsewhere for the side's salvation.

Golovin ended the campaign with three goals and four assists. His form picked up considerably towards the season's latter stages, crucial as Monaco avoided relegation by just two points. This season, however, Golovin makes amends for time wasted.

The 23-year-old began the campaign like he did the last.  Not selected for the opening day loss to Lyon, Golovin put in an abject display from the No.10 in the subsequent defeat to Metz. Monaco had lost its two opening matches by 3-0 scorelines. Jardim attempted different systems, utilising the Russian deeper in a 4-4-2 then as part of a central midfield trio with Cesc Fabregas and Tiemoué Bakayoko for company. Jackpot.

With more of the game in front of him, Golovin flourished. He enjoyed the chance to stretch his legs and showed promise in the 0-0 draw at Stade de Reims. He followed that up with an assured performance at home against neighbours OGC Nice. Golovin was directly involved in all three goals in that match. 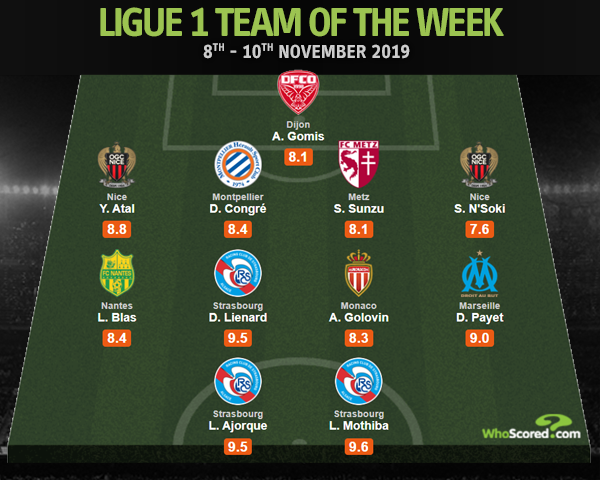 Les Rouges et Blancs opened against the visitors in the 29th minute when Golovin fired the ball into the top corner for his first goal of the season. Nice levelled the tie just after half-time through Patrick Burner. The Russian restored the lead after a long ball found Islam Slimani, who went around his defender before squaring to his teammate. Golovin then turned provider, sliding the ball into the box for Wissam Ben Yedder to turn home.

Nominally right-footed, Golovin uses both feet as his brace against Nice attests. His sprint speed is matched by an extra yard in his head. Despite his small frame, he moves the ball forward at pace while maintaining control and awareness. He knows just when to release the ball, how and where to send it.

Gifted with set-piece ability, Golovin is yet to fully flaunt this trait in France but his larger body of work in Russia and at the World Cup came from dead-ball situations. As well as dribbling, the midfielder's passing levels are on course with football’s elite. With Slimani and Ben Yedder upfront, he is assured that chances provided will be buried. Best, his versatility provides Jardim with tactical options.