An Alternative View of the Beautiful Game

Like any focal point of popular culture, whether it be sport, music or the arts it can be easy to concentrate on milestone moments or the upper echelon of superstars. In Football FAQ , Dave Thompson offers an insight into the lesser known stories and heroes of football and in doing so, cuts through the “paraphernalia with which the game likes to bedeck itself”. 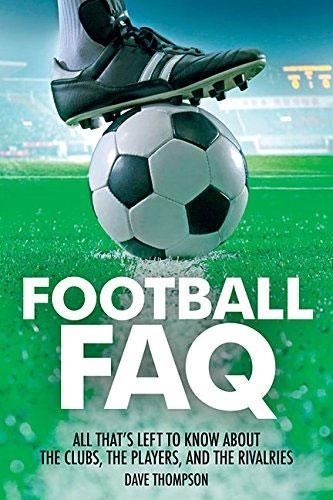 ItsRoundAndItsWhite
RoundAndWhite
Follow
We have 4 copies of Football FAQ to give away, to win just follow us and RT this message, winners will receive a DM http://t.co/7PlRpbjcDa
Follow
12:24 PM - 1st Jul 15
187
12
Based in the United States, Thompson appeases the British contingent of his readers early on by excusing his use of the word ‘soccer'. The initial pages give clarity to, firstly, the book itself and then a wider perspective to the game as in truth all you need is “something to kick and something to kick with”. An early call to arms for any fan who may be tired of the serious and self-indulgent world of modern football. You get the impression Thompson includes himself in that group.

It is US soccer that forms the basis of the opening chapters, how a young English fan saw at first-hand the fervour and passion for which Americans approached the game in 1972. Thompson's encounter with the Wellesley Pilgrims is a story which most avid followers can relate to when recalling the infancy of their love affair with football. Snippets and clippings of memorabilia throughout the pages add to a sense of nostalgia and give the reader an urge to dig through their own collection of programmes and ticket stubs.

This book is uncomplicated, with slight changes in topic designated by an apt heading, and straight forward for it to be read front to back or dipped in and out of.

What is striking is the vast depth of knowledge and information worked into the story of early football in the States which, even for the most knowledgeable of followers, is a real eye opener. Who knew that the foundations of England's only World Cup win came from West Ham's victorious tour of the US in 1963? The themes of too many foreign players infiltrating the national league and businessman looking to franchise clubs is nothing new either – it was rife in the National American Soccer League prior to its financial demise in the late 80's. Thompson does not shy away from the skeletons in the closet of football, discussing hooliganism, violence and corruption and the status they still hold in the game.

The founding fathers of British football are next on the agenda, with even the earliest forms of the Football League following a similar patter to that of the present day. A select few dominated while others struggled with the pressures of relegation or the mediocrity of being the best of the rest. The British game and first established league gave rise to football fever throughout the world, leaving the game out on its own as the only sport “within 50 years of its inception to conquer the globe”. Thompson covers an array of plots and teething problems around the start of the 1900's as betting, international competition and the magic of the Cup took hold. Although the reader may encounter the odd tangent of political reference or personal opinion, each argument is backed up by fact and a historical reference to football's development. The substantial level of information and detail sometimes has you wondering which way to look but affirms the piece as an essential part of a football guru's learning process.

Each chapter adds another layer of understanding as to why football has become the behemoth that we know today, highlighting some of the uncredited success stories of British football such as Darwen and Queens Park. The Scottish side even participated in the very first edition of the FA Cup despite the obvious geographical issues behind playing fixtures pre-1900. The most compelling story of the book links to Darwen and their heroic effort in trying to overthrow the Old Etonians in the 1860's, returning to London on several occasions funded by the local people of the North West town. The emotional venture of the Lancashire team heightens the same sense of injustice felt today that “both the laws of the game and the people who make those laws are blindly in favour of the wealthiest few.” If ever there was a reasoning for the Cup to be held up and worshipped as the ultimate competition then Thompson's “The Greatest Competition in the World” chapter truly echoes the feeling of most fans of traditional football. Where cup success was of paramount importance before being washed aside by the commercialism of league football. Evidence that some 7500 teams enter the French equivalent of the FA Cup shows that the smallest of fish are still enchanted by the spell of Cup glory.

The ambiguity of answering the impossible question of ‘who is the best' is stoked further by Thompson's compelling arguments for players and managers that may have been omitted from more mainstream forums. Nestor Rossi, Anton Schall, Bela Guttman and Stefan Kovacs all with their own remarkable football career.

The writer successfully encapsulates some of the emotions that lace the life of an often tortured supporter, particularly those who may follow an underdog into battle against the best and biggest in the land. Referencing some of the great victories by minnows of days gone by, attention is given to the masses of people drawn to a great upset no matter who they support. One emotion that can be shared by all readers in the toe curling wince of embarrassment in Thompson's witty account of football pop songs that somehow made it into the public domain, although his list does omit ‘On the Ball' by Ant and Dec. All can agree that singing in football should be left to those on the terraces.

Football FAQ somewhat undersells itself in title as this book is more than a glossary or simple timeline of events throughout history, it is a vast chasm of unknown and previously untold stories to sport fanatics. A true wake up call for anyone that has claimed they know all that there is to football and its monumental impact on the world around it.

Football FAQ is published by Backbeat Books and can be purchased from Amazon.co.uk for £13.48 on paperback or £12.81 on Kindle or you could enter our competition below to win a copy of the book.

James Dean
A lover of football. Season ticket holder at Sheffield Wednesday and known as the "Andrea Pirlo of the North".