Another one bites the dust: which Premier League manager is next?

After being humbled by Chelsea, West Bromwich Albion lost patience with Tony Pulis. He was gone by Monday morning. The Welshman left the Baggies in a precarious 17th position in the Premier League having failed to win since August. So, his dismissal wasn't a surprise.

Pulis became the season's fifth managerial casualty in the English top flight. Which manager will follow him? We go through the likely candidates.

Hughes has been at Stoke City since summer 2013, but he is losing his stronghold on the manager’s job with each passing week. Results and table positions have gradually declined, with the Potters finishing 13th last time out (their lowest place under Hughes).

Stoke's lack of exciting signings has also been a problem, leaving the fans pessimistic about their chances this season. Although the club's marquee signing last summer, Jese Rodriquez, began life in England on fire, he has since dwindled down to a petty flame. The Potters spent just over £25m in last transfer window. If that's compared to their Premier League rivals, it’s not nearly enough.

Hughes has faced increased pressure recently due to his side's poor form. They’ve picked up only three wins all season and sit in a lowly 15th. For a side fighting for European qualification not too long ago, it's not acceptable.

Another factor in Stoke's downfall is the stadium. Strangely, the element of fear has been lost since its name change. There was a time when every team in the country used to dread travelling to the Britannia, but now the Bet365 Stadium is an easy place to compete. In fact, the Potters have picked up only eight points from a possible 18 at home this season. Things must improve if Hughes is to avoid Pulis' fate.

With Tony Pulis now on the market, Swansea may look to bring in a more experienced manager to help lift the side away from danger.

Clement started life as a Premier League manager in impressive fashion. He guided the Swans out of the relegation zone into 15th place, ensuring that Bob Bradley's disastrous spell in charge was quickly forgotten. However, Clement's side have tailed off massively this season. They sit in the relegation zone with just one win in their last seven league games. It came against Huddersfield at the Liberty Stadium – the Terriers have not won an away game since they joined the top division. That was Swansea’s only home win all season. They have also failed to score many goals in front of their fans.

Clement tried to replace Gylfi Sigurdsson after his move to Everton with a host of young talent. It’s fair to say neither Sam Clucas or Renato Sanches have hit the ground running. The Swans manager boasted about his contacts in the summer when he brought in Sanches, but it hasn’t worked out so far. Although Tammy Abraham has been a key player, which earned him international selection, he is only on loan and offers no long-term solution.

Clement is skating on thin ice. He should ask his unemployed friend, Carlo Ancelotti, for some advice or risk joining the Italian searching for another job. 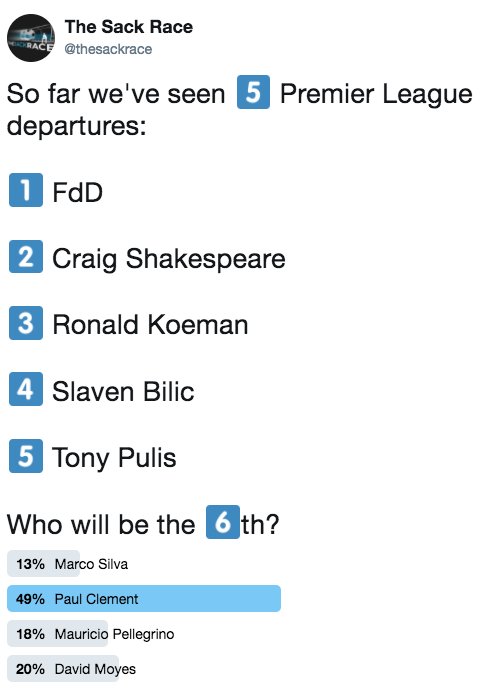 The Swansea boss is priced at 3/1 to be the next Premier League boss to leave.

Another year, another new manager at Southampton. This one might not last much longer though. Pellegrino was brought in to replace Claude Puel last summer, but he has had little success up to now.

Pellegrino has a decent track record having guided newly-promoted Alaves to a top-half finish in La Liga last season, along with a Copa del Rey final. Upon arriving at Southampton, his experience showed to keep hold of Virgil Van Dijk. The Saints boss also signed another Dutch centre-back, Wesley Hoedt. Mario Lemina was the only other major signing. He's embodied the club's season so far – some flashes of brilliance but average on the whole.

Puel was sacked due to his negative football, especially at St. Mary’s. Pellegrino’s team have arguably been as boring. They’ve averaged just 0.5 goals per home game this season in the Premier League - If they continue like that they’ll finish with 19, two fewer than Puel’s side.

Southampton fans are becoming impatient with their manager, who seems to lack any sort of charisma or motivational skills. With Ronald Koeman lurking, it could be déjà vu for Pellegrino at the south coast club if the situation doesn't improve.