Are Middlesbrough defending their way back to the Premier League?

The Riverside Stadium front, by Julia (CC BY 3.0 (https://creativecommons.org/licenses/by/3.0)), from Wikimedia Commons

Is defence the best form of attack? Can a defence be the main cause of a promotion push? These are the questions that have to be addressed at Middlesbrough Football Club. Currently third, they possess the best defence in the English Football League for conceded goals. But could they defend their way back to the Premier League?

Middlesbrough's most recent result ended as a 1-1 draw with Derby County. Despite George Friend's unlucky own goal against The Rams, Boro's defence has been solid. After 15 games played, only eight goals have been let in. Eight clean sheets have also been kept by a solid back line and an in-form goalkeeper, Darren Randolph.

Tony Pulis has implemented a 3-5-1-1 recently, resulting in two draws and a win from the past three games. The back three contends of usual rotations. These players include Aden Flint, Daniel Ayala, George Friend, Paddy McNair and Dael Fry. Ryan Shotton is out with a knee injury and has been an important player so far this season.

The attack is probably the main weakness. The squad has only managed to strike 17 times. Britt Assombalonga is the top scorer so far with just five goals. From a team in second place you'd expect the top scorer to have a few more. With that being said, they are getting the results. Even against Derby, they had 10 shots but none were on target. It is surely an aspect to be worked on and Pulis knows that. 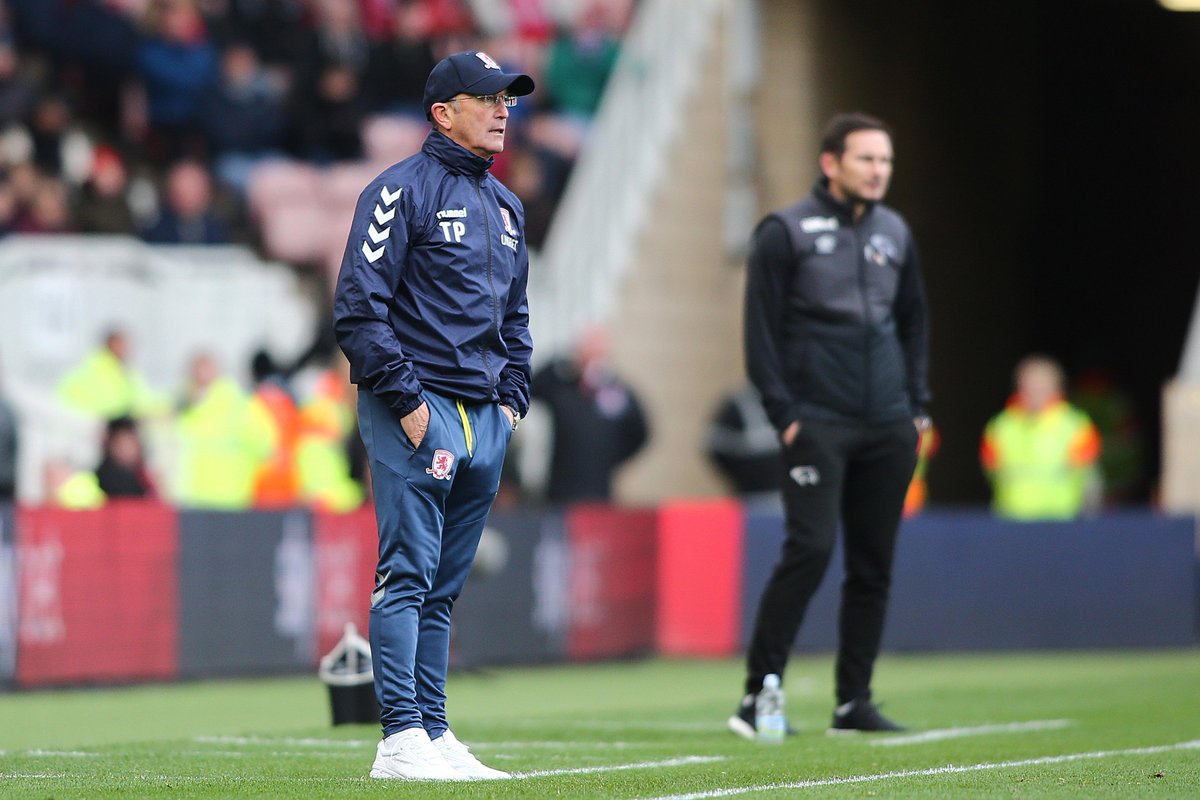 Middlesbrough FC
Boro
Follow
"It got a bit ragged, but the lads kept at it and it's a great point gained" 🗣️💬

During the 2015-16 campaign, Aitor Karanka was the club boss. Boro were promoted to the Premier League and what was the key to their success in finishing second? A rock-solid defence. Only 31 goals were conceded which ended up being vital. The automatic spot was clinched only by goal difference. With the way this season is heading could history repeat itself?

The next fixture is up against Stoke City, Pulis' former club. With the fixture being away, at a notoriously tough ground, this will be another close-knit game. The Potters have picked up form recently, only losing one from their last five. Keeping the opponent at bay could well be the formula to another good result, as Boro are hardly going to outscore many teams in a multiple-goal thriller.

Last season's playoff failure is a target to better this season. Losing to Aston Villa during the semi-finals was a gut-wrenching blow for all Middlesbrough fans. They know that this year is the one to push on and make sure an automatic spot is sealed. Or even a title shot.

The characters of players such as Flint and Ayala are key to a solid back line. Flint joined the club from Bristol City during the summer and Ayala is spending his sixth season at The Riverside. Both these centre-backs are crucial in any sort of promotion hopes that Pulis and his side hold. But when it comes to any game they need to be consistent.

So with a defence like a brick wall could Middlesbrough defend their way again to the Premier League? Like we've mentioned before it has been done a few seasons ago. There is still a long way to go but Tony Pulis has the chance to guide the North Yorkshire club back to the promised land.