Arminia Bielefeld’s recent form [one win, one loss and three draws in the last five matches] makes for patchy reading. Don’t let it fool you, though. Arminia still ride high at the 2.Bundesliga summit ahead of established names like Hamburger SV and VfB Stuttgart. Credit the excellent work of Uwe Neuhaus who lifted the squad from a relegation battle to a comfortable mid-table finish last season. That said, any stability is contained within the white lines. Off the pitch, the club perseveres against shenanigans, including extensive club debts that led the North Rhine-Westphalia club to sell their stadium.

Die Blauen’s season began slowly, a pair of draws highlighting the good and bad in equal measure. Star striker Fabian Klos, a club veteran who has surpassed a century in goals over nine seasons, made the scoresheet on matchday 2. From there, Arminia began putting teams to the sword. Multiple goals in five successive games revealed the Blues' attacking prowess, an element to their play that Neuhaus always prioritises. His 4-1-4-1 formation never leaves Klos isolated. The captain can rely on support and hard work from Marcel Hartel and Andreas Volgsammer.

A September loss to Stuttgart exposed the team’s shortcomings. Arminia bravely tried to match Stuttgart’s 4-3-3 to control the midfield. The tactical gamble backfired. Volgsammer and Soukou were marked out of the game. Klos was unable to make a mark and was sent off in frustration just past the hour mark. Creative spark Hartel was shut down, his pinpoint passing and ability to find the killer ball hugely diminished.  Stuttgart’s quality shone through thanks to midfield triumvirate Atakan Karazor, Santiago Ascacibar and Orel Mangala. The latter claimed Man of the Match honours. Through Hamadi Al Ghaddioui, the former Bundesliga champions took a priceless win from the Bielefelder Alm, handing the home team their first league loss.

Ex-Bundesliga stars and German journalists queued to predict the death of Arminia’s shock title charge. Hamburg and Stuttgart would simply steamroll the minnows into sardines as the bigger clubs vied for the two automatic promotion spots to their rightful places in the top flight.

But the minnows showed more bite than naysayers anticipated. Re-organised, energised and motivated to prove the consensus wrong, Klos and Co took five wins and four draws from their next ten, leaving them with a credible 19-point haul in one of the world's most competitive, topsy-turvy leagues.

Arminia rely on cheap signings, clever loans and free transfers. The entire starting XI is valued at less than Hamburg’s injury-prone central defender Kyriakos Papadopoulos but the squad is thin. Their short bench was exposed just before the winter break. St Pauli crushed them 3-0.

So much of the Blues' hopes rest on Klos’ shoulders. He is the league's top scorer with 17. Only he and Andreas Volgsammer register in double figures for the club, with 30 strikes between them. Remove them from the equation and the goals evaporate. Joan Simun Edmundsson's four goals are third-best in the side.

Normally, January transfer window would be a crucial time but their financial woes deny the opportunity for Neuhaus to reinforce his squad. The manager can only hope the time off will be sufficient to recharge a squad filled with nearly drained batteries while Hamburg and Stuttgart eye up multi-million euro signings to reinvigorate their promotion hopes.

If Arminia continue their surprise title form, Fabian Klos will mark his tenth year at the club with a first crack at the Bundesliga. The popular Uwe Neuhaus will achieve a spectacular turn-around, considering the club's state when he joined. Above all, neither Hamburg nor Stuttgart, two proud old names, will claim a title expected to be a formality.

On the other hand, the Blues could find themselves drawn back into the chasing back. Finishing in the table's upper half would remain a massive achievement but, like two points dropped rather than one earned, it would be a depressing let-down. For now, at least, devout Arminia Bielefeld fans who’ve suffered so much in recent years, can dare to dream. 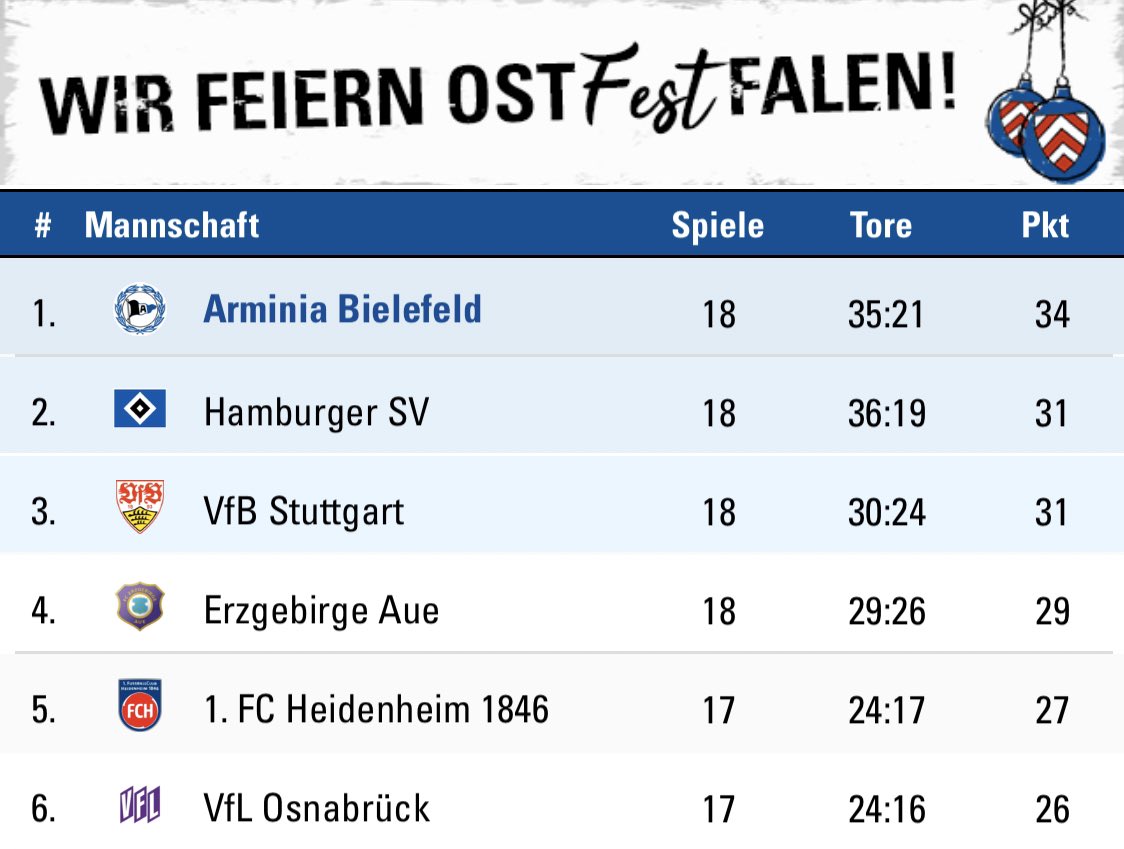 The uninitiated in the more obscure realms of football folklore may believe Jurgen Klinsmann ended his playing career with Tottenham Hotspur in 1998 via a short spell at Sampdoria.…