By Warren Smith
Arsenal Arsenal F C British Football Graham Arnold Lacazette Match Reports Premier League Sead Kolasinac Slider Articles Sydney F C
Arsenal kicked off their Asian tour with a game against the champions of the A-League, Sydney F.C. Unsurprisingly, the Gooners won. What can we dissect from the victory though?

Lady luck smiled upon me, my rota-d day off and the Arsenal are playing the other side of the world meaning if it was on a working day, I'd probably miss it because of the time difference. But no, 11 am – bang, Premier Sports, watching football in the middle of the day on a week day. Excellent. The first time to get a look some of the new recruits, as well some of the promising youth prospects.

The pre-match build-up wasn't too long but it certainly set the scene for the game. The ANZ was seemingly decked out in red for the for what should have been the away side. Arsenal, however, was clearly the favourite side amongst the 80,000 strong that were in attendance. 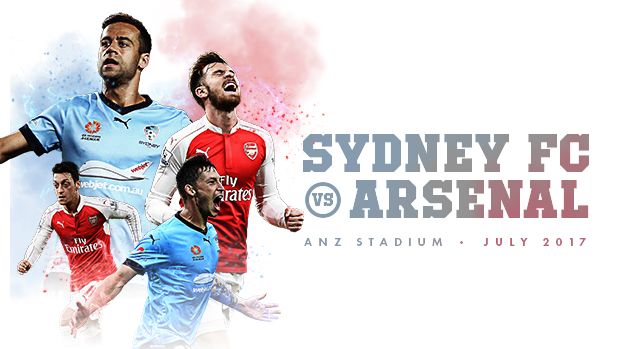 Streams & Highlights
HighlightStream
Follow
Today at 3.30 pm in Pre season friendlies it's Sydney FC vs Arsenal FC. What's your score prediction? https://t.co/udtmdbpKRX
Follow
06:35 AM - 13th Jul 17
0
0
Most entering the stadium, even Graham Arnold (the Sydney F.C.) manager will have probably expected Arsenal to win the game and do so comfortably. He went on record and said the game would be an “honour” for him and his team. Clearly making a tribute to the gulf in class between the two sides, but also praising Arsenal for their enormity and popularity in the world game.

The line-up and the initial seconds of the game saw that Wenger kept his word; and started with a back three. A tactical move which is proving very popular in the Premier League and one that Arsenal have adopted since the end of last season. Sead Kolasinac and Cohen Bramall starting alongside captain Per Mertesacker in defence. You couldn't make this up, our new defensive signing, our long-time absentee and the chap we signed from the non-league all lining up in Australia together.

It didn't take long for Arsenal to show just how good they are. Per Mertesacker found the ball at his feet from a very early corner and tucked it away. Arsenal had taken the lead inside three minutes of play. A credit to just how good the big German is and how useful he can be; in truth, we missed him and his leadership qualities last season. He'll be important to us in the upcoming campaign.
The rest of the first half went terribly fast, with Arsenal enjoying a lot of time on the ball. Theo Walcott kept on cropping up with half chances, his positional play was very insightful. That said, he was overshadowed by the work-rate of Danny Welbeck. Danny took the game very seriously, trying to embed himself in the line-up. He also looked very diverse in his thinking, he would drive forward himself and craft chances for both him and others, as well as taking it out wide and trying a few crosses.

Amidst the senior players, there was a younger figure on the pitch. The 17-year-old, Reiss Nelson. The youngster was sensational throughout this (sort-of) first team debut. He was always aware of the game, primarily looking to attack but knew what he had to do at the right times. He ploughed forward with the rest of the team, finding appropriate channels. His link-up play was exceptional for a man of his age, he combined with first-teamers like Danny Welbeck and Mesut Özil like he had been playing with them for decades. Wenger has even stated that he is knocking on the door of the first team.

It wasn't until the 36th minute of play for Sydney to have their first real attack that wasn't broken down by the Arsenal midfield or defence. Even then Petr Čech made light work of it. The rest of the half came and went with no real incident.

The first major talking point about from the second half would be the penalty. Theo Walcott fired a shot which was goal bound, however, Sebastian Ryall got in the way. The referee thought he saw him use his hand and a penalty was awarded. Although conclusive video footage shows the defender used his back. No hands involved. The footage was shown around the stadium and made for a very awkward setting. Sydney F.C. wronged, Arsenal the recidivist of the referee's errors. Welbeck stepped up to take it but was approached by two Sydney F.C. players who were goading him to intentionally miss. A bit of gamesmanship, given that everyone had seen the footage and now knew that the penalty was an injustice. Un-phased however, Danny took a shot at goal regardless – yet it was stopped by their keeper Andrew Redmayne. That actually summed up the Aussie keeper's game, unflappable. Wenger even praised the opposition keeper; and omitted he may have made a mistake in not signing him when he was on trial at Arsenal some 13 years ago.

Shortly after changes rung out across both teams, with Arsenal seemingly rotating the pack almost completely over a few minutes. The most noteworthy substitution being the introduction of Alexandre Lacazette. The record-breaking Arsenal signing looked lively as soon as he got on to the pitch. It wasn't long until he made a mark on the ANZ Stadium. Iwobi found the Frenchman in space and the new boy introduced to the Arsenal contingent in scoring style.
Highlights from the game.

In culmination and bullet-point form we have found out:

Yes, it's only a friendly against Sydney F.C. and nothing has been won nor lost. But was our first glimpse at the 17/18 Arsenal side and it looks exciting. Here's hoping the side keep it up into their next game against the Western Sydney Wanderers and the upcoming season.