Neymar's big-money summer move to Paris Saint Germain came as a real shock. The Qatari Investment Authority flexed its financial muscle in activating the Brazilian's €222 million release clause. Barcelona, of course, had no intention of offloading its superstar prior to PSG's huge offer. In the end, though, the move went through.

To add insult to injury, Barca were dismantled by Real Madrid in the Spanish Super Cup final, losing 5-1 on aggregate. The Catalans learned a lesson: Neymar would be missed. Blaugrana were uncharacteristically toothless over the two-legged tie. At the time, one would have thought they would struggle this campaign.

So how has Barcelona gone from a club destined for disappointment to one with eyes on the treble?

Forbes magazine ranks Barcelona as the world's third-richest football club. The time had arrived to start putting its huge financial depth to good use.

A lack of game changers on the bench caused setbacks for Barca last season. As a result, four major signings have arrived since Neymar's exit.

Barcelona now possess outstanding players both on the field and bench.

The new signings have fitted in nicely at the Nou Camp. Paulinho, in particular, has excelled, popping up with 8 La Liga goals in 19 matches. Despite injuries restricting Ousmane Dembele to only seven appearances, there have been enough signs to suggest he will succeed in Catalonia. As for Philippe Coutinho, the world eagerly awaits his Barca debut.

Barcelona added another player on Thursday when youngster Ballou Tabla signed from Montreal Impact. The Catalans transfer dealings may not be over, though, as the search for reinforcements continues.

It was clear Messi wasn't his usual self in the season's opening weeks. Perhaps he, too, was mourning Neymar's loss. Nevertheless, the Argentina international has returned to his mercurial best in the past several months.

Ernesto Valverde's decision to play Messi in a free role is working to perfection. As well as 8 assists in La Liga this season, the five-time Ballon d'Or winner has found the net a staggering 19 times.

Messi has been the key factor in Barcelona's success over the past six months, providing many spine-tingling dribbles, along with extraordinary vision. The Argentine is rejuvenated. His exceptional form is the main reason for Barca's aura of invincibility this campaign.

If the current level of consistency continues, Messi will surely claim his sixth Ballon d’Or in December.

A fixation on trophies

After splashing the cash to upgrade the playing squad, coupled with Messi's revival, Barcelona expects to collect major silverware this campaign.

Blaugrana have a healthy lead atop La Liga. They have also reached the Copa del Rey semi-finals and Champions League last 16.

Barcelona remain unbeaten in this season's Spanish top-flight, having won 17 and drawn 3. Real Sociedad threatened to end that run two weeks ago. The Erreala took a two-goal lead against the league leaders at the Anoeta. However, Barca exerted their superiority to score four unanswered goals. 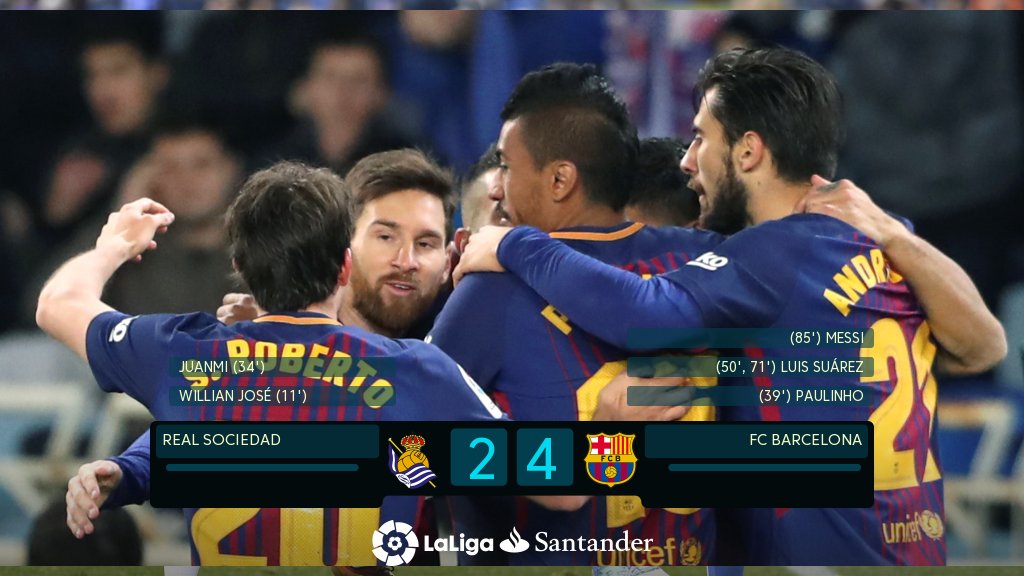 LaLiga
LaLigaEN
Follow
.@FCBarcelona fight back to maintain unbeaten run in #LaLigaSantander and to break their Anoeta jinx!

With an 11-point cushion over their nearest challengers, Ernesto Valverde's side seem unstoppable in La Liga. They have also left the defending Spanish champions chasing shadows, creating a 19-point gap between fierce rivals Real Madrid.

With Real and Atletico Madrid eliminated, Barca claimed the clear favourites tag to lift the Copa del Rey trophy. Despite slipping up away at Espanyol in the quarter-final first leg, Blaugrana recovered at the Camp Nou, winning 2-0. Next is a tie against in-form Valencia.

Reigning Premier League champions Chelsea provide an obstacle in Barcelona's quest for the treble. The February-March Champions League tie will be hotly-contested as the two teams have a score to settle.

Chelsea, though, should concentrate on domestic competitions. Finishing in the League's top-four and winning the FA Cup remains a realistic ambition for the Blues. Defeating Valverde's men will prove almost impossible.

Barcelona's relentless form means winning trophies is inevitable this season. It's just a question of how many.