In contemporary football, fullbacks became integral to how teams set up in attack and defence, often in that order. They stretch defences and open space organically. Zinedine Zidane used Marcelo and Dani Carvajal, spraying crosses into the box for Cristiano Ronaldo and Gareth Bale to win the Champions League three times in a row.

In England, Jurgen Klopp and Pep Guardiola engage full-backs in both phases of play. Liverpool’s Andrew Robertson and Trent Alexander Arnold are household names. No pair create more goals for their team. Although it has borne less fruit, Guardiola’s massive investment in full-backs attests to their importance to the Catalan.

Brendan Rodgers follows suit. Leicester boast English football's best defence, conceding only ten times in 16 matches. Ricardo Pereira and Ben Chilwell guard the flanks and, when the ball is won, make overlapping runs in the final third. Rodgers takes a similar approach to Klopp and Pep when it comes to fullbacks. The attention Chilwell and Pereira draw creates acres of space in the middle where Youri Tielemans and James Maddison thrive.

Chilwell developed into one of Europe's best attacking full-backs when Claudio Ranieri inserted him into the squad in 2016/17. His breakout campaign came under Claude Puel the next season, making 24 appearances. In 2018/19, he stepped it up again, a regular in the lineup as Leicester finished ninth.

Chilwell is a terrific crosser. Whether it's from inside his own half, in the middle of the pitch, outside the box or around the byline, he shines. His acute vision allows him to deliver pinpoint balls with accuracy, speed and the perfect curve for the recipient to receive or run onto. He'll test any keeper with that stinging shot as well. 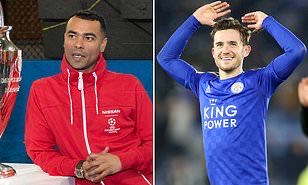 The Blues
TheBlues___
Follow
Ashley Cole on Chilwell: “I would love to see him at #Chelsea. He's doing really well. He's enjoying the way Brendan plays and his system; he's got that licence to attack. He's shown quality not just on the ball, but one-on-one he can defend and he likes to defend." #CFC https://t.co/9igXCUY0RW
Follow
22:51 PM - 12th Dec 19
228
1941

His ball-carrying abilities recall Gareth Bale, albeit without the blistering pace. Like the Welshman, the 22-year-old drives into central areas from the left, creating a numerical advantage in midfield. When hit on counters, he'll provide cover in the box as Leroy Sane discovered to his chagrin.

The England international likes to take on defenders and dribble past. Again, not in Bale's category, he nonetheless possesses deceptive acceleration. Last season, he made more sprints [749] than any Premier Leaguer. He averages more than two aerial duels won per match. Opponents can't rely on long diagonals to find their target. Standing at 5’8, he is dirty yet disciplined, booked only once this season.

On the other hand, Chilwell is predictable. He rarely takes risks. Not a bad trait to have, it nevertheless limits his impact. He is safe with passes, overprotective with the ball at his feet and chooses short passes over those of longer range. He's a bit shy about whipping crosses into the box, favouring perimeter interchanges with Wilfried Ndidi and even Caglar Soyuncu. Lucas Digne and Andrew Robertson are more assertive. Rodgers coaches a more balanced approach, however.

Chilwell’s consistency makes him a lucrative acquisition for any club. Chelsea lead the line for attaining his services. The transfer ban has been lifted off the Blues which means they can go out in the market in January and buy players. Chilwell fits the style Frank Lampard plays. And with Emerson and Marcos Alonso at Stamford Bridge, Chilwell would make the starting XI directly.

Then again, didn't I mention Chilwell rarely takes risks? Don't expect the young man to abandon the only team still in the title hunt with Liverpool to join a new setup under a new, less experienced manager. Whether Leicester challenge Liverpool this year or next, Ben Chilwell will be an integral part of Brendan Rodgers' plan.