Bury Football Club is gone; expelled from the Football League on Tuesday night.

The 'enormous regret’ felt by EFL Executive Chair Debbie Jevans, did little to quell the anger and sadness of the club's supporters.

Andy Holt, owner of Accrington Stanley and crusader for regulatory reform in football, described the process as 'like watching a slow-motion train wreck.’

On social media, thousands of football fans tweeted their condolences, their sorrow at what had unfolded, their shock that nobody stepped in to stop it happening.

They had hoped there would be a resolution, even after the prospective buyers pulled out, they couldn’t imagine that the authorities would allow this club, with 134 years of history, to die.

Their accumulated debts, not much more than the weekly wage bill of a Premier League club, were insurmountable. If the poor are left to rot they will eventually die of a common cold.

These clubs have been run into the ground by negligent owners.  The fit and proper persons test is not working correctly. Stewart Day, Steve Dale and Ken Anderson - the maligned owners responsible for the situations at Bury and Bolton, are men who, had due diligence been carried out, would never have come close to owning a club.

If the EFL cared, even a little bit, we wouldn’t find ourselves in a situation whereby one club has died and another, after teetering on the brink of oblivion, was finally bought after negotiations which last months.

Football is broken, in the years to come we will see other clubs flirting with bankruptcy; victims of the fact that they are members of an organisation that is, at best, indifferent to them.

Examples of the EFL’s self-indulgence, negligence and ineptitude are there for all to see.

Shaun Harvey, erstwhile head of the EFL, oversaw arguably the most appalling eras of its history yet somehow contrived to have his salary increased year-on-year.  But it isn’t just bad ownership and negligent governance that is causing clubs to flounder in the putrid waters of administration. 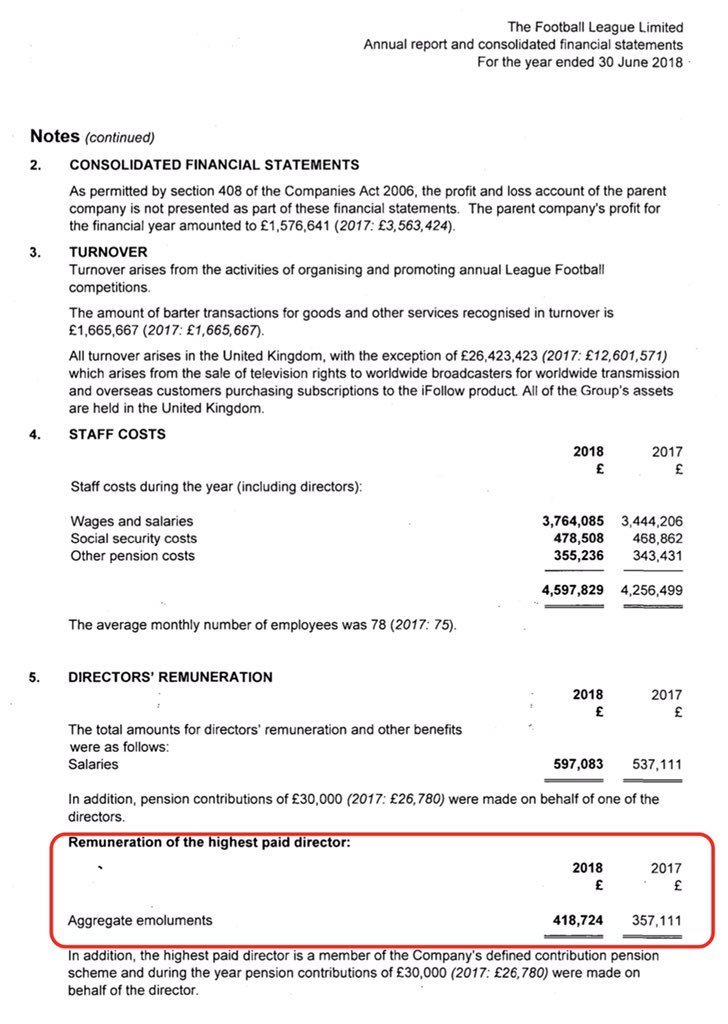 Martin Calladine
uglygame
Follow
Your reminder that the EFL made Shaun Harvey a millionaire while he ran league football into the ground.

The distribution of footballing wealth is skewed depressingly in the favour of the super-rich and while Premier League clubs do pay solidarity payments, evidently it's not enough.

The most recent TV deal signed by the English top-flight is worth £5billion over three years.  The EFL's, which stretches over five years, is worth £4.4billion less and is distributed between 72 clubs.

Yet to many, the suggestion Premier League clubs should use some of the contents of their obscenely fat wallets to help the clubs who toil in their shadows seems far-fetched and idealistic...

During the conversation about Bury and Bolton Wanderers, many fans have asked why bigger clubs aren’t doing more.

On Twitter recently, one of this platform’s other writers suggested to me that such displays of charity would set a dangerous precedent.

His worry is that if one of the big clubs decides to bail out a minnow it would lead to an epidemic of smaller clubs resting on their laurels, safe in the knowledge that, should they find themselves in financial difficulty, they will be saved by the philanthropy of a generous giant.

Maybe he is right, but surely that is better than clubs ceasing to exist, communities being destroyed and hearts being broken.

The fact is that if wealth in football was more evenly distributed we wouldn’t be having this conversation.  Idealists like me wouldn’t have our naivety criticised our sense of altruism mocked.

The Premier League is often referred to as the Promised Land but the gap between its pearly gates and the Football League is widening with each passing season. Clubs desperately try to keep up, they chance their arm for a shot at glory. Unlike TV money, this yearning trickles down until clubs are forced to operate beyond their means just to survive.

The integrity of the Football League is stretched thin and the end result of this farce is what happened at Bury and Bolton.

The Premier League and its members are just as responsible, their actions just as condemnable as those of Day, Dale, Anderson and the EFL. The profligacy and greed of this country's elite clubs is destroying the football pyramid from their foundations.

More money is needed in the lower leagues if that level of football, which brings joy to so many, is to sustain. It may already be too late.

To ask big teams to dip into their pockets to help the likes of Bury and Bolton may be unrealistic but it may be the best chance these clubs have.

Those who support Football League clubs are forced to watch as the likes of Manchester United and City spend millions on mediocre centre-halves, throw ridiculous sums of money at bit-part players and line the pockets of unscrupulous agents.

This summer United spent £80million pounds on a single player, the total debt which sealed Bury’s fate is a fraction of that...

talkSPORT
talkSPORT
Follow
“I'll be broken-hearted for the rest of my life over this.”

“I can't believe that the club has gone.”

“Football is done for me. You can't support another club.”

Bury is nine miles from Manchester, a city with two gigantic football clubs.  They needed all the help they can get to stay afloat and if that means City and United dipping into their pockets and chucking a quid into the Shaker's grubby polystyrene cup then so be it.

The club ceasing to operate means that the town will lose £3million per year, that’s according to Dave Gifford, the leader of Forever Bury, the club’s supporters trust. One pub close to the ground has already made a pre-emptive move to close its doors.

Hundreds will lose their jobs and not just those directly employed by the club itself.  This is what is at stake, the lives of thousands, instantly made significantly more difficult.

Of course, it isn’t an ideal scenario for these clubs to go knocking on their neighbours’ doors cap in hand, but what other alternative do they have when the very organisation they are a part of refuses to help?

Premier League clubs, these bloated companies with more money than sense, have a duty to do their bit.

‘Oooh it would set a dangerous precedent.’

Balls to your dangerous precedent.  What is more dangerous a precedent than allowing clubs with over a century of history to die?

We need to stop talking about this as a nonviable option, a naive but unrealistic hope.  The money is there and there are clubs who need it.

There are hundreds of ways it could be enforced and it is the job of those in charge of football to recognise their abject failures and the fact that we are beyond crisis point; it is time for the EFL to claw back some of the Premier League’s billions and help failing football clubs.

But this won’t happen. For years football fans have called for the EFL to reform, to do their job and they have refused and failed time and time again.

We are at the stage where charity from bigger clubs is the only viable recourse.

For those who say that it isn’t a big club’s job to save a small one I say you are wrong.  If you are able to help then you should.  As kids, we are taught to always do the right thing but sadly that seems to have been forgotten in football...