Blood and Thunder in Sydney as Streak Comes to an End

By Warren Smith
A League Hyundai A League Rest Of The World Slider Articles Sydney Fc Western Sydney Wanderers Wsw
Nobody had got the better of Sydney FC for nineteen domestic league games, although that tremendous run has come to an abrupt end at the hands of their closest rivals – Western Sydney Wanderers; in what resulted in a real cauldron of mixed emotions.

Western Sydney had no real right to even dream of beating Sydney FC. They had met twice before in the season – and had failed to score a goal. One of those meetings was their 4-0 loss at home; which ground them into the lower levels of the A-League table. Their form has been very inconsistent too, with two wins, two losses and one draw from their last five prior to the Sydney Derby. Even the optimistic Wanderers fan will have found it hard to fathom a triumph here.

As previously documented, the Sydney Derby is a hotly contested game – full of passion and conflict. The Western Sydney Wanderers have a real reason to besmirch their cross-town rivals. After all, the last Sydney derby that they won was back in 2014. It's been an agonising series for them, three years since they last won in this fixture.

Enter Brendan Santalab, the veteran forward who will go down in history as one of the few footballers to play for Sydney FC, Western Sydney and the semi-professional Sydney United. Despite being born in Wollongong, some 100 kilometres away from Sydney he's played a huge part towards the city's footballing prowess.

Santalab was responsible for the Wanderer's last derby win three years ago, and he again was the difference again in the most recent encounter. His goal sank Sydney FC in the twenty-sixth minute and was enough to end the Sky Blues nineteen game unbeaten streak; which previously looked untouchable.

The goal lit the touch-paper in the game; as it exploded into a real Sydney derby classic. Despite no further goals, several went close amid lots of controversies.  The first wave of controversy came when Ninković seemed to be forced to the ground by a pincer movement from two Western Sydney defenders. The action split seemingly everyone involved, the two managers differed, pundits and commentators couldn't collaboratively decide on whether a penalty should have been awarded. Graham Arnold, the Sydney FC manager, however, felt his opinion known to the world – that he felt a penalty should be given. That said, the only opinion that really matters is that of the ref, who did not see anything wrong with the defensive play.

For much of the second half, Sydney FC lived up to their position at the top of the table, asking some difficult questions at their opposition. Zullo, Bobô and Brosque got very far forward and had countless efforts – yet none of which managed to equalise. This eventually led to a fiery and foul-driven period of play where several players hit the deck.

Come the eightieth minute and the Wanderers fashioned a real chance, which Vukovic makes a stellar save to keep the game in the balance. The ball was then played down the field immediately; Bobô struck from close range – yet Janjetović made a “save of the season” style stop, denying the Sky Blues. He continually did this throughout the game, which made Fox Sports hail him a Western Sydney hero. There was a definite irony in this, as he used to be the Sydney FC's number one, having made one-hundred appearances for them before switching to the red-and-blacks at the end of last year. The aforementioned move hasn't helped his popularity; with the FC fans labelled him a snake – and even propelling toys at him. No love lost at all. 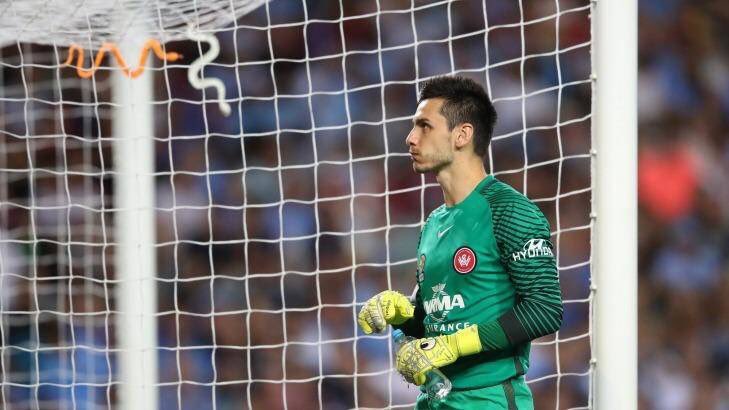 JANJETOVIC: Yep, that's me. You're probably wondering how I got myself into this ... or this.... https://t.co/8OBMVXlcDc
Follow
00:55 AM - 2nd Feb 17
0
1
Deep into added time, the second controversy struck. Brosque had stormed into the box and was brought down by a dubious Cornthwaite tackle. Roars for a spot-kick rang around from the Sky Blue players and supporters, yet the referee was again unmoved. Nothing awarded, the game shortly ended. The streak had ended.

Brendan Santalab had tears of joy in his eyes during the post-match interview given how much it meant to him. Western Sydney had ended a traumatic three-year wait for a derby day victory. Santalab was ironically the only goal scorer in their last win over the Sky Blues. The grandeur of the occasion and achievement altogether was too much for the veteran forward. The win sees Western Sydney make into the all-important top six places which go into the Final Series to determine the overall winner.

Alex Brosque who's been enjoying a renaissance this season was ushered to the microphone to represent Sydney FC after the match. He delivered a very sombre and down to earth statement: “we've only lost one game all season”, which is actually very true. The game will be a bigger win for home side than a loss for the visitors. The loss will be extrapolated into something that it isn't by the media. Sure it's very bitter to lose to your rivals, but given your still eight points clear at the top – but in the grand scheme of the season; they are still the best team.

Going forward, Western Sydney Wanderers must try to sustain this league form as well as balance the AFC Champions League form. Sydney FC will have to bounce back and do what they did for the first nineteen games.