It’s easy to forget that when Blackburn Rovers won the Premier League in 1995, the campaign is one of the most impressive in English football history. The Lancashire club rose from a precarious existence in the second tier to Premier League champions, under the stewardship of wealthy local benefactor Jack Walker and legendary manager Kenny Dalglish in a tale that shocked the footballing world.

John Duerden’s new book Rovers Revolution, Blackburn’s Rise From Nowhere to Premier League Champions captures the magic of the story perfectly. The early part of the book lays out the background for the club and its tale. This opening section is well-written. It is not simply a dry account of Rovers’ on-field exploits, but a beginner’s guide to club and town. It describes Rovers’ place in a traditional, economically challenged community in the heart of Northern England. Duerden takes the reader on a guided tour of cobbled streets and terraced houses, explaining the full context of Blackburn’s rise to the top. It is perhaps best summed up the incredulity of locals discussing the club’s big-money takeovers while sat in the local boozer.

“Surely no one with that sort of money would be interested in coming here? This is Blackburn, not Barcelona!”

Then the increasing hysteria as Kenny Dalglish arrives, bringing with him a slew of big names to Ewood Park. Then the play-off final win, strangely enough over future Premier League dark horses Leicester City.

In many ways, Blackburn’s league win was more impressive than Leicester’s. True, both clubs had money men behind the scenes and both ultimately triumphed thanks to shrewd management of a well-picked squad. But Leicester had a history of competing in the Premier League, a state-of-the-art stadium and a dedicated training ground. Blackburn on the other hand, had none of that and were, in many ways, languishing not only in the lower divisions, but decades behind the top clubs. Training on the local park, playing in a ground where, for big games, half the crowd would be standing outside club property, taking in the game from “freebie hill”. 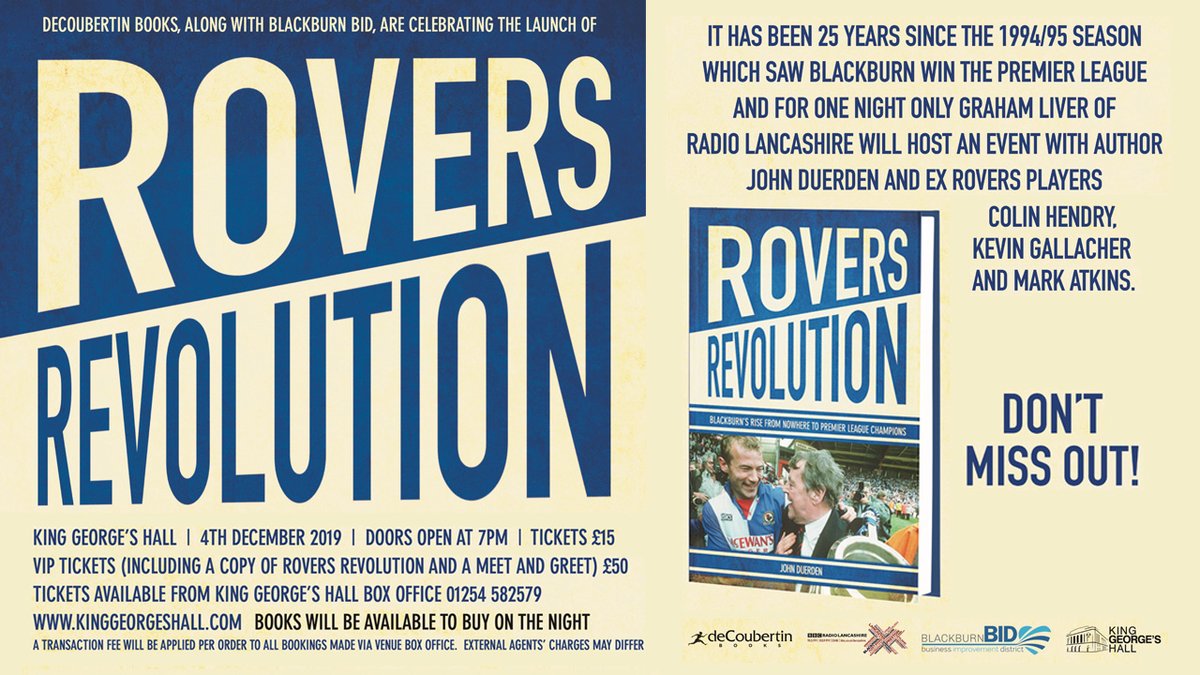 👑 John Duerden looks back on our historic journey to becoming Premier League Champions in 1995!

Duerden captures this contrast perfectly. From the years stuck in the lower leagues to the sudden rise to the top. The story is told not just by the author, but by a host of people who lived through it. Players and club staff, fans and locals. While this is a story with some major stars, it adds a layer of authenticity when partially told by the likes of former club secretary John Haworth and even the author’s father on occasion.

The narrative is peppered with contemporary media reports, allowing the reader further understanding on the context of events around the club. We hear the thoughts of new signings on their arrivals and club staff on important results. All this is mixed in nicely with the author’s own recollections and observations.

Aside from a great story, Blackburn’s tale presents an interesting philosophical debate that strikes at the heart of football even today, when the dust from the Ewood Park club’s rampage at the top has long settled. Is it right for clubs with big-money backers to have success purely based on an investor’s attention?

The problem is discussed in the final chapter of the book (no spoilers!). Was Walker’s investment of the club a harbinger of unchecked commercialism, an opening of Pandora’s Box that turned football into a billionaires’ playground? Rovers Revolution offers a sober, well-reasoned discussion of the subject to round things off.

Overall, this is a fine read for Blackburn Rovers fans, as well as anyone interested in English football, or even just an underdog story. A rollercoaster tale of triumph and tragedy, there’s something here for everyone.