By Danny Glendenning
Amy Lawrence Arsenal Book Review British Football Opinion Premier League Reviews Stuart Macfarlane The Wenger Revolution
Arsene Wenger recently celebrated 20 years as manager of Arsenal. Wenger's journey with the club has seen some incredible moments, along with some painful defeats, and it's all retold in this compelling book: The Wenger Revolution: Twenty years of Arsenal.

Author : written by Amy Lawrence and photography by Stuart MacFarlane

Price: £13.60,  available from all good bookshops and online at Amazon
The Wenger Revolution is a fitting title for the book, as during the past two decades, Arsene Wenger's not only revolutionised Arsenal, but he's also played a huge role in the revolution of English football. The front cover of the book depicts Wenger, with hands on hips, deep in concentration while his side are playing at the Emirates. It's a brilliant picture, one that catches the moment superbly, and it invites readers into Wenger's world.

This book recounts Wenger's time at Arsenal, the club's journey from the past to the present, describing the moments of euphoria and the times of distress. So it goes without saying, The Wenger Revolution is guaranteed to appeal to Gunners supporters, but it will equally appeal to fans of the Premier League, and to all other football enthusiasts. The front cover also states Wenger wrote the foreword, which increases the appeal of this book, as who doesn't want to hear from the great man himself?

There are two components that help make The Wenger Revolution an interesting book to read: the words and the photographs. Amy Lawrence provides the words: the Guardian and Observer football writer has had two books previously published, both about her favourite club Arsenal: ‘Arsenal, proud to say that name', and ‘Invincible.' While Stuart MacFarlane is responsible for the eye-catching photography: he has been the official photographer at Arsenal since 2001, so he has exclusive access to the first team squad. Combining both of their talents, they've succeeded in producing a unique book.

The Wenger Revolution consists of 11 chapters, with each one focusing on a different theme or period of time at Arsenal under Wenger. The reader receives insights into key developments at the club; including, Wenger's arrival in north London, the club's training ground upgrade, the move from Highbury to the Emirates, and Arsenal's growth around the footballing world. Other achievements also have a chapter dedicated: Wenger's early success, the undefeated campaign, and Arsenal's two recent FA Cup triumphs. Throughout the book, Wenger also gives his opinions regarding certain players, and his own feelings at crucial times in the club's history.
Not many managers will leave a long-lasting impression on the Premier League as what Wenger undoubtedly will. During his time at Arsenal, Wenger has done just as the title of this book suggests, and produced a football revolution. With the Frenchman at the helm, Arsenal have won three Premier League titles - including the invincible campaign in 2003-04, six FA Cups, six Community Shields, and the club also reached the Champions League final in 2006. In this book, Wenger admits the Champions League final defeat to Barcelona is his biggest regret.

Wenger's vision for Arsenal was in place when he arrived at the club on 22nd September 1996. Since that time, Arsenal have been on a remarkable journey, and the club has achieved great things; feats that would have been unimaginable before Wenger arrived, both on and off the pitch. Arsenal's success over the past 20 years includes claiming major domestic trophies, building a new state of the art stadium, developing young talents into world-class stars, playing an attractive style of football, and growing the club's reputation worldwide. Much of this would have been impossible without the ambition and determination of one man: Arsene Wenger.

The Wenger Revolution achieved what it set out to do, so I would definitely recommend reading it. The book tells the fascinating story of Wenger during his managerial career with Arsenal, primarily, by using mesmerising images, but it's also accompanied by anecdotes from Wenger, along with stats for every player who's played for Arsenal in the last 20 years. While the writing that introduces each chapter is descriptive and well thought out, there isn't all that much text throughout the book. However, as the age-old adage goes: a picture is worth a thousand words. That's certainly the case for The Wenger Revolution.

We have one copy of the book to giveaway to a lucky fan, to enter just follow us on Twitter and retweet the following: 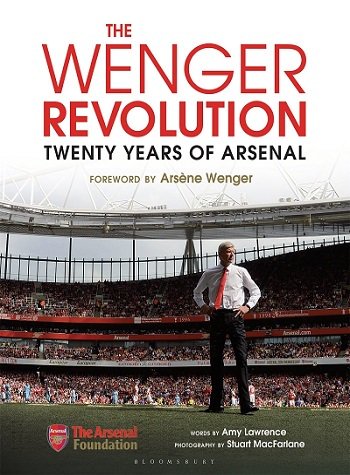 ItsRoundAndItsWhite
RoundAndWhite
Follow
Want to get hold of a copy of "The Wenger Revolution"?
Just follow us and RT, the winner will be notified by DM on Friday #AFC https://t.co/4fFtYofH1F
Follow
13:47 PM - 24th Oct 16
105
29