Book Review: Why are we always on last?

Every single weekend during the domestic football season, we all tend to find ourselves sat perched in front of the television with one eye open (after sinking a few cans) patiently waiting for Match of the Day to begin. You hear the iconic music, the excitement starts to build as you prepare to relive your team's latest victory. Then you remember it was a boring 1-0 win courtesy of a deflected goal. You take a glance at the running order and find your team dead-last. 'Ah I'll just catch up in the morning'. We've all been there, right...?

Well, what better way to discover what goes on behind the scenes than the vital cog in the MOTD wheel? Paul Armstrong had the dream job of editing the BBC's flagship football programme for fifteen years, working on seven World Cups in the process. His great stories about what goes on behind the scenes will have you laughing, smirking in agreement and remembering that once upon a time, there was actually a three-year period when ITV somehow won the rights to show Premier League highlights, 'The Premiership' doesn't really have a ring to it - and don't even get me started on the music. I was never a U2 fan.

What immediately hits home about this book is that it was written with love and care. Armstrong is your typical football fan like you and me. From travelling to games in his spare time to working at the 2010 South Africa World Cup while vuvuzelas went off in the background, this man just loves what he does and it shows. 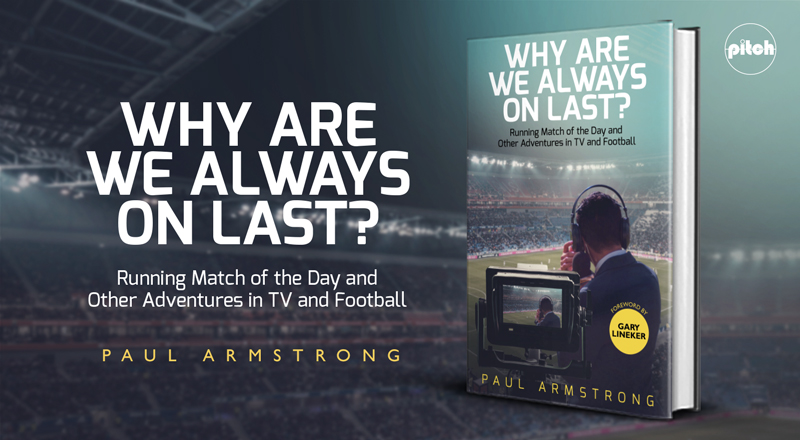 Why Are We Always On Last? : Running Match of the Day and Other Adventures in TV and Football
Shar.es
Read More

Graham Denton
gtdenton
Follow
Why Are We Always On Last? https://t.co/qPT4zL9KvE This looks like another cracker due out from @PitchPublishing next year. A fly-on-the wall account of Paul Armstrong's 30-year career working for @BBCSport, including 15 years as editor of #MatchoftheDay.
Follow
07:22 AM - 22nd Dec 18
1
4

Without wanting to spoil any of the great tales Armstrong tells so eloquently, his travels to every corner of the globe seem like every man's fantasy. Who wouldn't want to head to Japan, Finland or even Korea to follow the beautiful game? From reading this book, I now realise that editing MOTD isn't to be taken lightly. It probably comes with as much drama as Sergio Aguero's 94th-minute winner back in 2012.

While we're on the subject of stress and disappointment (for some anyway), it feels like the perfect segway to discuss Armstrong's beloved Middlesbrough, with the author himself claiming that his five decades following The Boro have been 'infused with pessimism and jaundice'. Sounds appealing, right? For what it's worth, Jonathan Woodgate's squad is shaping up pretty nicely for next season, in my opinion.

This is genuinely amongst the best sporting books I've read recently. If you've any sort of interest in the goings-on behind the scenes at the BBC, while listening to some great stories about Alan Hansen, learning what flavour Kit-Kat John Motson enjoys and following Armstrong's adventures, this is definitely a book you'll adore.

I can now promise you from this point forward, I'll always feel a little bit sorry for the MOTD editor whose job it is to pick the running order. Although we're two months away from the return of that theme tune that sends shivers down the spine, I can already hear my dad getting ready to moan about his beloved United being on last as they draw 0-0 at home to Crystal Palace.

Thanks, Paul, and if you decide to dip your toes into the water again and write another book, you've got a long-term supporter in me!