We want Wenger out!

The chant emanated from the visiting section at the AmEx Stadium on Sunday afternoon. Chris Hughton's Brighton had outclassed Arsene Wenger's Arsenal in the first half. From Pascal Gross' cross, Shane Duffy headed across the face of goal for Lewis Dunk to head home in the seventh minute. Brighton didn't stop creating chance after chance. The Seagulls insured their lead in the 26th minute. Glenn Murray headed home from another Gross cross. Pierre-Emerick Aubameyang pulled one back, following an excellent pass from Granit Xhaka. But, it was only a consolation goal for the Gabonese.

Here are three points of interest from the game.

Worse to Worst for Arsenal

Arsenal have lost four games in a row for the first time since 2002. Forty-five points after 29 matches is the Gunners worst haul since the 1994-95 season when they were in 12th. It is therefore also the worst under Arsene Wenger. Moreover, Brighton had not beaten the Londoners since 1982. To add to their misery, the Gunners' haven't won away in 2018, bar the game against Osterunds. Petr Cech has now come away from 11 games without his 200th Premier League clean sheet.

After the match, he could only blame himself and did. The veteran keeper made errors that led to both goals. Arsenal were a shambles defensively, had little control in midfield and were timid in attack. Poor man marking during set pieces and open play also gifted Brighton their opportunities. Wenger's fullbacks were to easy to pass. Granit Xhaka and Jack Wilshere didn't provide much defensive cover, hardly shocking considering neither is a defensive midfielder. Star players Mesut Ozil and Henrikh Mkhitaryan simply didn't create enough clear-cut chances. Record signing Aubameyang didn't look in rhythm. The manager, Arsene Wenger, couldn't be more disinterested.

Arsenal, being Arsenal, just didn't turn up in the first half. A newly promoted Brighton side ran circles around them. The second half performance was a little better but not nearly enough.

The Seagull is rising

Brighton have won three consecutive home games in the first division for the first time since 1982, a run that included their last win against Arsenal. Chris Hughton's men are now unbeaten in seven outings. They've scored 15 goals in that run. Jose Izquierdo and Anthony Knockaert spurred the attack with their running up and down the flanks, counter-attacking with pace, and getting the better of Calum Chambers and Sead Kolasinac respectively. Dale Stephens and Davy Propper bossed the midfield, allowing the ever-creative Pascal Gross to do his thing. Shane Duffy and Lewis Dunk bullied Arsenal. Ask Cech and Auba, The defensive duo combined to open the scoring for the home side and were rock solid at the back.

The Seagulls were organised, managed the game well, and were clinical when the chances came. Hughton's squad played with a sense of maturity and belief. Precisely the qualities Arsenal are missing. Brighton had a plan and executed it, putting in a tireless shift. The only player who didn't work his socks off for the team was keeper Mat Ryan, who denied the opportunity.

Even though Arsenal stepped up in the second half, Brighton did too. They defended deep, charged out when necessary, not switching off for a moment. They tracked runners and kept winning duels in midfield. It was a deserved win.

Brighton are now tenth on 34 points, seven clear the relegation places pending Crystal Palace's result against Manchester United today. Looks like the Seagulls will be flying Premier League skies in 2018/19.

Gross and Murray lead the charge

Pascal Gross is the bargain of the season. Bought for a mere £3 million, Gross has been in top form, registering 2.3 key passes per game alongside five goals and eight assists. The German has directly contributed to one less than half Brighton's goals and orchestrates their attack. Against Arsenal, he was creative as ever. His crosses were whipped in to perfection; his runs were precise; he created five chances. His assist to Glenn Murray was a fantastic cross, perfectly weighted, straight to the Englishman's head. Gross came near to scoring himself, but Petr Cech produced an excellent save. Defensively, Gross tracked back and pressed as needed.

Glenn Murray is in the form of his life, scoring his 11th league goal of the season. Eight have come since the turn of the year. The Englishman was the focal point of Brighton's attack. His large forehead acted like a neon sign attracting the ball. Every cross, every long pass seemed to find it. His hold up play, decision making, and aerial prowess were all brilliant apart from a bizarre moment in the second half when he completely wasted a counter-attack. With added competition from Leonardo Ulloa and Tomar Hemed, Murray has fought for and won his place. The 34-year-old is not ready to stop being Brighton's first-choice striker. If he keeps up with this form, Gareth Southgate may have to give him a call. 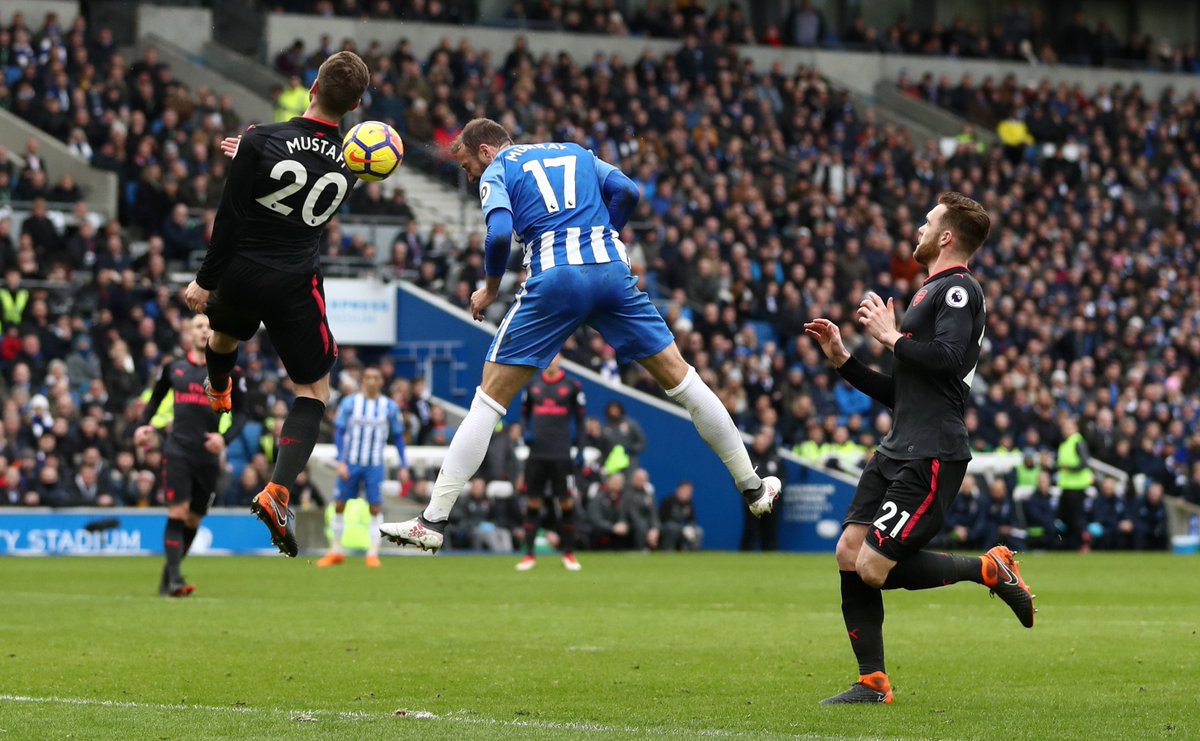