It was more difficult than expected, perhaps a legacy of that midweek cup tie. An early goal from Aubameyang was enough to secure the three points for Dortmund. Both sides wasted good chances to score and the game petered out somewhat after the hour mark. 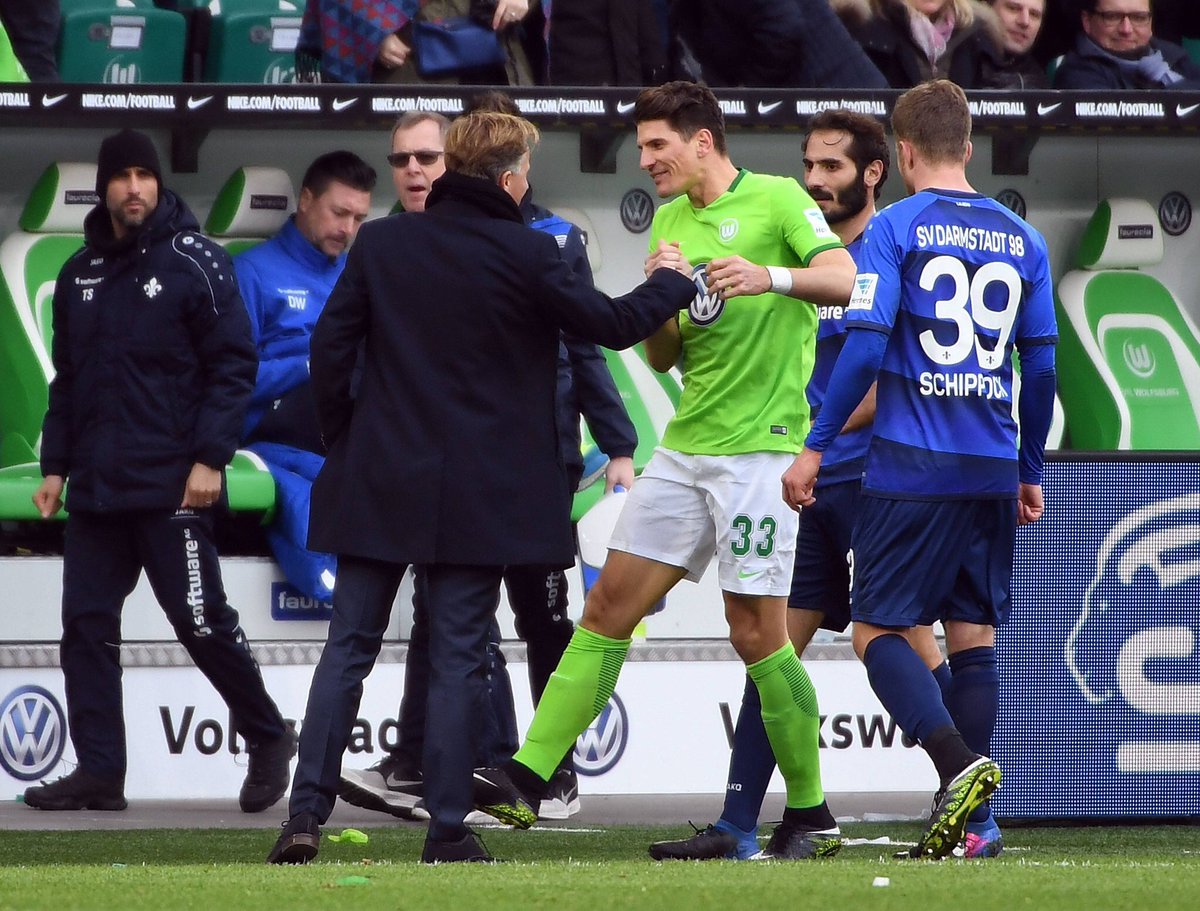 VfL Wolfsburg EN
VfLWolfsburg_EN
Follow
#mondaymotivation https://t.co/XebMglzh8d
Follow
11:33 AM - 20th Mar 17
3
24
Wolfsburg win, Gomez scores. Crisis, what crisis? It should have been an utter hammering in truth, Gomez was guilty of missing chances as were Ntep, Bazoer and Malli.

10 points gap now to the automatic relegation places for the Wolves and the challenge is now to rise as high as possible. For Darmstadt it is 12 points to Hamburg and relegation could be confirmed as early as Easter at this rate.

What a game and what a performance for Anthony Modeste. A sublime hat-trick, the first 2 giving Köln a 3:0 lead after Osaka's pretty special opener and all before half time!

Ibisevic was able to pull one back shortly after half time with a penalty before Modeste completed his hat-trick just after the hour.

At 4.1 up it seemed comfortable but then back came Hertha who utterly dominated the final 30 minutes. John Brooks pulled another goal back before Timo Horn probably saved all three points with a fantastic stop from Ibisevic in the 82nd minute. There was still time for another save from Horn from Brooks late on, the keeper making up for his howler last week.

“Attritional 1-1 draw. Both sides to be delighted with the point.”

Fair to say I called this one! A goal apiece before half time, Freiburg from the penalty spot after Augsburg keeper Marwin Hitz was lucky to stay on the field. Max Philipp has been impressive this year and he was felled for the penalty, dispatched by Niederlechner. Stafylidis equalized with a header and a chaotic game low on quality ultimately got the result it deserved. 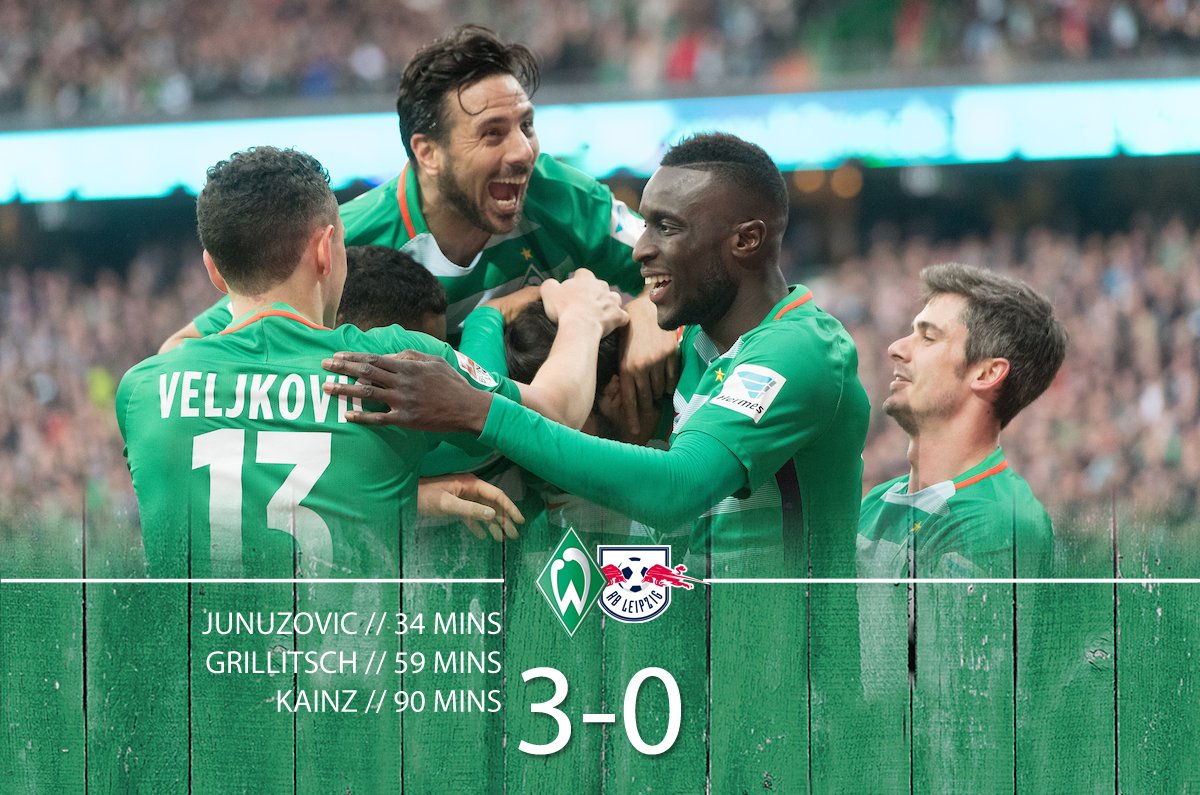 SV Werder Bremen EN
werderbremen_en
Follow
WHAT A RESULT! https://t.co/APHAtZv8pL
Follow
16:26 PM - 18th Mar 17
58
110
It might be time to start calling this a crisis for RB Leipzig after all. Werder rode their luck early on and then used their chances with typical German efficiency.

Leipzig did start well, Wiedwald once again made a crucial save from Werner and Forsberg should have done better shortly afterwards. 34 minutes had gone before Werder's first chance but BAM! Junuzovic absolutely rocketed one home from fully 25 yards. The 2nd chance came on the hour mark and once again it was taken, Florian Grillitsch netted after a lovely cross from Junuzovic. The third was a classic counter with time running out, Johannsson's shot saved by Gulacsi and Kainz followed up for his first Bundesliga goal.

I thought this had game of the weekend potential but it was only really noteworthy for another thoroughly professional Hoffenheim win. Sandro Wagner finally broke his long goalless streak with the 62nd minute winner. The result should have been much more comfortable, Szalai and Wagner both had chances before the winner came.

Leverkusen are sleepwalking to the end of the season but they need a win or 2 otherwise they might even end up in the relegation play off!

I didn't think anything could top the lack of quality on show at Augsburg-Freiburg but this one was a real snooze inducer on Saturday evening.

Hamburg came to get the point and went home happy, one Gregoritsch free kick was their only effort of note in the whole game. Frankfurt were reduced to half chances but a point at least snapped their losing streak.

As I said in the preview trying to pick a Mainz game is really difficult. As it turns out I picked the wrong 50/50 choice. Mainz were not awful, Latza had 2 good chances before Kolasinic slotted home what would prove to be the winner early in the 2nd half. A brilliant week for Schalke and they are now only 3 points behind Frankfurt in 7th! 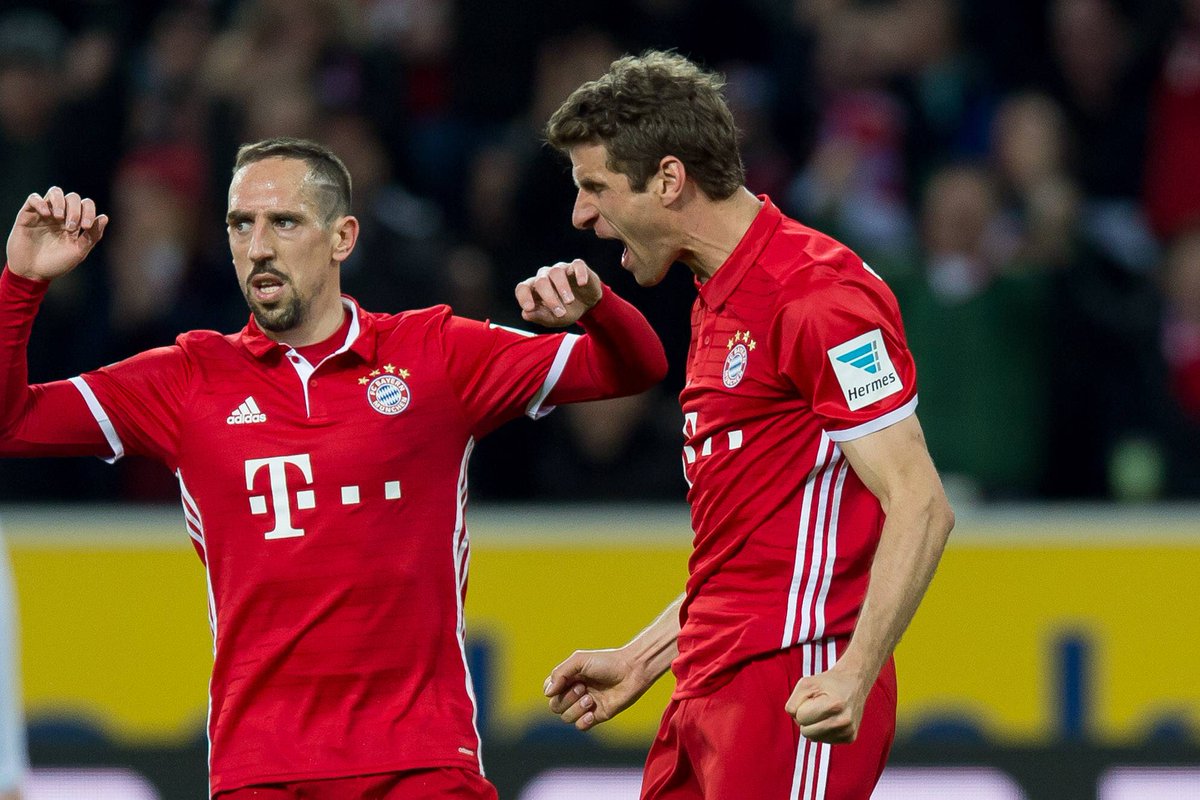 FC Bayern English
FCBayernEN
Follow
That winning feeling 💪@FranckRibery @esmuellert_ #BMGFCB 0-1 https://t.co/9ufh4mnqK4
Follow
18:49 PM - 19th Mar 17
49
195
Thomas Müller finally scored in the Bundesliga again, his 93rd in what was his 250th game. The exertions of the last few weeks were apparent for Gladbach, Bayern never really found top gear and still dominated the game from start to finish. To sum up the gulf in class, Yann Sommer the BMG keeper had the 2nd most touches for his side with 50 while Manuel Neuer had to deal with one shot all game.