Who doesn’t love a brand new football club funded by a mega-rich energy drink corporation? Most people as it turns out.

There was a significant uproar when RB Leipzig formed in 2009. The furore only grew bigger as they progressed quickly through the German league system. DFB regulations forced them to brand as RasenBallsport Leipzig but everyone knew it was sugary drink purveyors Red Bull giving the side wings, financially and otherwise.

Immediately upon promotion to the Bundesliga in 2016, die Roten Bullen cemented their place among Germany's top clubs, threatening to wrest the title from Bayern Munich for much of the campaign. A football purist’s worst nightmare, they’re here to stay and improving all the time.

This year they embark on a new chapter under Julian Nagelsmann. A third-place finish and a DFB Pokal Final appearance in 2018/19 is something the 32-year-old can build upon. Life under the new gaffer has started well, with two wins from two in the league and the First Round of the cup already negotiated safely.

It took a moment for new boss Julian Nagelsmann to find his feet at [cough] Red Bull Arena. A narrow win over VFL Osnabruck in the Pokal, Cup for you monolinguists, was followed by a convincing thrashing of Bundesliga new boys Union Berlin on Matchday One. After downing Eintracht Frankfurt 2-1, Nagelsmann is off to a perfect start.

Barring a disappointing 2017/18 campaign, RBL always looked a threat to the top teams since arriving. Ralph Hasenhüttl did a great job and Ralf Rangnick too but signing Germany's most lauded young manager could take them that extra step.

Nagelsmann made his name at Hoffenheim where he became the youngest manager in Bundesliga, aged 28. The so-called ‘mini Mourinho’ guided Die Kraichgauer away from the relegation zone and into the Champions League within 18 months. Now he’s out to prove he can work miracles again by guiding this expensively-assembled Leipzig side to silverware. 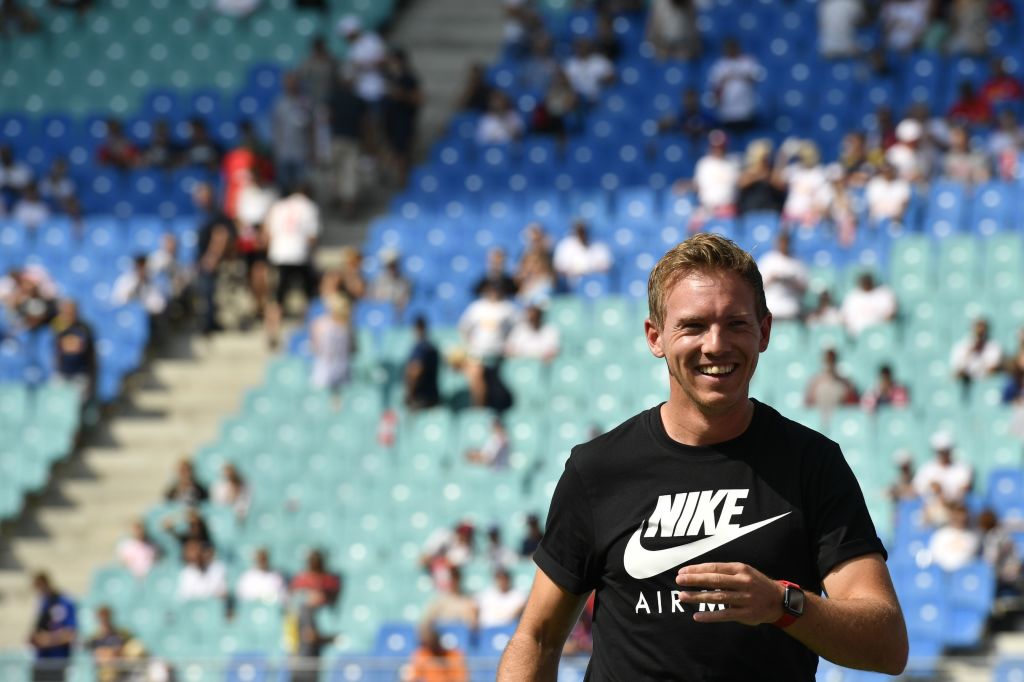 OptaFranz
OptaFranz
Follow
3 - Julian Nagelsmann is the first manager in the history of @RBLeipzig_EN who wins all of his first 3 matches in all competitions. Start. #rblsge https://t.co/PgP8D85vPt
Follow
16:57 PM - 25th Aug 19
13
69

Right now, there is probably no better manager for them but coaches alone cannot win anything. They need top players like Timo Werner. The die Mannschaft finisher appeared destined to leave on a free at season's end until he surprised the footballing world by signing a new deal to stay in Leipzig. Naturally, he celebrated it with a goal against Frankfurt.

Everything seems to be falling into place. One of the best managers around, their best player’s future secured and out of the gate like Usain Bolt, die Roten Bullen are playing with a style and swagger already.

More than that, the squad looks ready to seriously challenge on all fronts. The talent has always been there but their young players have looked a little raw at times. The absence of polish is probably what has held them back from challenging Bayern and Borussia Dortmund in the past.

Now, they have a good mix of youth and experience. Equally important is the desire to achieve which descends right from the top. Just as the players are out to prove themselves as footballers, chairman Oliver Mintzlaff wants to show the rest of the world that his side isn't just a marketing gimmick. This is a serious football club ready to challenge on domestic soil and in Europe.

It will take more than two games for many to truly consider them to be in with a shout. After all, relative minnows Freiburg have also won both their matches so far, as have three other teams.

But it’s the wider picture that looks so rosy for RBL. If they are still on par with the big two in a couple of months, more people will start to believe that Nagelsmann can break the Bundesliga duopoly for the first time in more than a decade.

The media has already branded the German top flight as another two-horse race between reigning champions Bayern and challengers Dortmund. Die Roten Bullen beg to differ.