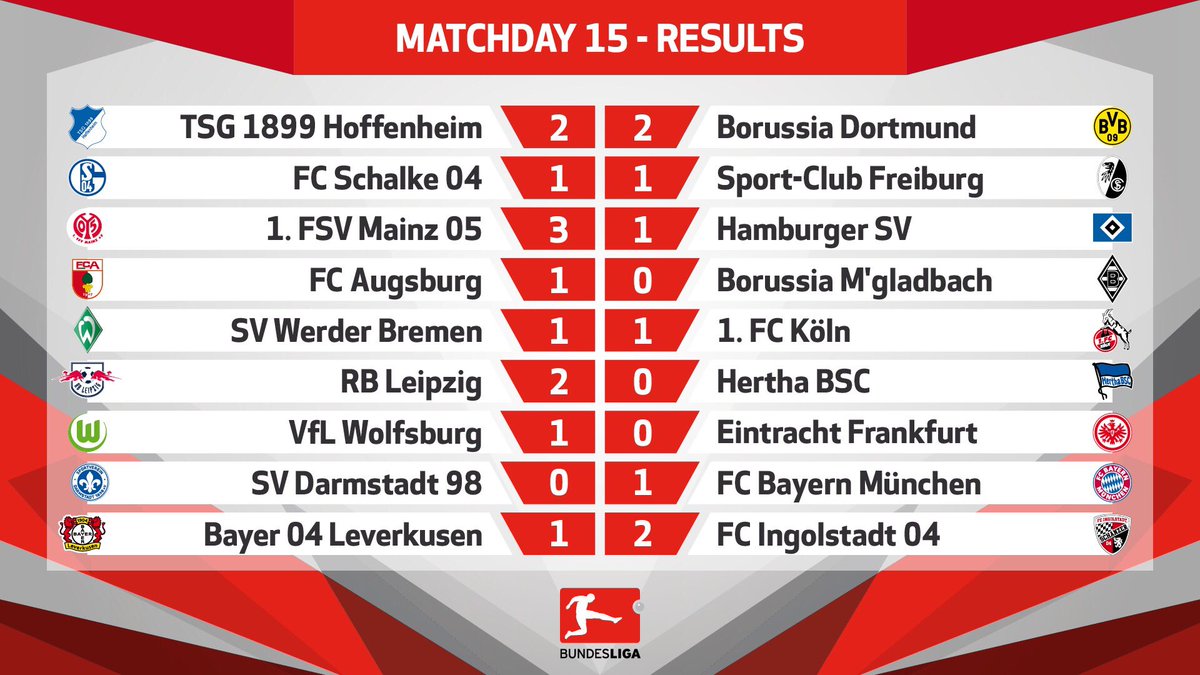 Well, Marco Reus certainly made an impact in this game, managing to get himself sent off in the first half for 2 yellow cards. A terrible start for Dortmund saw Mark Uth latch on to a ball and round Weidenfeller in just the 3rd minute. Mario Götze was able to pull one back after 11 minutes before Sandro Wagner nodded in from a corner after 20 minutes; to put the hosts back in front.

Reus can perhaps feel slightly aggrieved to have been sent off, both bookings were soft but in his absence, Ousmane Dembele turned in a sensational performance before also having his evening prematurely ended through injury. Aubameyang notched the equaliser just after half-time and Dortmund were able to hang on for the point.

A young Schalke side was held by dogged Freiburg. A frustrating point if there is such a thing for Markus Weinzerl's charges. Freiburg took the lead against the run of play mid-way through the second half, Niederlechner coolly rounded Fährmann before slotting in.

The impressive Konoplyanka equalised 10 minutes later, powering in a header from Baba Rahman's cross. Despite throwing everything forward in the closing stages Schalke was unable to break through again and Freiburg will be delighted to take another point home. 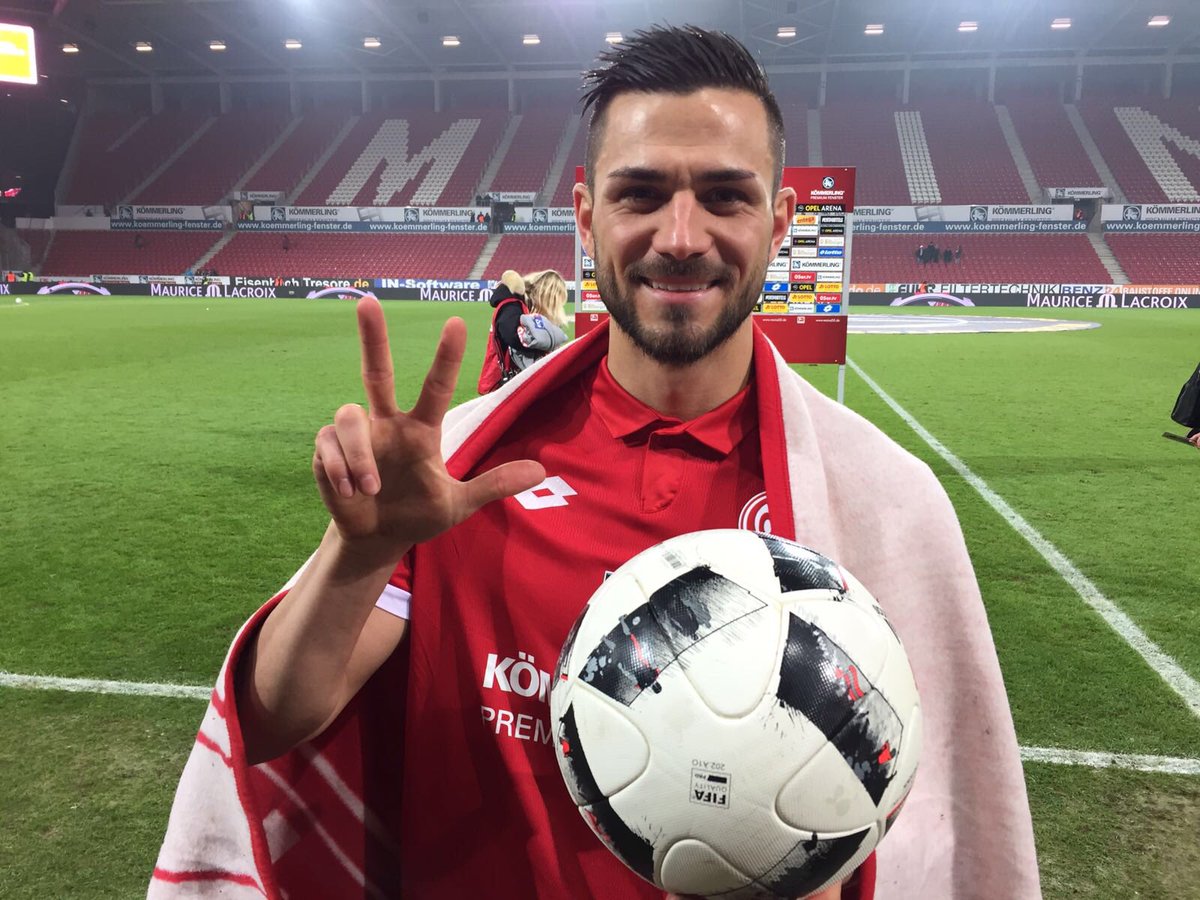 Hamburg, who were able to take the lead in the first half as Bobby Wood showed his quality to take down a pass and lash home in the 20th minute. Shortly after, Nicolai Müller should have doubled the lead but his effort from a rebound only found the bar.

As so often, Hamburg was duly punished, Latza made no mistake with his effort from Douglas Santos' poor clearance, to score his first Bundesliga goal.

There was more were to follow in the second half. Once again a rebound was lashed home just before the hour and then the best of the bunch secured the points minutes later. Mainz was able to celebrate their first win since MD 11, Hamburg fell to their first loss since MD 10.

Well, maybe the decision to replace Dirk Schuster wasn't so bad after all. Augsburg rise above BMG in the table with the win as well, so all in all a good week for them. For Andre Schubert, it will surely be curtains if he cannot fashion a win on Tuesday night against Wolfsburg, and even then it would still be a surprise to see him in charge in January.

A forgettable match saw no real clear chances until Martin Hinteregger rose highest to nod home from a corner 15 minutes from time.

A swerving effort from Serge Gnabry secured a point for Werder in an entertaining draw. Köln showed why they are flying so high early on, passing the ball nicely and Werder looked like they were chasing shadows. It was no surprise when Modeste managed to poke the ball past Drobny leaving Rudnevs with a tap-in just before the half hour.

That seemed to wake Werder up, though. First Gnabry belted home and they could well have taken the lead with Kessler saving from Gnabry and then Pizarro's follow up only finding the post.

Into the 2nd half, both sides had presentable opportunities but overall a point was a fair result.

Back on track for RB, who dominated from start to finish against a lacklustre Hertha. The only surprise was that there were not more goals, Timo Werner notched his 9th of the season just before half time before Orban added his 2nd of the campaign with a powerful header. Regulation about sums this one up, the only negative was Keita limping off for RB and they will be sweating regarding his fitness ahead of the trip to Munich.

Well perhaps I should apply to be chief motivator for Wolfsburg. I slammed them in the preview and they responded with a win, I like to think they stuck my preview up on the wall!

A much more aggressive display, especially in the 2nd half was rewarded with a headed goal from Bruma - Julian Draxler who was recalled supplied the assist from a corner. Mario Gomez also passed up 2 presentable chances.

Into the 2nd half and Frankfurt's talisman Alexander Meier ballooned a 65th minute penalty kick over the bar. Wolfsburg took heart from that miss and threw everything into defending their lead. Daniel Caliguri was particularly impressive, despite being a winger by trade he seemed to be everywhere.

A pleasant surprise. This was a hard fought game where Bayern were not able to roll over Darmstadt. Indeed it took a sensational effort from Douglas Costa to break the deadlock, hammering in midway through the 2nd half.

Darmstadt were game throughout but a serious lack of quality in the final third meant they never threatened to score. If Dirk Schuster does return he will have a sound defence to work with but reinforcements up front will be a serious priority.

Prediction – Away Win. Spot On

FC Ingolstadt 04_EN
Schanzer_EN
Follow
(90') FINAL-RESULT 1:2 #B04FCI
What a victory! Great performance against a @Bundesliga_EN top-team!!!
👊🏻WE ARE #SCHANZER 👊🏻
Follow
18:22 PM - 18th Dec 16
7
22
Well I was wrong about Maik Walpurgis and Ingolstadt. Leverkusen had Aranguiz sent off just after half time but Ingolstadt had been by far the better side in the first half and deservedly led at that point through Morales.

The sending off galvanized Leverkusen somewhat, despite Ingolstadt squandering 2 good chances the home side were able to pull level through Mehmedi after a great run and assist from Julian Brandt.

The visitors were not to be denied though, Cohen kept calm to secure all three points and lift Ingolstadt out of the drop zone for the first time since the opening weeks. It could have been worse for Leverkusen bar a series of good saves from Bernd Leno