Pep Guardiola is paying dearly for his decision not to replace Vincent Kompany in the summer. The Belgian's departure left a huge void in the Manchester City squad - that would have been difficult to fill anyway. Yet, signing even a semi-decent centre-back to replace the club legend would have been better than having none. But who could blame the Catalan-born gaffer for thinking he could make the best of the remaining bunch of players in the position?

Aymeric Laporte shone brightly last season. The Frenchman was easily amongst the best central defenders in the country and was ever-present in City's line-up particularly in important games. Who would have told Guardiola that injury will deny him his prized asset for the better part of this term? He definitely would have thought twice about baulking at Leicester City's asking price for Harry Maguire, that's for sure. The Englishman was available for the taking and would have gladly swapped the King Power Stadium for the Etihad. Yet he ended up in the red side of Manchester.

Guardiola's excuse was that the Cityzens didn't have the deep pockets to seal a deal, but that's unlikely to be the main reason why. Although the club is reluctant to splash the cash as a result of Financial Fair Play limitations, if the manager really felt there was a pressing need for such a player, he would have gotten him. Whatever needed to be done, including selling a squad member deemed surplus to requirements would probably have happened.

However, coming into the campaign with Laporte, John Stones and Nicolas Otamendi all healthy, the boss was convinced the trio will be enough. Unfortunately, injuries have wreaked havoc in the team leaving the side severely exposed at the back. The former Athletic Club man suffered a serious knee injury, damaging his cartilage and lateral meniscus. That occurred as early as August and has seen him sidelined since. He is expected to be back around February.

That left Stones and Otamendi standing in the position. But the former Everton man has suffered a few injuries of his own during the period. To make matters worse, Otamendi has been hopelessly out of form. The Argentine never quite convinced before Guardiola took charge. But the manager's coaching seemed to have brought out the best from him two seasons back. The former Valencia CF defender featured regularly back then, helping City on their way to the double. 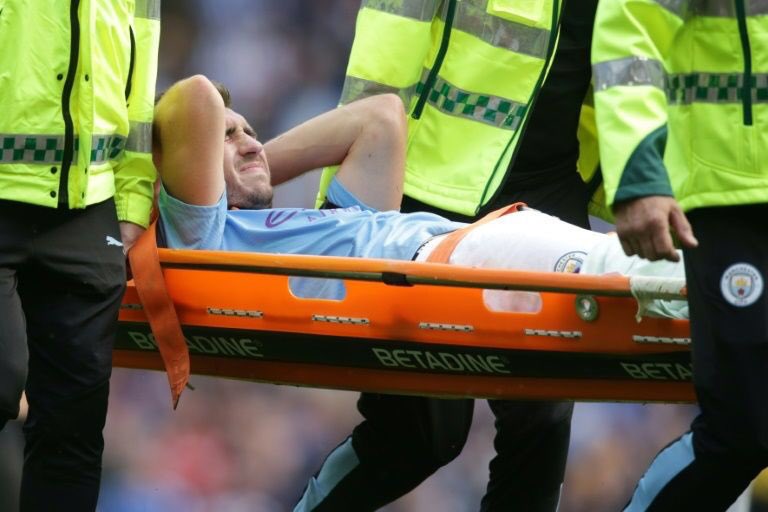 City Chief
City_Chief
Follow
📰| Manchester City could look to secure a short-term signing on loan to tide them over until the end of the season or until Aymeric Laporte returns to full fitness.

Otamendi simply wasn't quite the same last term as the manager turned to Kompany and Stones, alternating between them as partners to Laporte. The Argentine was displeased with his lack of game time and threatened to leave the club, with the Spanish side from where he came rumoured to be his likely destination. However, the manager's decision not to sign a new centre-back convinced him to stay.

So far, he has failed to live up to expectations. The gaffer now prefers to use midfielder Fernandinho in the position instead, as was seen most recently in the game against Liverpool. The result, as was also the case against Norwich City and Wolverhampton Wanderers gives the damning verdict.

The lack of a top centre-back that can fill the void left by both Kompany and Laporte has been the biggest problem City has faced this season. The sooner Guardiola realises that the better for him. Yes, Liverpool has been a beast this season with the sole aim of conquering the division, but City, on the other hand, has failed to maintain the high standards set in the last two campaigns. Falling nine points behind the league leaders so early in the season says it all.

Based on what has happened so far, it will not be surprising if the Sky Blues go on to lose many more matches than Liverpool throughout the remainder of the campaign. To have Leicester and Chelsea ahead of City in the table doesn't bode well for a side that was the title favourite for many before a ball was even kicked this term. Therefore, Guardiola must take drastic measures to get back in the title race. Liverpool appears to be running away with things already, but with just 12 matches played, there's still a possibility of the situation taking a different turn. A similar story unfolded last time out.

What must Guardiola and City do now?

A top centre-back is the need of the hour for the side. Signing one in the January transfer window will definitely make a difference in the team. A ready-made one like Nathan Ake from Bournemouth could come on board and fit in seamlessly. He will provide adequate cover for Laporte until the Frenchman returns and thereafter become his long-term partner in the position. That will stabilise the team to give Liverpool a fight. At this juncture, the league is Jurgen Klopp's to lose. Only Liverpool can screw Liverpool! If that happens, like seasons gone by, City will be on hand to take advantage.