Can AC Milan find their rhythm against Internazionale?

AC Milan 'host' this season's first Derby Della Madonnina at a time when Marco Giampaolo's men struggle for goals. Against a razor-sharp Internazionale, top of Serie A, the Rossoneri could get hurt. Milan managed just two strikes in their opening three matches. Krzysztof Piatek found the net once in his previous four matches for club and country. Inter, on the other hand, are on a superb run. Top of the log, they flaunt a 100% record with seven strikes. On top of that, the Nerazzurri are unbeaten in six league meetings against their neighbours. Can Piatek and co find their rhythm in the derby?

In the quest to end Juventus’ domestic hegemony, the Giuseppe Meazza/San Siro ushered in two managers last summer. Giampaolo and Antonio Conte took over Gennaro Gattuso and Luciano Spalletti's jobs. Despite disparate styles, both were considered upgrades over their predecessors. Unlike Gattuso, Giampaolo epitomises attractive football. Conte's glittering trophy-haul elevates him over the bald-pated Tuscan.

The ex-Chelsea boss is well on track to add to his collection by ending the Old Lady's eight-year reign, a dynastic spell that he began. The two Lombardy clubs would love to repay the Bianconeri's rude interruption. In the year before Conte put Juve back on the pedestal, Milan had won the Scudetto under Massimiliano Allegri and Inter the Coppa d'Italia under Leonardo.

Inter are the only Serie A team still boasting a perfect record. They've been ruthless in attack and conceded just once.

Meanwhile, Giampaolo's team conjured two victories albeit far from convincing. They began the season with a dismal 1-0 defeat away to Udinese, a performance so poor the manager admitted he considered scrapping the 4-3-1-2 formation. Successive wins followed on either side of the international break. Tightly contested affairs against newly promoted Brescia and Hellas Verona did little to ease fans' tensions, however.

Lack of offensive verve should be Giampaolo's biggest concern. The Rossoneri aren't creating enough. They're disjointed in midfield and attack. They only have the two goals. While Suso strives to blend into Giampaolo's system, Ante Rebic and Rafael Leao haven't found their footing either. 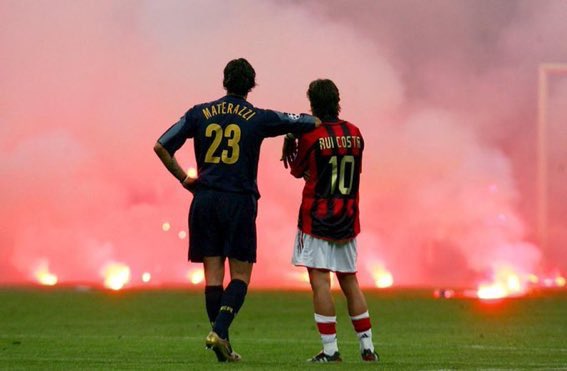 Worse, Krzysztof Piatek is far from his usual high standards. He lacks that cutting edge, squandering too many efforts. His sole strike against Verona was from the spot; he is yet to score from open play.

Inter isn't the kind of opposition to take pity. The back-three of Diego Godin, Milan Skriniar and Stefan de Vrij are frightful customers. Their sole intent is to frustrate the Pole into considering a career change.

Still, the Nerazzurri rearguards were exposed against Slavia Prague in the Champions League on Tuesday. Peter Olayinka Oladeji's trickery, pace and strength made the 33-year-old Godin look his age and the two 20-somethings naive. In Leao, Milan has a player in the same mould. Like Olayinka, the Portuguese youngster loves to get on the ball in threatening positions, stretch the backline and show bursts of pace at the right moments.

Giampaolo is a devotee of the game, studying potential weakness in foes. He must have seen the trio's vulnerability. Throwing Leao in the mix amounts to less attention on Piatek, providing the latter more freedom to wreak havoc. With assistance from Suso and Rebic from midfield, the Milanese could get it right.

The odds suggest otherwise, though. It's been seven frustrating contests since they took maximum points in a derby. When the building was called San Siro and filled with red-clad supporters, they managed three draws.

The club still hasn’t found an identity. Summer signings Ismael Bennacer, Leao and Rebic are yet to fully integrate fully. The doubts are theirs.

Inter, on the other hand, are already perfecting Conte’s approach with positive results. The Rossoneri may find their rhythm but Inter's momentum will be difficult to halt.