Can Barrow AFC beat the odds and win promotion back to the Football League?

With less than two months to go in the season, the National League is down to a two-horse race for the title with a place in the Football League at stake. The current surprise leaders are Barrow AFC. Can they continue their fairytale season and earn a place back in the league for the first time since 1972?

Since dropping out of the Football League, the Bluebirds have moved up and down on multiple occasions between the top two levels of non-league football. Most recently winning the National North in 2015. They've occupied a place in the National League since.

Manager Ian Evatt took over during the 2018/19 season and led them to a much-improved 10th placed finish. In the season prior, Barrow finished one point above the relegation zone. However, no one could have predicted their success this year. With Yeovil Town and Notts County the latest clubs to drop into the division from League Two, it was always going to be tough, but Barrow are running away with it. Ahead of Tuesday’s games, they are eight points clear of second-placed Harrogate Town having played one game more, but it's the Bluebirds' form that has made it so hard for anyone to catch them. A recent league defeat at Dover was their first in the division since October. They have won 21 of their 36 so far, while they remain the league's top scorers with 68 goals. They also hold the joint-best defensive record with 37 conceded. Simply put Barrow have been excellent throughout the campaign.

At this stage, the title race appears to be down to two, but Barrow has a clear advantage despite second-placed Harrogate having won seven of their last nine in the league. The Yorkshire side also have several tough fixtures to come with a two-legged FA Trophy semi-final against Notts County sandwiched in between meaning they will be playing twice a week for the majority of the final two months. Making up that five-point game isn't going to be easy.

The job for Evatt’s men is not quite done yet, though, with nine games remaining. Five are against those in the top ten with a potentially pivotal game away at Yeovil taking place on the penultimate weekend. 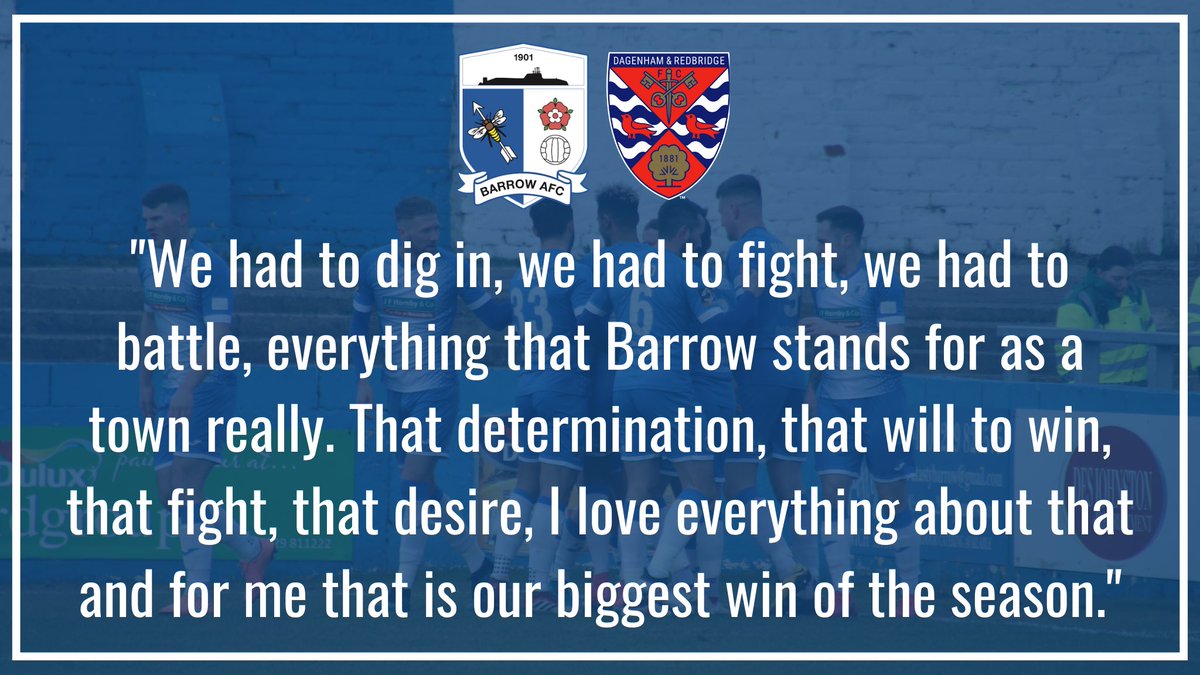 The Barrovian public turned out in force to #BackTheBluebirds again on Saturday and Ian Evatt believes his side repsresented exactly what the town is about in our win over Dagenham.

Those leading them to the title

For Barrow, two players have stood out this season. John Rooney took over as captain midway through the season and his fantastic form has continued. The younger brother of superstar Wayne has scored 17 goals in the league from midfield - making him the fourth top scorer in the division. It is his teammate Scott Quigley, though, who leads the way on 20 goals. Between them, the pair have over half of Barrow’s goals and if they can keep firing, promotion should be clinched...

Evatt’s own journey at Barrow has proved many doubters wrong. His only previous managerial role saw him have a very brief spell as caretaker manager at Chesterfield - where he was also a player at the end of the 2017/18 term. It was a surprise to many, then, when he was appointed gaffer at Holker Street.

With so many powerhouse, high-profile clubs the division, few would have given them a chance this year, but from the word go they have been excellent. The local community have got behind them fully, which also helps. Just two years ago, the then chairman made a plea for increased attendances if they wanted to challenge for promotion. This term, a brilliant average attendance of 1937 is certainly spurring the players on.

Very little genuine fairy tales exist in football in 2020, but Barrow AFC getting back into the Football League would be one. Evatt has done a fantastic job and there is no reason now why they can’t finish the season with promotion glory.