Can Carl Robinson lift Newcastle Jets from the doldrums?

More than a year after his sacking from MLS outfit Vancouver Whitecaps, Carl Robinson looks poised to take the reins at A-League side Newcastle Jets.

Robinson watched on from the stands as the Jets went down 2-0 to Melbourne City at the weekend. The result left them firmly rooted to the bottom of the ladder - with only nine points collected from their opening 13 games.

It was this wretched form which cost the previous incumbent Ernie Merrick his job, two years after he lead the Jets to a Grand final appearance.

Despite initial speculation linking former England boss Sven-Goran Eriksson to the position, it seems certain Newcastle CEO Lawrie Mckinna will plump for the Welshman to lead the Hunter Valley side out of the doldrums.

A combative midfielder in his playing days, Robinson had spells at the likes of Wolves, Sunderland and Norwich before he made the switch to the MLS, signing for Toronto FC in 2007. He wasn’t the only Brit to cross the Atlantic in that January transfer window though; with David Beckham famously joining LA Galaxy in a move that shocked the Footballing world.

Whilst his signing didn’t quite make the same seismic waves as Becks, Robinson enjoyed three years at Toronto, then hung up the boots in 2011 after a brief spell with New York Red Bulls.

The following year after a short time as an assistant coach, the man who won 52 Wales caps during his playing career-took charge at the Whitecaps. During his half-decade in British Colombia, Robinson guided the side to three play-off final appearances, before indifferent results saw him lose his job in September 2018. 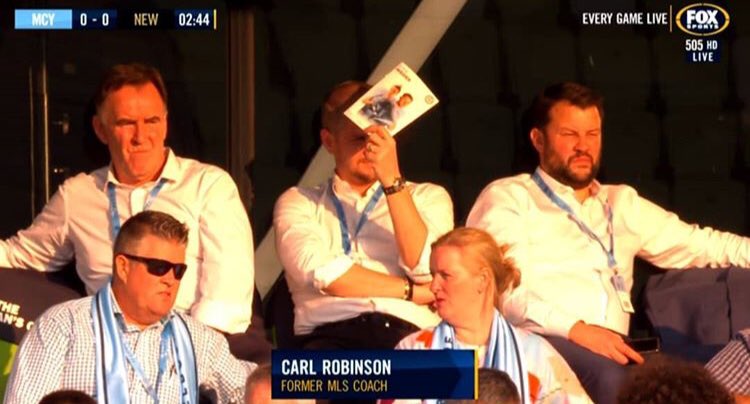 One thing that stands out from his time in charge is Robinson’s ability to get the most out of limited resources. He’s likely to encounter the same problems with the Jets, who won’t leave an open chequebook on his desk.

Some Vancouver fans bemoaned what they saw as a conservative approach under the 43 year old, who favoured playing one lone attacker during his tenure. But clinching three final spots would suggest he had the Whitecaps punching well above their weight.

Others spoke of a great man-manager whose players would be willing to run through walls for him. Robinson will need all of his motivational skills on show to lift a Jets side who have lost their last three matches and have the worse attack and leakiest defence in the competition.

The Welshman has been linked previously to vacancies at Adelaide and Melbourne Victory, so he might be a little more up to speed with the A-League than some may think.

The Jets have endured some rotten luck on the injury front, losing Irish import Wes Hoolahan almost immediately to ankle ligament problems. Robinson will be itching to see the return to the field of the former Norwich star soon.

In addition to Hoolahan, the Jets have also been denied the services of skipper Nigel Boogard and Panama striker Abdiel Arroyo. No doubt losing this talented trio has played its part in their woeful first half of the season.

Robinson can probably spend the remainder of this campaign as a ‘free hit’ as he begins to attempt to lift the Jets from their malaise.  The next few games will allow him to assess his current squad and get to know his new charges.

Unlike fellow Brit Robbie Fowler, in charge at Brisbane Roar, his coaching credentials are established.  There should be some quiet optimism amongst Newcastle fans that he can lead this Jets side to fulfil their potential.