Can Everton throw a spanner in the works for Liverpool?

The last time Everton beat Liverpool in a Merseyside derby was in October 2010. Since then, the Reds have dominated; winning nine times and drawing the rest. In fact, under Jurgen Klopp, Liverpool has been untouchable. The Anfield side has grown from strength to strength in the last three seasons. A place in the Champions League final last term signified the upturn in the club's fortunes after years of struggle to reassert the authority it once enjoyed both domestically and on the continent.

On course to repeat the feat in the Champions League this time around, potentially even going one better, the side is making a run for the Premier League title. Another victory at Goodison Park will mean one more step closer to dethroning Pep Guardiola's Manchester City as champions. But the Everton faithful would love to stop their bitter rivals from using them as a stepping stone to another league title.

That makes for fireworks as Jurgen Klopp's men have been in killer mode this season. Just one loss in the league in 28 games so far means Liverpool is the clear favourite to emerge victorious again, especially given the team's form at the moment. After taking four points from the six on offer by holding arch-rivals Manchester United to a goalless draw in the Premier League return leg at Old Trafford, the team whitewashed high-flying Watford 5-0 during the week. Not to be undone, Everton secured a resounding victory of their own beating Cardiff 3-0 in front of the Welsh fans.

Asides bragging rights, the match also presents an opportunity for under-fire Marco Silva to warm his way back into the hearts of the home fans. The Portuguese manager has not met expectations after splashing the cash in the summer to bring in several players to the club. The Toffees were expected to play some beautiful football this time around and possibly challenge for a top-four place. 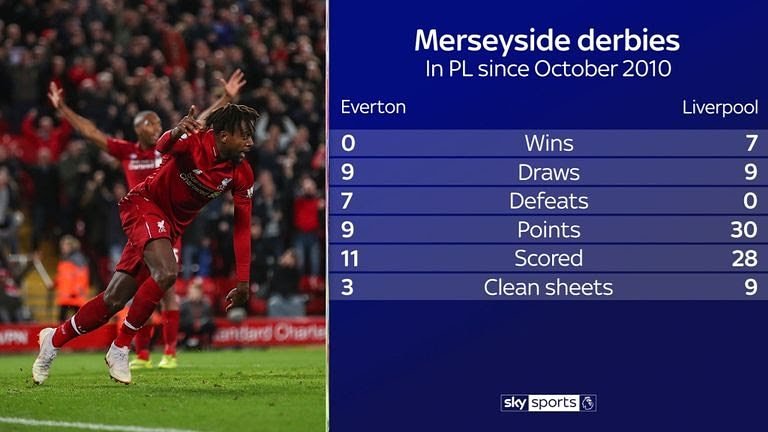 But the side has largely underperformed in the campaign leading to speculations concerning the manager's future. Everton has won just 10 league games all season and as such sit in 10th-place in the able. Failure to beat any of the top six sides all season also means the dream of challenging for a top-four place, much more the title, is still far from reality.

The best result Everton has secured against top six sides has been a goalless draw with Chelsea. In six other fixtures against the remaining five teams, it has been defeats. And as if that is not bad enough, a poor run in cup competitions has added to the miserable form. Getting kicked out of the FA Cup by struggling Championship side Millwall was as low as it can get.

Therefore, springing up a surprising performance that will halt Liverpool's progress in the title race is unlikely to happen. Derby zest notwithstanding, the gulf in class between the two sides makes for an easy pick of a winner in this one. It's a day where Klopp's red army will most likely prevail over Silva's blue.

Looking at the remaining fixtures to the end of the campaign, it's clear barring any surprising capitulation, that only one of Tottenham or Chelsea can pose a real threat to Klopp's side as the season begins to wind down. The title as it stands remains Liverpool's to lose. And the Reds will not give their bitter rivals the pleasure of being the ones to ruin their party before it even begins.