Can Gary Hooper rise the Phoenix from the Ashes?

By Adam Cattell
Australian Football Gary Hooper Wellington Phoenix A League
Will 'Hooperman' save the Phoenix?

He’s scored in all the top four divisions in England, as well as the Scottish Premier League and cup competitions in both countries - not to mention goals in both the Champions and Europa League. Now, Gary Hooper will have the A-League firmly in his sights.

In a week where Wellington Phoenix announced the signing of the former Celtic, Norwich and Sheffield Wednesday forward, the gloom has started to lift over the Westpac Stadium.

It was a tumultuous off-season for the ‘Nix’ who had confounded critics last year in earning a top-six berth. First, there was the departure of manager Mark Rudan to new boys Western United. Then following him over the ditch to the Melbourne side came skipper Andrew Durante and Goalkeeper Filip Kurto.

Add in the loss of young star Sarpreet Singh to Bayern Munich, and the competitions top scorer Roy Krishna to Indian side ATK, it’s easy to see why many were tipping a season of struggle for the New Zealand outfit.

Those predictions may have to be revised with the arrival of Hooper; who has signed a Marquee one-year deal and will don the number 88 shirt.

It was his exploits at Scunthorpe United that earned the Harlow-born marksman a move to Celtic back in 2010, where the goals continued to flow. 63 of them in 95 appearances had rumours of him being on the brink of an England call-up.

A cap for the Three Lions never did materialise though, and after three trophy-laden years at Celtic Park, Hooper made the move to Premier League side Norwich City... 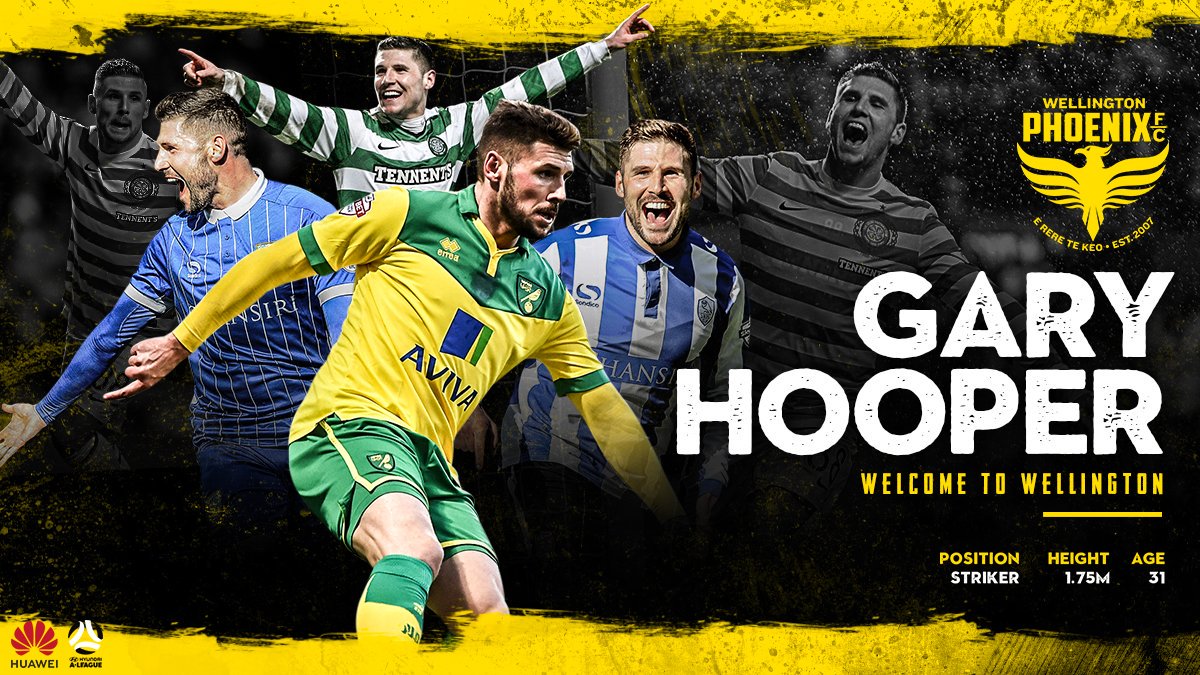 We welcome the former @Premierleague striker, Gary Hooper to the #Nix 😍😍

Despite finding the net six times in the Premier League, Hooper couldn’t avoid relegation with the Canaries and has spent the last 4 years in the Championship with Sheffield Wednesday. Injuries restricted him to just 6 appearances last season before his release from Hillsborough.

When he moves to The Phoenix, he'll find countrymen Steven Taylor and David Ball already there. Geordie Taylor is in his second year now and has since been handed the captains armband by new manager Ufuk Talay.

It’s Ball, the former Fleetwood Town striker, that Hooper is likely to be paired with. Talay’s preference is to operate a 4-4-2 system, with Hooper no doubt the advanced forward. He'll playing off the shoulder of the last defender and making runs in behind - something which he has done with aplomb throughout most of his career.

In the Phoenix’s first outing this term, incidentally against Rudan’s Western Utd, they slipped to a 1-0 defeat, mustering only one shot on target in the process. The arrival of a proven goalscorer could not have come soon enough...

The A-League has become accustomed to seeing foreign imports arriving in the twilight of their careers, usually in their mid to late 30’s with mixed results. For every Alessandro Del Piero that has been a Mario Jardel alongside.

Hooper touches down in Wellington at just 31 years of age. Should he remain clear of the injuries that affected him in 2018, he potentially has another couple of good seasons left in his locker.

This A-League campaign has been a tight affair in the season's early goings with seemingly little between most sides. A striker of Hooper's calibre might prove to be the difference in the Nix making the six - and yet again making the critics eat their words.