By Kingsley Ukpai
Benfica Borussia Dortmund Champions League Christian Pulisic Opinion Pierre Emerick Aubameyang Slider Articles Thomas Tuchel
Last night was all about Barcelona and their memorable and historic comeback (6-1) victory over Paris Saint-Germain, however, another team also ran riot and absolutely obliterated their opponents in last night's Champions League round of 16 fixture. Dortmund is standing up and they must be counted.

Of the eight teams who will fight for a semi-final place in the 2017 UEFA Champions League, two are German teams, Bayern Munich and Borussia Dortmund. While the former were utterly rampant against their English opponents in the first leg at the Allianz Arena in Germany, Dortmund left much to be desired as they succumbed to a 1-nil defeat in Portugal to Benfica.

Last night was, however, a chance for a renaissance for Borussia Dortmund when they welcomed Benfica to the intimidating Signal Iduna Park which accommodates some 80 thousand Dortmund supporters. The Black and Yellows did the needful and did it in some spectacular fashion, scoring plenty of goals for the Dortmund fans to celebrate.

Thomas Tuchel is gradually showing the football world how good a tactician he is – little wonder he is heavily linked to Arsene Wenger's job. Against Benfica, Tuchel, played with his usual back three, in a 3-4-2-1 formation. Marc Bartra, Sokratis Papastathopoulos and Łukasz Piszczek were the centre-backs, while Marcel Schmelzer (left) and Erik Durm (right) featured as wingbacks, while also deputising as attacking wingers depending on who had possession. 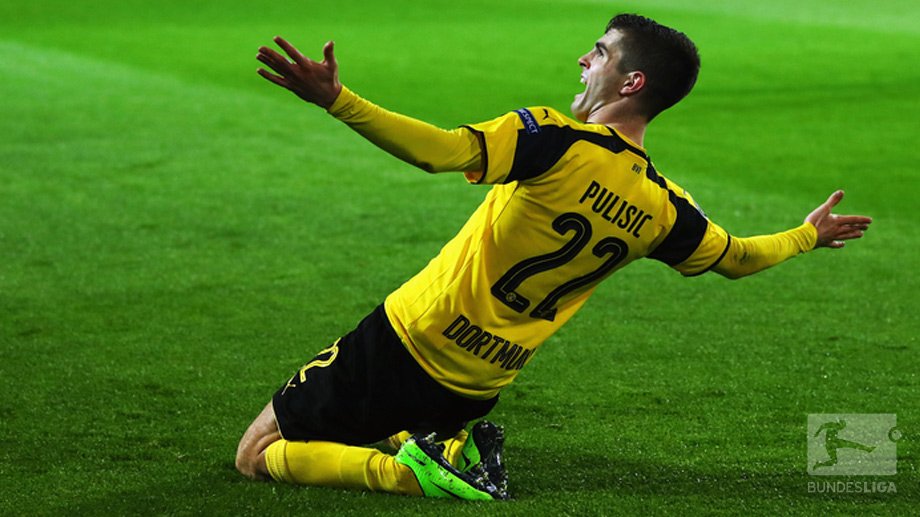 Bundesliga English
Bundesliga_EN
Follow
What a night for @cpulisic_10:
First #UCL goal ✅
Youngest #UCL goal-scorer for @BVB ✅
#UCL #BVBSLB https://t.co/iTktA8ASOW
Follow
21:53 PM - 8th Mar 17
143
338
The American teenager, Christian Pulisic, was given the rare opportunity to shine as he replaced injured Marco Reus from the side that lost 1-0 in Portugal. Pulisic and Ousmane Dembele, playing in front of Gonzalo Castro and Julian Weigl would provide support for Pierre-Emerick Aubameyang – Dortmund were poised to attack all night long.

Thomas Tuchel's tactics were the masterstroke. Dortmund broke forward at will and equalised on aggregate with just 4 minutes played. 18-year-old Christian Pulisic flicked the ball to an unmarked Aubameyang, who scored with the easiest of headers. 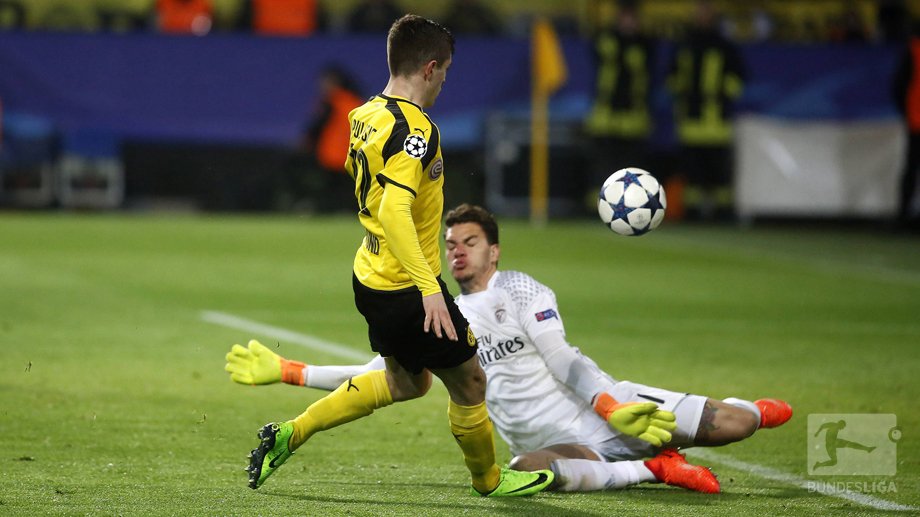 Bundesliga English
Bundesliga_EN
Follow
Just a stunning finish from @cpulisic_10 Is he really only 18 years old?! @BVB #skills #talent #youth #future #UCL #BVBSLB https://t.co/tOulgUBPBl
Follow
21:22 PM - 8th Mar 17
54
151
The attacking abilities of Pulisic were unmasked to the Benfica defence, as he constantly terrorised them with his pace and skill. The young American got his goal in the 59th minute, latching on to a through ball from Łukasz Piszczek and dinking the ball over an onrushing Ederson Moraes in the Benfica goal.

By the 85th minute, the crowd were singing his name and when he got substituted a minute later, the sitting Dortmund fans joined the majority standing, to give him a rousing standing ovation.

Aubameyang had had a first leg to forget at the Estádio da Luz in Benfica – the Gabonese international spurned a plethora of clear-cut goalscoring chances and capped up a dismal display by missing a penalty. It was, however, a different man that welcomed Benfica to the Westfalenstadion. If Benfica had managed in frustrating and shackling him for the 62 minutes he was on the pitch in the first leg, they found no answer to his superb positioning and ability to ghost through the defence in the second. 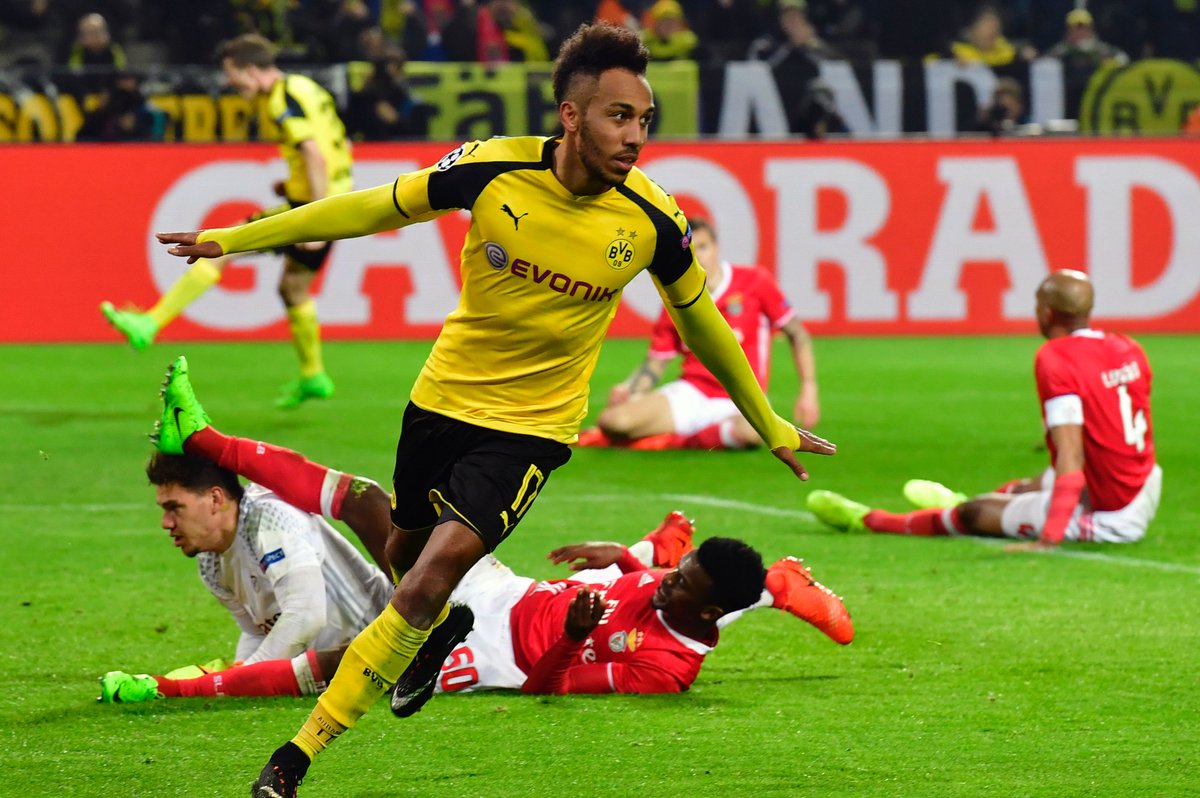 OptaJoe
OptaJoe
Follow
5 - Pierre-Emerick Aubameyang is only the 5th different African player to score a CL hat-trick after Drogba, Eto'o, Brahimi & Yakubu. Star. https://t.co/M0Mqh6xrpI
Follow
21:40 PM - 8th Mar 17
321
268
Although he didn't score a spectacular goal, Aubameyang was the man of the evening. He was at the right place at the right time on every occasion and staked claim to the match ball by scoring a hat-trick. The Gabonese forward now has 7 goals in the competition, 4 less than Lionel Messi, who is the current top scorer.

Dortmund should be feared

I don't see last night's victory by the Black and Yellows as a one off; they played free flowing attacking football, created the gaps and scored goals. Even without Marco Reus, Dortmund still showed so much zest going forward, with Christian Pulisic proving to be a worthy replacement. The Dortmund defence was also equal to the task, snuffing out the threat from the opponents and keeping a clean sheet.

With such an impressive performance, no team can consider them as pushovers in this competition.