Chelsea will face a two-window transfer ban and cannot sign a player until the summer of 2020. The London club was “astonished” to see their appeal of getting the ban freezed.

Moreover, the summer signings Kepa Arrizabalaga and Jorginho haven’t had the impact which was expected. Defeats to Bournemouth and Manchester City have made their goal of qualifying for Champions League next season hard. They lost the Carabao Cup final to City and got eliminated by Manchester United in the FA Cup. Maurizio Sarri cannot guarantee the Europa League trophy as they face tough competition there too... This, coupled with the transfer ban, leaves Chelsea in a very volatile situation.

The problem runs deeper with the players. Cesar Azpilicueta is not a traditional right-back and he doesn't have the usual desire to move forward from the right flank. On the opposite side, Marcos Alonso leaves acres of space while going forward, often leaving the defensive shape compromised. Antonio Rudiger and David Luiz are highly inconsistent while Andreas Christensen lacks experience. The Blues also lack a solid figure in the midfield to complement the brilliance of N’Golo Kante and Jorginho. Chelsea are also thin in numbers in that area of the park.

Offensively, only Eden Hazard is clicking for Sarri. Pedro and Willian have peaked and don’t produce the same flair they used to. Christian Pulisic will arrive from Borussia Dortmund but it's very difficult to say that he will have an instant impact. It is highly unlikely that Tiemoue Bakayoko and Alvaro Morata will return next season as they are happy in Italy and Spain respectively. Furthermore, the rumours suggest Mateo Kovacic will not be in London next season. It only worsens the situation.

We are aware of Chelsea’s policy for instant success. Sarri has failed to replicate the pedigree former managers achieved. It would be a mortal sin to blame Sarri for it. But, we are expecting to see a change in patterns here. Club owner Roman Abramovich understands that planning for the future take a stick in the beginning but yields sweet results in a longer run. This gives Sarri a little bit of freedom to go and do his thing. He should grasp this opportunity with both hands. He has nothing to lose. In such circumstances, he should trust the younger ones at his disposal. And he should be proactive and start it as soon as possible.

Chelsea has an unending torrent of youngsters with tremendous potential. Currently, they have the likes of Callum Hudson-Odoi, Ruben Loftus Cheek and Ethan Ampadu who are ready to showcase their talent from the next game. Hudson-Odoi has already made a massive impact which left the fans flabbergasted after his performances in the Europa League. Loftus-Cheek has shown great promise and brings surety of producing more in the final third than what we see now. Ampadu can be the futuristic archetypal midfield maestro while his brain works five years ahead of what he is now.  Next season, more such names will arrive.

Reece James can be a refreshing option and an able deputy to Azpilicueta. The 19-year-old is a regular starter for Wigan Athletic this season winning three consecutive club’s Player of the Month awards this season.

Kurt Zouma has given his audition multiple times and passed with flying numbers. Loan moves to Stoke City last season and Everton this season has matured him and polished his defensive abilities. While Gary Cahill will probably leave Stamford Bridge at the end of this season, you can see Zouma replacing him perfectly. 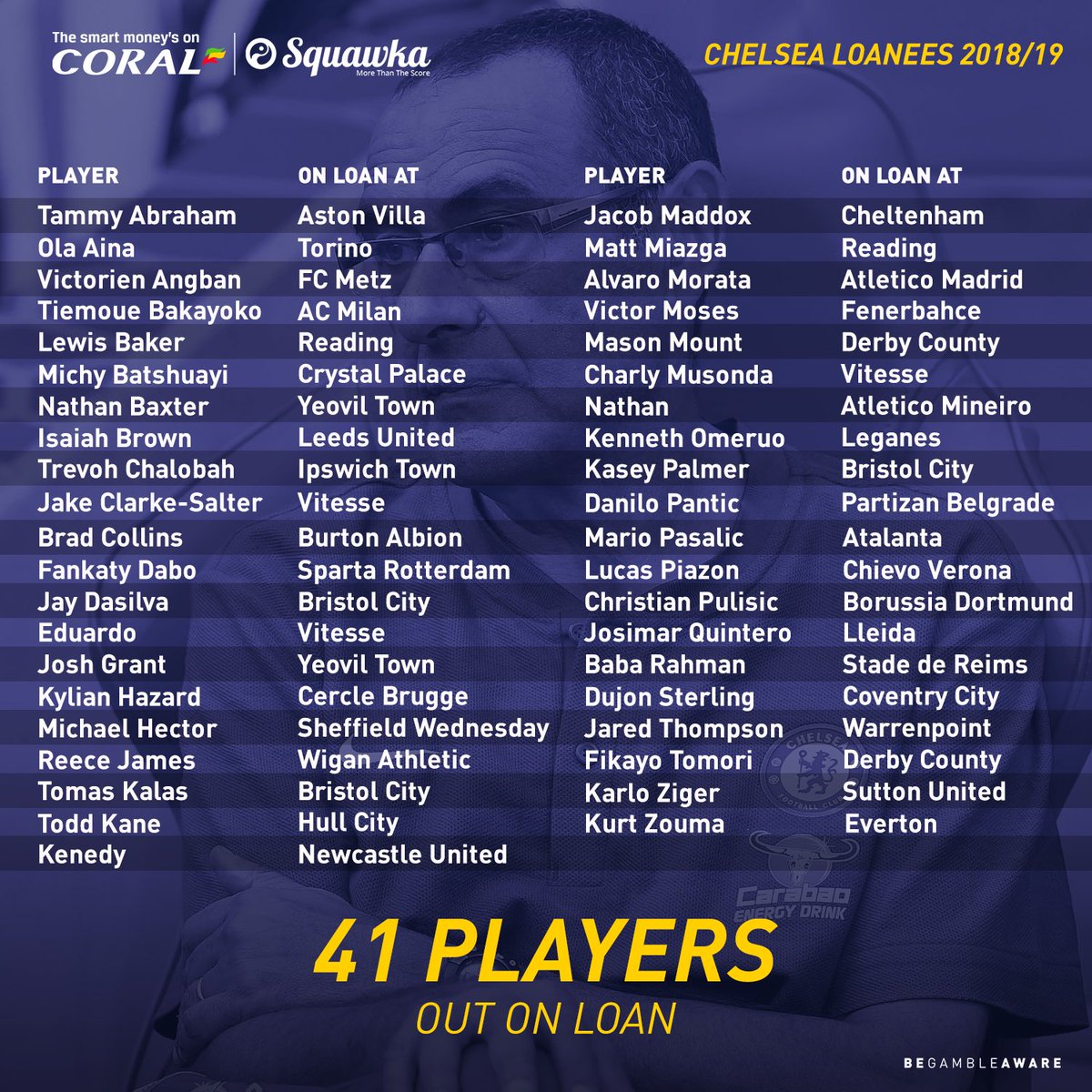 Along with Loftus-Cheek and Ampadu, Mason Mount can be a wildcard entry in Chelsea's midfield. The U-21 England International is currently under the guidance of Chelsea legend Frank Lampard at Derby. Mount has been a regular starter and creative engine for the Rams. and illustrates a similar skill set of Cesc Fabregas who's void is due to be filled.

Like Zouma, Tammy Abraham has been patient and proved why he deserves a chance. He is on a goal-scoring spree with Aston Villa can give some competition to Higuain who is struggling to adapt to the pace of Premier League. Another option is to go with Michy Batshuayi, who is on loan to Crystal Palace. The Belgium international has never lived up to the hype which was there but one would not complain about having options at your disposal.

All in all, there are too many options for Sarri. These opportunities are rare and not all managers get it. There’s nothing more you can give to an academy player than a chance to represent his club at bigger stages. Marcus Rashford, Trent Alexander-Arnold and Harry Kane are aware of the feeling. The ban is a golden opportunity and an excuse (whatever) Sarri and assistant coach Gianfranco Zola could use to experiment with youngsters. And looking at the current options Chelsea have, it would be a false prediction to say that all the aforementioned names will fail. Chelsea boss can make his name reverberate in Chelsea fans’ bones for years to come.