The French manager shouldn't stop there however as if he wants to bring home the EFL Cup and rescue a deflating league campaign then he needs to be reunited with Paris Saint Germain's currently alienated genius Hatem Ben Arfa.
OGC Nice are amazingly chasing the French League title this season as they fight the mega rich PSG and AS Monaco head on. This somewhat surprising challenge is based off the back of their previous campaign in 2015/16 where from absolutely no-where they were chasing the Champions League places despite only expected to be a mid table team at best. This was down to bringing in a player from the football scrapheap who didn't have a club, who was unfit but did have amazing talent. That player was Newcastle and briefly Hull City outcast Hatem Ben Arfa.

Nice needed a player like Ben Arfa and Ben Arfa needed a team like Nice. A team with no expectations that would give him the platform to perform week in week out and potentially be their headline act if he got himself match fit. The enigmatic Frenchman did not disappoint as he tore through Ligue 1 almost from day one right through the whole season as the small French club were agonisingly close to qualifying for the Champions League. All of which was under the guidance of current Southampton boss Claude Puel.

Ben Arfa has been linked to join Saints before as when Puel left Nice to go to the South coast club, Ben Arfa was also leaving Nice on a free transfer. However, with likes of Barcelona looking into his signature the chances of him landing at St Mary's were extremely thin. It was PSG who finally gave Ben Arfa a 2-year contract in hope to he could re-create his blistering form for the French champions. Unfortunately for HBA he has not been given a genuine chance by new boss Unai Emery to show his talent and is consistently left on the bench and given 10-minute cameos near the end of games or left out the matchday squad completely.

This is a sorry sight for Ben Arfa as his blatant talent is a crime to be wasted sat on the bench as he was arguably the best player in the whole of France last season, definitely the most exciting. If Claude Puel could rescue the skillful winger from his PSG slumber, even for just the rest of the season on loan, that would give Southampton a massive boost to kick start their league campaign and also give them a much better chance of winning the EFL Cup final.

Ben Arfa had an amazing season in 2015/16 as he scored 18 goals in 34 games and had some of the best dribbling stats in Europe with he averaged 4 successful dribbles per game! Which is incredible. The French international would definitely add some quality to the Saints forward line as it has failed to ignite this season and got even worse when Charlie Austin was put out of action for four months. Ben Arfa ex-team mate Boufal has failed to live up to expectations, Redmond & Tadic have rare moments of quality, Rodriguez doesn't seem up to full match speed and Shane Long hardly gets a kick. 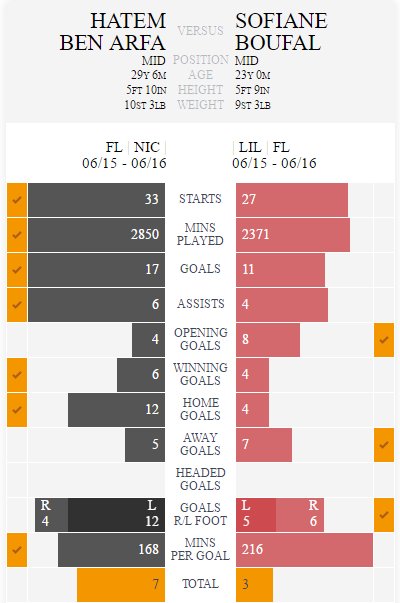 https://t.co/UF8DXP3TS1 https://t.co/RBPI10iv2l
Follow
21:50 PM - 24th Sep 16
0
0
Hatem Ben Arfa is one of the most exciting players in Europe and can play in any of the front three positions and would slot into the team instantly. Claude Puel should be moving Heaven and Earth to add him to his squad before Tuesday night's deadline day closes.