On Wednesday, West Ham United midfielder Declan Rice announced via his social media channels his intention to switch his national allegiance from the Republic of Ireland to England. The 20-year old has played in three friendly games for the boys in green, having been capped from U16 level.

FIFA rules state that players are able to request to change their national team association providing that ‘He has not played a match in an official competition at ‘A’ international level for his current association…’ As Rice has only appeared in friendlies, he is able to decide that his future lies within the England setup.

The choice on which national team to represent has been hanging over the player for a while but was not one that he was expecting to make so soon in his career. Rice made his Premier League debut less than two years ago, in May 2017 and was included in the Ireland squad just days later...

Rice was born and raised in England but qualified to play for Ireland through his grandparents. He was left out of Martin O’Neil’s Nations League squad in September, with the player deciding on whether to switch allegiance, after having talks with England.

With the decision now made, it has received a mixed reaction from fans and former players of both countries. The debate about if switching countries should be allowed has reared its head.

Former Republic of Ireland player Andy Townsend weighed in on the argument.

Once you've played international football at senior level, then that's it, that's your commitment to that country and that's the way it should stay.

Rice was extremely young when starting his international journey through the Ireland youth setup. His first call up to the full team came at just 18. He had one Premier League appearance. It would be unfair to expect a young player to turn down the chance of international recognition just in case another country may come calling in the future. 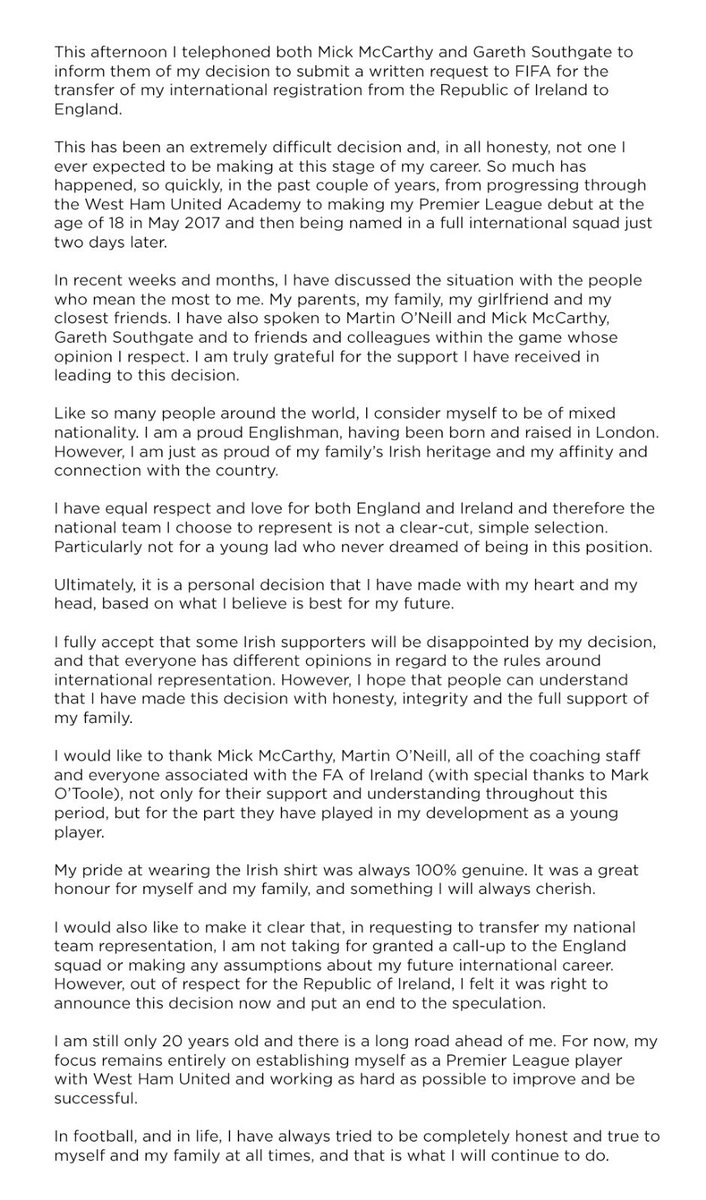 I accept It is harsh on the association that has worked hard to develop the player through their youth teams. But, the flexibility to be able to switch national teams means that young players are less likely to make rash choices. It allowed Rice to take his time to make the ‘extreemly difficult decision’. For players of mixed nationality, it allows them to be certain that they are making the decision that is right for both them and their families. It is often forgotten that they are humans too.

Although Rice's decision seems to have sparked the debate, the West Ham man isn’t the first to switch national team representation. Wilfried Zaha played in two friendly games for England in 2012 before making his Ivory Coast debut in 2017. While Diego Costa played for Brazil in 2013. He switched to Spain just a year later.

Although the player made it clear in his statement that he wasn’t taking a call up to Gareth Southgate’s Three Lions squad for granted, reports suggest that the England manager is keen to involve him in the first team fold.

Rice’s main position is as a defensive midfielder. He is the shield in front of the back four for West Ham. It is the position that he has played for his club this term. But in his breakthrough season last year, the 20-year-old was often deployed in the central defensive areas. The position that he played for Ireland. This flexibility will appeal to Southgate. The addition of Rice to the squad would add competition for the likes of Eric Dier and Jordan Henderson.

As one of the first names on the team sheet at the London Stadium, Rice is playing Premier League football week in week out, which is vital if he is to break into the England team. He also fits the mould of players that have so far, been successful for Southgate and his backroom staff. The culture around St Geroge’s Park is to give young players a chance; the recent selections of Ben Chilwell and Jadon Sancho highlight this. At 20, Rice could well be the next growing talent to pull on the Three Lions shirt.

Here we go again. The hopes of a nation rest upon the shoulders of our Three Lions. The 'It's Coming Home' chants have started, as has the usual banter with both Scotland…

What have we learned from Gareth Southgate's latest England selections?
By Simon Hahn

As attentions turn towards this summer’s European Championships, all eyes are on England manager Gareth Southgate in regards to who he'll pick for the tournament.…