Upon his return to England’s North West, Memphis Depay attempted to say all the right things. In doing so, he came off a bit like Christian Bale and Liam Neeson in Batman Begins. You know, as if he still doesn’t pay attention to his surroundings.

Of course, he’ll tell you otherwise.

I have been improving a lot, not only on the pitch but off as a person. I've become more mature.

That sounds promising. The young Dutchman left Old Trafford in disgrace. His poor back pass against Stoke led to a goal. Compatriot and boss Louis van Gaal never trusted him again. Whether it’s because the younger man didn’t take the error as seriously as the club is merely conjecture.

He’s certainly put in the work with new club Lyon to make himself critical to their success. In the first five games this campaign, he’s potted a goal and two assists. Last campaign, he led OL with 22 and 17 in all competitions, making Les Gones faithful forget Alexandre Lacazette.

But when he arrived in Manchester, patting himself on the back for his improvement, magnanimously answering questions about a possible United return, adding, “Manchester is still red,” one could only imagine City players cracking their knuckles while waiting to respond in Wednesday evening’s Champions League Group F opener.

Memphis backed up his incendiary remarks, however. The 24-year-old stayed on his bike throughout the first half, pedalling furiously, pressuring City defenders looking to play from the back, creating chances with the ball at his feet. More importantly, his teammates rode with him.

Pep Guardiola was banished to the stands, serving his sentence for excessive dissent over a disallowed goal in last season’s Round of 16 second-leg against Liverpool. Mikel Arteta was charged with reversing a three-game losing run in the competition. Perhaps the Sky Blues were at a loss without the familiar sight and sound of their manager frantically issuing instructions. Before they knew it, City were two goals down. 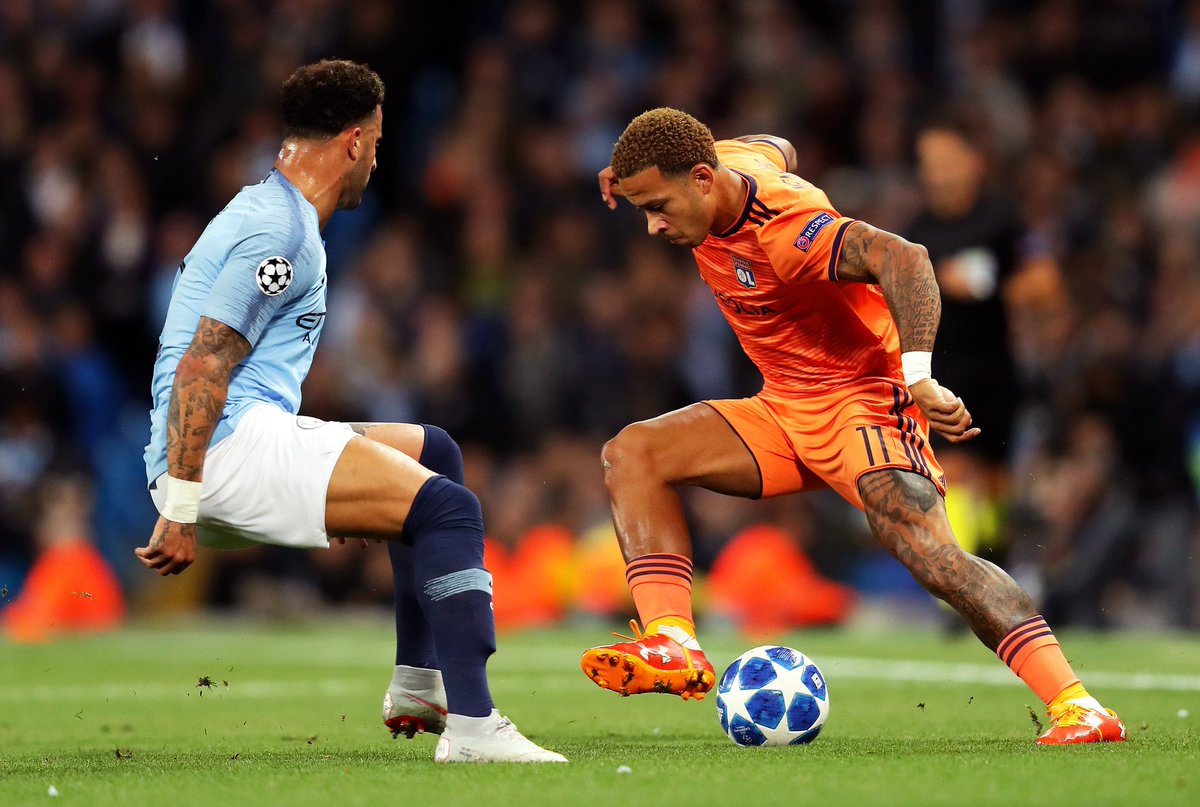 Maxwell Cornet, another tireless runner on the right wing, opened the scoring on 26 minutes. Just before the half, Memphis set up Nabil Fekir for the second. City rang the changes in the second half. Leroy Sane showed his hustle whirling like a dervish and providing a finish for Bernardo Silva when you’d expect it to work the other way around. One’s all the Premier League Champions could peg back, though. Their losing streak in Europe extends to four matches, precisely the sort of crisis that raises doubts regarding Guardiola’s powers.

On the other hand, Depay’s work sparks interest in a possible return. United still own right of first refusal on any transfer involving the Dutchman. Memphis is another left-side or central player, in whom the Red Devils are overstocked. There appears to be no need to bring him back. At this point, interested clubs need to back Lyon into a corner to pry him away.

During the winter window in 2017, Mourinho told reporters he’d welcome Memphis into his squad, describing him as “a fantastic professional.” A year later, the opportunity to sign Alexis Sanchez arose. The Chilean is yet to do more than flash his brilliance. Mourinho even waved him back to the bench in the Champions League match with Young Boys when Anthony Martial scored as he stood in the technical area, ready to enter.

No one’s saying Mourinho is disillusioned with Sanchez. That the manager elected to stay with Martial translates better as a desire to see the Frenchman come good like Luke Shaw. At the same time, the Portuguese is notoriously fickle regarding attacking players. There’s no reason to think Memphis isn’t in the back of his mind as another prodigal signing if the need ever arises. Paul Pogba’s the one every United fan recalls as returning to the fold after four years with Juventus. They’ll also mention he changed his mind regarding Romelu Lukaku. Few may realise Mourinho also brought Nemanja Matic back to Chelsea after letting him be sold to Benfica.

Having been on a year-long hiatus from blogging, you can imagine my groan when news of the European Super League broke just as I was excitedly preparing to return. While no hand was…