After making a stunning start to the 2019 Copa America, Manchester United and Chile fans were questioning whether the 'real' Alexis Sanchez was finally 'back'. Well, it's fair to say those hopes were short-lived. La Roja were put to the sword in a 3-0 drubbing by an in-form Peru. The wider impact this could have on his career is detrimental.

It feels as though even when he's playing well, Sanchez still cannot catch a break. At Arsenal, the all-action attacker was amongst the best players in the country. United sucked that life out of him pretty quickly - as they have tended to with most superstars who have called Old Trafford their home lately.

I think it's summed up perfectly by the point that when he started well for Chile in this year's Copa, fans weren't asking United to give him one final chance, but instead, they were hoping his inspired performances against Japan and Ecuador would finally confirm his exit from Salford Quays. Has his poor end to the tournament meant that his time at the Theatre of Dreams, or in this case, nightmares, been prolonged?

The worst possible scenario for all involved parties has seemingly played out. United fans were practically promised outgoing transfers this summer. We're yet to see any major sales of note (minus a few free transfers here and there). Sanchez departing could be the first domino that falls, paving the way for a mass exodus in Manchester. After looking as flat as an old battery over the last couple of Copa games, who's going to want him? 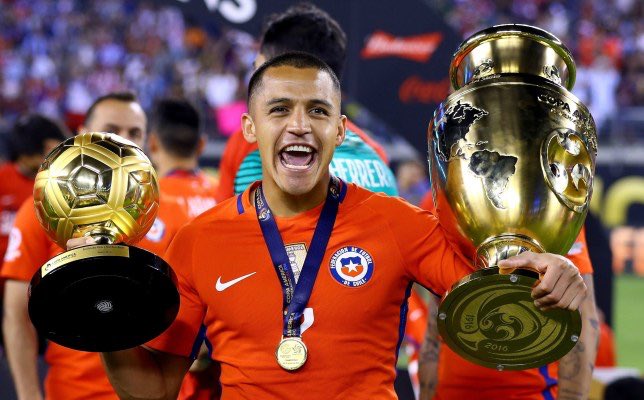 With Man Utd: gets destroyed by Peru

Hindsight is a wonderful thing, but even the most devoted reds fan knows that handing the former Arsenal £500,000-a-week was going to be a costly mistake. It's a wage they're stuck with until summer of 2023. That's still three seasons away, and this wrecking ball-like effect he's having on the squad could continue for a little while yet. Somehow, some way, if Edward Woodward can get him off the books, it'd be like a weight being lifted off United's shoulders. The simmering pressure cooker at Old Trafford will be lukewarm rather than boiling hot. Shifting him on is obviously easier said than done, mind...

Perhaps Ander Herrera would have been more inclined to stay if Sanchez wasn't still at the club. Maybe David de Gea would have already committed to a new long-term deal by now. After all, not only would United have had more money in the kitty to pay these guys, but their demands wouldn't be anywhere near as ridiculous as they are. I've no sympathy with the 20-time Premier League champions in that regard. They've made their bed.

At this stage, any deal that takes his wages off the books has to be seen as a profit. Aged 30, there's no way United are going to recoup some of that money back in transfer value as he's just too old to carry a fee of significance. The concern is that there's only a handful of clubs who could afford to meet what he's currently pocketing at Old Trafford. I'm not sure any would consider taking a gamble on him at this point - even if United decided to subsidise his wages.

Sanchez's situation is similar to that of Wayne Rooney's a few years ago, but without the deeprooted ties to the club. He's past his best and it's actually quite sad to see. I don't put any of the blame on the player, heck, he'd be mad to turn down the money that United offered him, but this burden will continue until Sanchez starts performing on the pitch once again. The problem is, I doubt he ever will...