Was Juventus the right choice for de Ligt?

Four months after scoring a powerful header to eliminate Juventus from the Champions League, Mathijs De Ligt is now wearing the black-and-white jersey of the Bianconeri, just not for 90 minutes every week. His record-breaking exploits with Ajax last season won him a lot of admirers. Whether Maurizio Sarri was one is suddenly in doubt.

It was Barcelona who initially demonstrated serious interest. After signing his Ajax colleague and best mate, Frenkie de Jong, before the window opened, all signs pointed to the Camp Nou as De Ligt's destination. The teenager preferred to blaze his own trail.

Rather than follow his friend, De Ligt joined Juventus on a five-year deal worth €75 million, ranking both among the most expensive Dutch players in history.

With the Old Lady's backline comprised entirely of old men, the youngster was expected to walk into the starting XI [without the help of a cane]. His talent, physique, demeanour and potential have legend written all over them. Legends develop over time rather than overnight, however, and Sarri is apparently demonstrating his patience.

While De Ligt might hope to emulate defenders such as Cafu and Lillian Thuram who moved to Italy and established themselves as elite defenders, it is proving easier dreamed than done. A few days into his Juventus career, question marks have arisen.

The centre-back began his journey with the Bianconeri in an unwanted manner. Given the chance to feature for the club for the first time as Maurizio Sarri's men clashed with Inter in the preseason, he conceded an own-goal just ten minutes into his debut.

It might have been a friendly, but that isn't the way any player would want to start life in a new club. While his coach played down the incident, it wasn't enough to clear the ground as a few eyebrows were still raised. Unlike the Nations League semifinal with England in which he made a similar gaffe but rose to head home the equaliser, redemption wasn't forthcoming in this match.

This time, the error was just the tip of an iceberg. Further misery came De Ligt's way when the new Serie A campaign kicked off. Fans expected to see him in Maurizio Sarri's lineup against Parma but the defender could only get a place on the bench. Worse, he remained an unused substitute throughout the game.

Many saw that as an indication that De Ligt wouldn't have it easy in Turin. The defender probably had the same feeling. That might be why he aired his frustration after the game. At this early stage, the youngster is feeling the pressure.

Meanwhile, Frenkie de Jong enjoys a bright start to life in Catalonia. The midfielder featured regularly for Barca during the preseason and emerged one of the top performers during their Asian tour.

De Jong is firmly rooted in Ernesto Valverde's plans. Despite the level of congestion in the midfield, the Blaugrana are providing opportunities for their new signing to flourish. The playmaker needn't look to the future. He's living his dream now.

At this stage, given the contrasting experiences the two players are having, one could be forced to question whether De Ligt made the right decision. While everyone will surely have their respective opinions, early indications are negative. What's done is done, though. All the youngster can do is work to change his manager's mind. 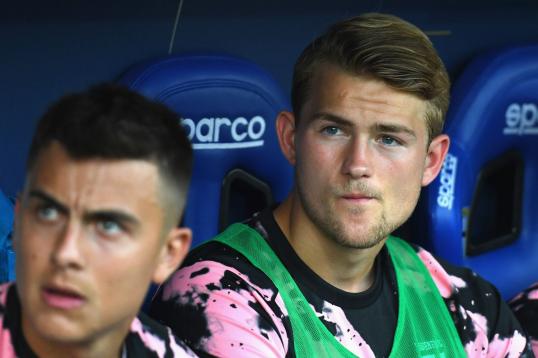