Pep Guardiola and Manchester City stepped into the current campaign with high hopes. The club dominated English football last term, winning an unprecedented domestic treble. But it was not just about the trophies. The team played some scintillating football. That raised the level of expectations from the club’s faithful heading into this campaign with many expecting another Premier League masterclass and a push for the Champions League. Unfortunately, things have not gone according to plan with defensive woes crippling the squad.

Centre-back powerhouse captain Vincent Kompany left the club at the end of last season. After 11 years of success at the Blue side of Manchester, the Belgian chose to depart when the ovation was loudest. Manager Guardiola was convinced he could carry on without finding a replacement. With Nicolas Otamendi threatening to leave for lack of game time, the Catalan thought it wise to refrain from making an additional signing in order to give his three centre-backs enough game time.

Unfortunately, the best of the bunch, Aymeric Laporte got injured early into the campaign. John Stones has also spent a huge chunk of his time at the Etihad Stadium nursing one injury or the other. This season has been no different. The situation has caught the Catalan gaffer off-guard. That has led to frantic measures to remedy the situation. Drafting midfielder Fernandinho as a makeshift centre-half has not produced much success. The result is a leaky defence that has shipped in almost double the number of goals Liverpool has conceded midway into the season.

Jurgen Klopp and Liverpool are now in a position to consolidate on last season’s success. After lifting the Champions League, The Reds are closing in on a maiden title of the Premier League era - and they are doing it in style. Yet to lose a single league game after 19 matches, the Merseysiders are already considered champions in waiting. 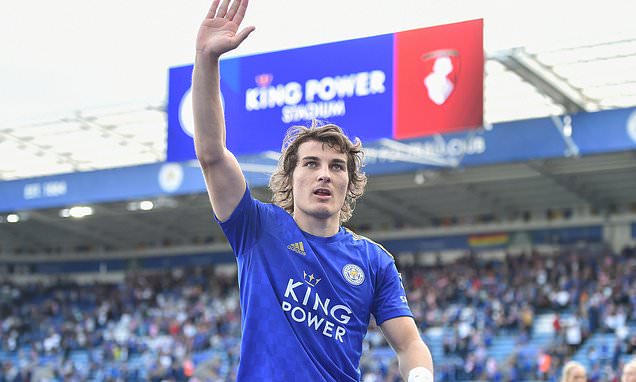 As it stands, even a top-four place could be at risk for Man City if the state of the defence continues. Although Laporte is expected to be back before the end of January, regaining top form could take some time. Even if the Frenchman hits the ground running, he will need the right man to form a solid partnership with. It’s not surprising then that Leicester City’s Soyuncu is now linked to the club.

The Turkish international has been amongst the outstanding performers at Leicester. His partnership with former Manchester United centre-back Jonny Evans has helped the Foxes to second on the table, a point above the Cityzens. In fact, up until the team faced City and Liverpool recently, it had the best defence in the division. It now ranks second only to Liverpool which is no mean feat. Given his importance in the team, Leicester will do everything necessary (including demanding a ridiculously high price) in order to keep him.

Manchester United paid £80million, a world-record fee for a defender to secure the services of Harry Maguire in the summer. Soyuncu, who can play on either side of the defence, stepped up as his replacement and has been excellent for the Foxes. Naturally, the club will not be willing to part with him for less than £80million. As was the case with Maguire, Guardiola will not want to pay such a fee for the 23-year-old.

Certainly not when there’s a possibility of signing Napoli’s Kalidou Koulibaly either in January or in the summer. The Senegal international is unsettled in Italy and the club is now willing to do business after initially taking a hardstand. At 28, he still has several years at the top level. For such an elite player, playing alongside Laporte will give City one of the best centre-back partnerships in Europe. His ball-playing abilities also suit Guardiola’s style making him a much more suitable candidate for City.

But if the competition for his services proves too fierce, attention can shift to Inter’s Milan Skriniar. Although Antonio Conte is carrying out a new project with the Nerazzurri, the lure of playing for Guardiola and the Premier League could prove too strong to resist. Where any of these options are still not available, the club can get better alternatives elsewhere rather than having to break the bank for a player that is good, but not world-class. The bottom line? Manchester City does not need Caglar Soyuncu.