Welcome to the fourth and final instalment of EFL combined XIs from four sets of clubs who share the same name. If you need to catch up, the all-City XI can be found here, the all-United XI here and the all-Town XI here.

The concept is simple. Compile a squad representing all of the various Rovers and Wanderers in the EFL, though not the Premier League [sorry Wolves] or non-league divisions.

Even combined, there are fewer Wanderers and Rovers in the professional ranks than Cities, Towns and United sides. Maybe that's because, as romantic as the names sound, club founders were worried they wouldn't generate enough support if it sounded like the side wasn't going to stick around too long.

For the greater part, they did, however. Some even enjoyed more amazing runs than NASA's Opportunity rover which, sadly, was declared deceased recently after scientists failed to make contact with the all-terrain vehicle that had been exploring Mars for 5,352 days after only being designed to last 90. While it sent more data than anyone ever hoped, it won't be bringing home silverware like Blackburn Rovers did when they won the Premier League in 1994/95.

This squad is a little imbalanced but I fancy they could lay their hands on a bit of treasure if given the opportunity. Have a look at the choices, then pillory me in the comments section for not picking your man.

Forest Green Rovers started this season as they finished last, in great form. Sitting fifth in League One, their march up the English pyramid in recent years appears unabated. Despite defeat in the 2018/19 playoffs. these Rovers were always likely to stick around. After Losing twice in league play, Mark Cooper's side are now on a four-game unbeaten run in which they have not conceded a goal. They boast the third-best defensive record in the three EFL divisions, with opponents limited to five celebrations.

Goalkeeper Lewis Thomas was not expected to be in this position. He started the season as Cooper's second choice with the potential to go out on loan. Then first-choice keeper Joe Wollacott was sent off against Newport County and Thomas took his chance.  In five games as the NO.1, he kept four clean sheets. Wollacott's 'suspension' turned out to be longer than expected. 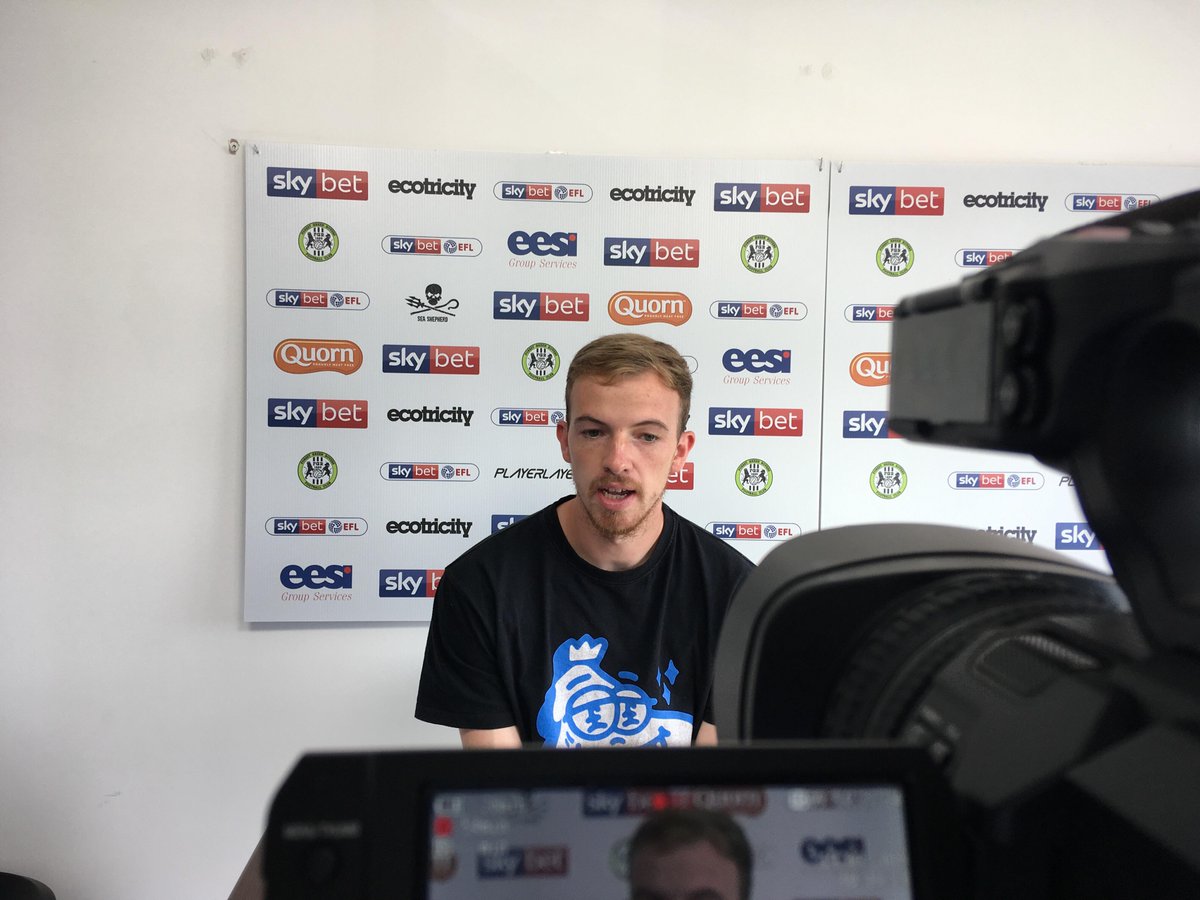 Forest Green Rovers
FGRFC_Official
Follow
Lewis Thomas: “Things can change so quickly in football. I was expecting to go out on loan at the start of the season and there were a few clubs interested, but the main thing is I'm here and I'm happy.” https://t.co/B6nkCFoLco
Follow
11:47 AM - 19th Sep 19
1
32

The Gas are now in their fourth season in League One following back-to-back promotions from non-league football. They've plateaued as a mid-table team with finishes of 10th, 13th and 15th. The slight backwards slide is a concern, though. In an effort to reverse the trend, they've started in eighth, losing only twice and on a five-game unbeaten run at the moment. With four of their next five at home, they might climb even higher.

After a fantastic career, the 34-year-old Craig continues to play a vital part for Rovers in his second season at the Memorial Stadium. Having made over 100 appearances for both Millwall and Brentford, he is closing in on that tally for Bristol Rovers. Following Josh Hare's long-term injury, Craig's leadership becomes even more vital.

Named full-time captain in the summer, Mills is stepping up to the mark, leading the division's best defence. Three goals at the other end saw him shortlisted for the League Two Player of the Month award.

With one of the best squads in the league, a super start and Mills marshalling the backline, expect Mark Cooper to have his side in League One next term.

Wycombe were promoted into League One in 2018. They were welcomed by being dragged into a relegation melee. After surviving, they've gone from strength to strength this season. In heady company after ten games, Gareth Ainsworth's Chairboys are third on a solitary defeat.

Welshman Jacobson is moving towards his career's twilight but was critical to the Wanderers' success in recent years. The wing-back contributes at both ends of the pitch. He scored an amazing hat-trick against Lincoln City in September, scoring from three set-pieces, two of which were corners.

While this rearguard is overloaded to the left, Mills won't want to settle who plays on the right via a dead-ball challenge.

Back-to-back promotions for Tranmere were beyond anybody's wildest expectations but this year appears to be a battle to survive. James Norwood's move to Ipswich was a heavy blow.

At least Micky Mellon still has his other leader in 24-year-old Monthe. The club's Young Player of the Season recipient signed a new deal in the summer despite interest from elsewhere.  Even though the Super Whites haven't kept more than the one clean sheet, he plays an important role. This season will be a grind has the maturity to lead his teammates through it. While the Prenton Park squad has been leaky at the back, Monthe compensated by creating three goals in the attacking third.

Rovers Chat
rovers_chat
Follow
Final thought of the day before we're done for the night.

Bradley Dack showed exactly what he was about today on a milestone for him. Took the ball so well and made us tick.

Blackburn are a huge club, one of the few teams who have a Premier League title to their name. After struggling through this decade, they were able to bounce back /at the first time of asking by winning promotion from League One in 2018/19. Last season was spent in the relative comfort of the Championship midtable. Ending up 15th, they were closer to the playoffs than relegation in points.  Tony Mowbray's side improved in the early doors, albeit not spectacularly. They lie tenth and only two points off the playoff pace.

Bradley Dack is very much the superstar of the team. While earning his century cap with the club, he scored his 40th goal in a 2-1 victory over Reading. He has everything the manager and fans want from a modern-day midfielder, scoring and creating with flair. Still only 25, Blackburn’s biggest problem will be keeping him. A Premier League club is bound to come calling.

Donny have been all over the English Football League in the last decade, but have settled into a three-season League One run. They barely made the playoffs last season before losing in a dramatic playoff semi-final to Charlton Athletic on penalties.

Whiteman is a typical box-to-box midfielder. He'll step in front of any shot, cuts out passes like a telepath and can start the attack in the blink of an eye. While a physical player, he remains in control, averaging less than two fouls per game and taking just two bookings. Going the other way, he also makes big contributions including the winner in the final minutes against Rotherham earlier this month.

Bolton hit the headlines for all the wrong reasons over the summer and it carried on into the new season. After postponing several games and going down to [literally] the last hour before finding a saviour, the Trotters must now try to salvage their season after beginning on -12 points. It's not looking good but Keith Hill's squad picked up their first two points with draws in their most recent outings.

Bridcutt's signing could prove to be vital. Cast out of contention at Nottingham Forest, he's on loan with the Trotters until January. Despite recent struggles, he has the quality to help Bolton in the third tier. After starting well at the Macron Stadium, it looks like he has a point to prove.

Johnson's experience makes him critical to Rovers' success. He's played for a host of teams, mainly in the Championship, but left Derby in the summer on a free transfer following the Rams' playoff final heartache. Now 32, he still plays a big role. In his seven starts, Bradley Dack has miraculously found more time and space to express himself.

The two midfielders will push Rovers in what could be a hopeful season at Ewood Park.

For me, Coppinger must be one of the first names on this teamsheet. He has scored twice this season in League One, nothing special, but will forever go down in Doncaster folk law. After joining the club in 2004, he's spent 16 years with Donny. Never a prolific scorer, he has come up with some huge goals in his time. He is the only Doncaster player with 500 caps

Although he now plays a minor role, he is Doncaster through and through. A man who could fit into many XI lists and certainly deserves his place in this one.

Rovers top scorer has six in ten matches. His continued success is crucial to the Gas. Only Peterborough’s Ivan Toney stands above him in the charts. Clarke-Harris scored 16 last year for both Coventry and Rovers. Several Championship clubs are linked to the star. Whether he stays or goes in January will have a huge impact on the campaign.

In 2019, managers rarely get the luxury of time. Ainsworth was a rare exception and the board's patience paid off for the Chairboys. Few Football League bosses can match his seven years at Adams Park.

Ainsworth took over in 2012 with the club just relegated to League Two. He stayed despite many ups and downs including the disappointment of playoff defeat and a near relegation to non-league football. Manager and club were rewarded with promotion in 2017/18. Then he remained in place despite another relegation battle that went to the wire in 2018/19.  A goal behind Coventry for the second automatic promotion place, the club's faith in their man is being validated.

Wycombe Wanderers
wwfcofficial
Follow
#BeanWithTheShot returns this Tuesday... and it's a special tribute edition to this man on his seventh anniversary in charge.