For the majority, the curtain has come down on the 2018/19 Football League season. However, the show goes on for a few select clubs. Mansfield Town, Newport County, Forest Green Rovers and Tranmere Rovers all look to progress in the League Two playoffs, destination Wembley for a chance at promotion to League One. Excitement, tension, drama, dejection and glory await.

Football League playoffs consist of two semi-finals, both played over two legs with the higher placed team playing at home in the second leg. The two winners then face off at Wembley to secure promotion. Here's a peek at the playoff picture in EFL League Two.

The first League Two play-off sees Mansfield Town face Newport County. Mansfield already survived a playoff experience of their own. Last weekend, they lost 1-0 away against MK Dons in a straight shoot-out to win automatic promotion. David Flitcroft’s Stags must pick themselves up quickly for the playoff lottery.

Newport enter the playoffs as League Two’s surprise package. When Michael Flynn was appointed Exiles manager in March 2017, he was their third manager of the campaign. Flynn led the club to survival. Since then, it has been onwards and upwards. Last term brought an 11th-place finish. In 2018/19, the Welsh side secured a playoff finish on a modest budget even by League Two standards. The Exiles rode as high as second this season until their league form temporarily dipped during an impressive FA Cup run that required extinguishing from no less than Manchester City. Despite their talent-steeped roster, Pep Guardiola's Premier League champions still required more help from Lady Luck than seems fair.

Mansfield will go into the tie as favourites but enter on the back of three straight defeats. Not ideal. Newport will compete in a more relaxed fashion, confident they can continue punching above their weight. Unbeaten in ten league games, their momentum is the perfect way to approach playoff football.

The other playoff fixture is a Rover-palooza between Forest Green and Tranmere. The former chase their second promotion in three seasons. They made headlines off-the-pitch by becoming the first all-vegan club. On the pitch, they are leaving fellow teams green with envy. Star striker Christian Doidge is feared at this level. On August's transfer deadline day, Doidge was signed by Championship outfit Bolton Wanderers on loan with an option to buy in January. However, the financial chaos at the Lancashire outfit meant the deal could not be made permanent. The striker subsequently returned to Forest Green. With 10 goals in 20 games since, it feels like he was never gone.

Tranmere seek a second straight promotion following their first season back in the Football League. The Wirral-based outfit comfortably adjusted to League Two after promotion, never dropping below 14th. Like Doidge at Forest Green, Tranmere boast a feared striker. James Norwood enjoyed his fourth season at the Wirral club, his most prolific. Following Andy Cook's preseason departure for Walsall, the 28-year-old weighed in with an impressive 28 goals in 44 games to spark Tranmere's promotion hopes.

neither side is a stranger to playoff football. Rovers won the last two National League Playoff Finals. They've even met in the postseason previously. Forest Green took the 2017/18 National League final 3-1 over Tranmere. Payback will be the order of the day for the blue-clad Rovers.

That said, Forest Green enter the tie on five wins from their last eight compared to Tranmere's two. One victory came at Tranmere's expense when Junior Modal scored two minutes into the second half away at Prenton Park. 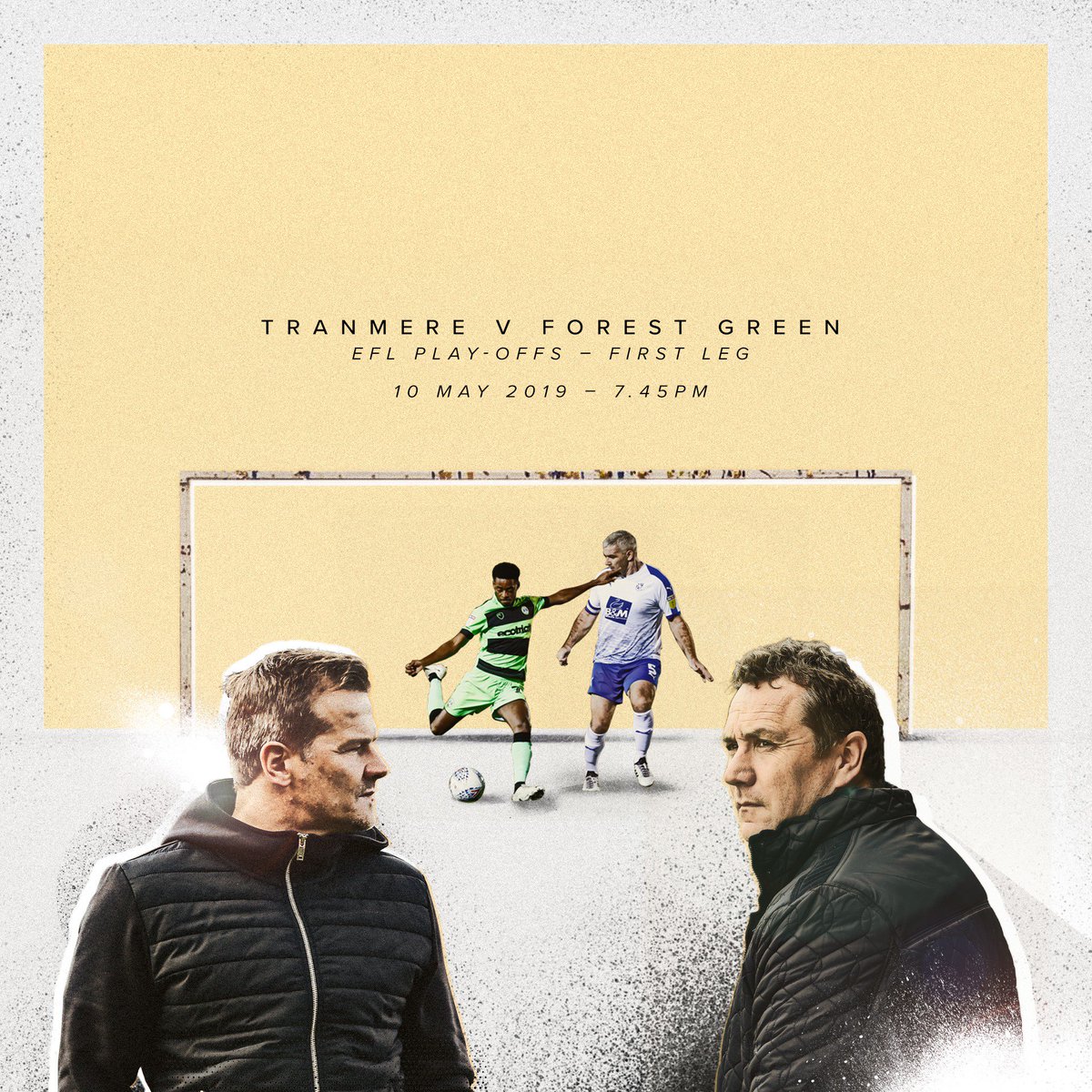 We will announce full details on tickets and how to secure yours both home and away tomorrow.

Expect Mansfield and Forest Green to book passage to Wembley. In the head-to-head games between those two this term, Mansfield claim the superior record. Forest Green enter the playoffs in much better form but Mansfield boast the strongest attack and stingiest defence among the four participants. Based on that, the Stags should be playing in League One in 2019/20