Can James McCarthy resurrect his career at Crystal Palace?

James McCarthy joined Crystal Palace 11 days ago for £3 million. It brought an end to the central midfielder’s six-year spell at Everton. Having fallen off the Premier League radar in recent times, he now aims to revive his career at Selhurst Park.

McCarthy began his footballing journey at Hamilton Academical. He made 110 competitive appearances for the Scottish side before switching to Wigan Athletic. From there, the Glasgow-born’s status rose, turning out 115 times in England’s top flight, scoring seven goals. His most significant achievement was helping the Latics claim a shock FA Cup triumph in 2013. Performing at such a consistent, high level alerted a few bigger outfits.

Viewed as a necessary step up, McCarthy arrived at Everton for £13 million, making him the club’s then-second most expensive signing ever. In his first three seasons, he was given a key part, racking up 91 games. Things soon turned. Separate groin, hamstring, and knee injuries meant he missed more matches than he played the following two campaigns.

Things only got worse. A broken leg sustained in January 2018 kept McCarthy sidelined for almost a whole year. Once returning, he made just a single appearance, coming on as a substitute during April’s victory over Manchester United. Marco Silva’s preference for others was obvious. Idrissa Gueye and Andre Gomes were the trusted ones. Although Gueye has left, the Toffees’ options have since been bolstered by bringing in Fabian Delph in addition to Jean-Philippe Gbamin.

That left no room for McCarthy. Consequently, he’s sought a fresh start at Palace searching to reclaim his former heights. 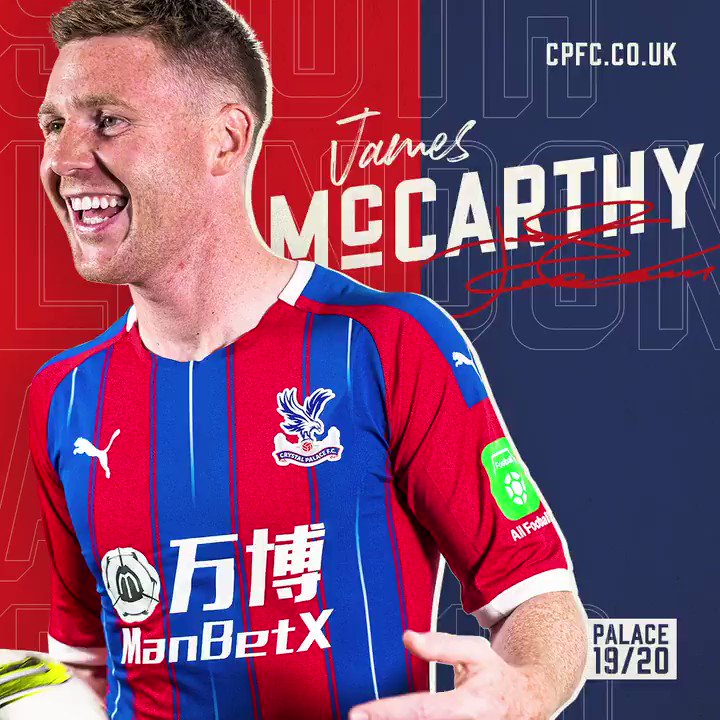 Like at Everton, McCarthy faces stiff competition for a starting place. Crystal Palace’s James McArthur, Luka Milivojevic, and Cheikhou Kouyate will all expect a prominent part.

McArthur appeared in all 38 league matches last season. The Scot’s all-round ability, putting himself about to break up attacks, shielding the ball, and chipping in with goals is valuable to his team’s system.

Milivojevic didn’t miss a game, either. As captain and protector, the Serb uses tackling, intercepting capability to good effect. His shooting expertise, including penalty taking, enabled him to score 12 goals in 2018/19. No other Eagles player recorded more.

Roy Hodgson’s alternative, Kouyate started 21 contests last campaign. The Senegalese is a strong defensive presence who’s adept at sniffing out danger. Such resolve is needed in a bottom-half side.

Palace began their season with a 0-0 at home to Everton last Saturday. A decent result but not one to suggest they’ll greatly improve on last term’s 12th-place finish. McArthur and Milivojevic both played the full 90 minutes. McCarthy remained on the bench.

Next up for Hodgson’s men is today’s away encounter at newly-promoted Sheffield United. That should give a clearer indication of their current standing. As things look, avoiding relegation is the target, anything better a bonus. Holding on to Wilfried Zaha could prove the difference between those two fates.

McCarthy’s role, once making his bow, is to contribute both defensively and in attack, using dogged determination along with passing range to complete the job. He’ll add a little flair to the Eagles’ mostly workmanlike midfield.

Good performance is likely to benefit McCarthy beyond South London. Although born in Scotland, he’s a 41-time capped Republic of Ireland international. Current gaffer Mick McCarthy went to watch him in a U23 game on Monday. Afterward, the 60-year-old said, ‘I’ve kept in touch with James over the summer and look forward to seeing him back in the international squad.’

For now, James McCarthy must concentrate on matters at Palace. Earning a major role will be a gradual process considering his lack of action. To displace either McArthur or Milivojevic, the 28-year-old needs to find peak form whenever given an opportunity. Otherwise, he’ll do little more than warm the bench.