Jose Mourinho is divisive to the core. His managerial style is reactive rather than proactive. If you need a storm in a teacup, don't hire Mourinho. He'll give you a tsunami in a teaspoon. Nevertheless, he’s not just what Arsenal wants; he’s exactly the man they need to extricate the Gunners from their self-dug hole. Again, Mourinho is divisive. Some of you can't believe what you're reading but the facts make a strong case.

If the beautiful game were a cafeteria, crow would dominate the menu. Players and managers are wont to make U-turns, eat their words and earn salaries from clubs they once ridiculed and loathed. Chelsea fans couldn't believe their board installed Liverpool legend Rafael Benitez in the Stamford Bridge dugout. Their outrage wasn't fuelled by his work for the Reds, rather comments he made about the Blues during his time at Anfield.

No one trumps Mourinho when it comes to derisive quotes. In his seven years as a Premier League manager, you can fill a book with barbs directed at Arsenal and its personnel. You'd probably title it 'Voyeur'. Still, there are no permanent enemies among professionals.

The Special One's suitability as Arsenal boss splits the fanbase down the middle. It wouldn’t surprise to hear the 56-year-old  booed by large sections of the Arsenal support if he eventually gets the job. They’ll come around once he starts delivering results. And make no mistake. He will.

Why Mourinho is needed

The Portuguese remains among the most successful gaffers ever to grace the English game even if Pep Guardiola matched his three-season haul to begin his Premier League career.

The Spaniard failed to get Arsenal into the Champions League in his first season and isn’t looking like he can make it happen this term. In addition, his reputation as a Europa League specialist took a hit when Maurizio Sarri and Chelsea thoroughly dismantled the Gunners in Azerbaijan.

Arsenal's biggest weakness, however, might be their reluctance to sack managers. They stuck with Wenger through seven barren years and were then satisfied with three FA Cups even as the side fell out of Champions League contention. Until they make a move, a sizable portion of supporters don't believe they'll sack Emery. Money spent might be the difference, however. Chairman Stan Kroenke sanctioned the £72 million to acquire Nicolas Pepe from Lille only to see no return on his investment. Meanwhile, the Gunners rearguard continues to fall asleep in packed stadiums.

If Arsenal are willing to splash the cash, they need a manager who can do something with it. 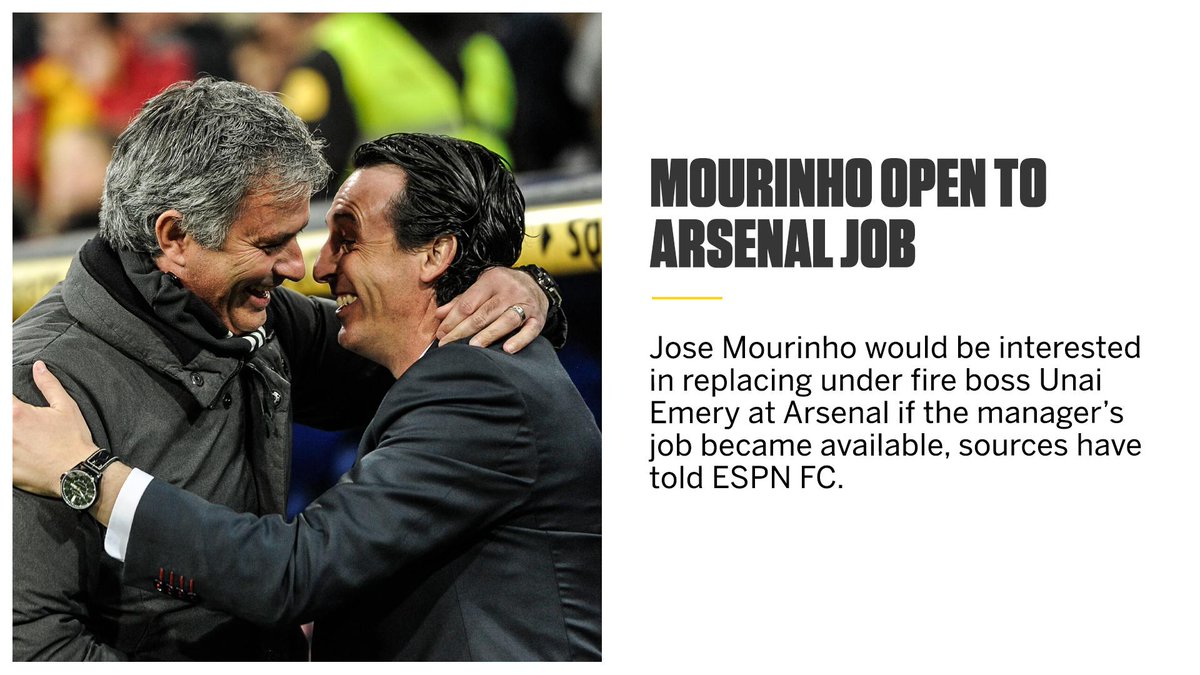 Mourinho always hits the stratosphere within the first two years of moving to any new club. It’s a record that’s trailed him even to his most recent employment at Old Trafford. In those two years, he won domestic and international trophies. In year three, his players revolted.

Arsenal is a club where the manager is given as much freedom as possible to express himself and install his philosophy. It’s hard to think of a better environment where Mourinho can thrive. Mou’s winning mentality means he won’t leave the Emirates without winning some trophies.

History suggests he's a short-term solution but Arsenal desperately need a shock to the system. They shouldn’t be too bothered whether Mourinho can survive his third year on the job.

What about the youngsters?

It’s argued Mourinho doesn’t give youth a chance. Many fear his appointment will truncate the bourgeoning careers of prospects like Gabriel Martinelli, Bukayo Saka and Reiss Nelson. The argument is pretty much unfounded.

In his own defence, Mourinho released a list of 55 players who popped their professional football cherry under his tutelage. The Guardian audited the list. By their standards, Mourinho handed professional debuts to 34 players. While they rejected some who were merely unused substitutes in his squads, others such as Casemiro and Jon Obi Mikel failed to win approval because they had played for clubs outside Europe's top leagues, Casemiro in his native Brazil, Obi Mikel in Norway. However you cut it, Mourinho has taken chances on a significant number of young and untested players.

That said, Stan Kroenke should make certain the Portuguese signs a pre-nup.

Canadian rockers The Tragically Hip recorded a song called Boots and Hearts, noting that the two items had something in common. When it starts to fall apart, Man, it really falls…