FA Cup First Round: Which minnows will shock this weekend?

One of the biggest days on the lower league football calendar is here: the FA Cup first round. The long, gruelling qualifying rounds are over. The question now is which sides will steal headlines over the next few days? Twenty-two non-league sides remain among the 40 ties scheduled. Plenty of chances for shock and surprise.

For the smallest sides still in the competition, one match on TV or one away game in front of a huge crowd can change their financial prospects for the better.

Minnows in the pond

Haringey Borough play in the Bostik Premier Division. The Borough overcame fellow minnows Poole Town to reach this stage. Their reward is to host former winners and current League One club, AFC Wimbledon, in a match to be shown live on the BBC.

Hitchin Town also overcame a fellow seventh-tier side in the final qualifying round but their home tie isn't the money-spinner of which they dreamed.  They host National Premier side Solihull Moors. At worst, their chance to progress is greater than Haringey's. That being said, Moors sit in the playoff places in non-league's top flight. Tim Flowers team present a stern test for Mark Burke's Canaries.

The final step seven side still alive and kicking is the Metropolitan Police, no strangers to the first round. They host League Two Newport County, sixth in that division.

Including Hitchin v Solihull Moors there are a total of six all non-league ties in the first round. When all is said and done for the weekend, several will still be here.

One sixth-tier club is guaranteed a second round place as National League South sides Torquay United and Woking go head-to-head. 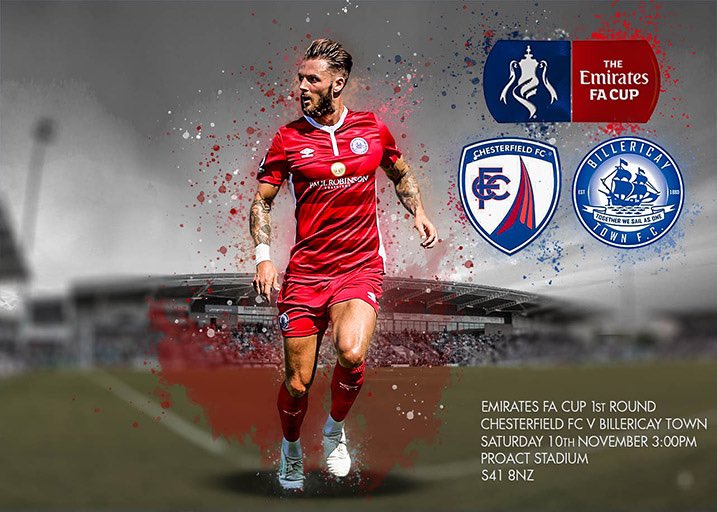 Billericay Town FC
BTFC
Follow
NEXT UP | @EmiratesFACup 1st Rd action Saturday as we head to @TheNationalLge side @ChesterfieldFC
Tickets on sale from the club shop until 5pm Friday
AWAY TRAVEL - only a few spaces remain on the last coach, don't miss out book your seat by contacting @BTSS_AwayTravel now💙 https://t.co/pygRBZr6P5
Follow
08:12 AM - 8th Nov 18
13
32

Third place in the National League, Salford City are always going to have the potential to produce shocks considering the squad gaffer Graham Alexander has at his disposal. The Ammies go to League One Shrewsbury, who are struggling in 18th place and surely won’t be looking forward to the prospect of facing Adam Rooney and co.

National League National leaders Chorley host League One Doncaster. Up until two weeks ago, the non-leaguers remained unbeaten. Now they've lost three on the trot. Their confidence may have gone and, Captain Obvious, it could have a huge effect on their chances.

The first round also marks the start for many fallen giants now further down the leagues.

Sunderland were probably first to pop into your head. The Black Cats have the run of life in League One, sitting second after their back-to-back relegations. Their FA Cup campaign starts with a trip to League Two Port Vale on BT Sport.

The final game on TV this weekend is another former Cup winner, Portsmouth. Pompey are now used to competing in the early rounds. This time, they travel to National League Maidenhead United.

There are always going to be surprises in the first round. It happens every year. On paper this year, fewer stand out as potential shocks. Then again, a shock is something you don't see coming.