FA Cup First Round: Where will the shocks come?

The FA Cup First Round draw is always a date to circle on the English football calendar. Once again, it didn't disappoint. The draw took place two weeks ago, setting the stage for the drama to unfold this weekend. League One and League Two sides enter the competition, upping the stakes for the non-league sides who have reached this stage.

Two sides remain from the eighth tier. When Bury were expelled from the EFL, an odd number of teams remained, mandating a bye for the ball not plucked from the pot. Lowest-ranked, Chichester City turned out to be in the wrong place at the right time. The Lilywhites proceed directly to Round Two and collect £36,000. In a fantastic gesture, the West Sussex club pledged a donation to Bury.

Maldon and Tiptree are the other step eight side still in the competition after winning 1-0 away to seventh tier Royston Town in the previous round. The Jammers travel to Leyton Orient who returned to the Football League last season. Maldon already find themselves several rounds deep into new territory. Can they continue to write history?

Chichester City FC
ChiCityFC
Follow
The club would like to place on record that we will be making a donation to the appropriate organisation involved with the continuation of @buryfcofficial.

Someone had to get the bye, maybe after 6 wins already we deserved it?

Four ties have been picked for live coverage across BBC and BT Sport starting on Friday night. Each pits a non-league side at home to an EFL club.

This was always going to be a TV game. Harrogate fly high in the National League after reaching the playoffs in their first season at that level last year. Portsmouth struggle for traction in 2019/20 after playoff heartache last year. Harrogate striker Mark Beck is proving a handful for opponents. Pompy defenders must corral him.

South London-based Dulwich Hamlet play in the National South but attract comparatively large crowds for that level, averaging 1,900 at Champion Hill. Fifteenth in the table after a home defeat to Bath at the weekend, the Hamlet survived three ties to reach this stage. Carlisle United are 19th in League Two but picked up a confidence-boosting victory at home to Macclesfield Town on Saturday.

National League Dover fancy their chances against struggling Southend United. The two South Coast teams face off with Dover mid-table in non-league's top flight while Southend nestle second-bottom in League One with a meagre five points from 16 games. The Shrimpers own two wins in all competition and seven defeats in their last eight. It's an understatement to say new boss Sol Campbell's side is vulnerable.

Eighteenth in the Southern League South, Hayes and Yeading are one of the lowest-ranked sides still in the competition. In part, their league woes are down to playing far fewer games thanks to their cup run. Progressing represents a challenge. Until now, the Beaconsfield Road denizens faced players from the same or lower levels. Oxford are League One's surprise this season, sitting fourth. The division's second-top scorers, hayes and Yeading's defence must adopt a siege mentality for this one.

Harrogate Town AFC
HarrogateTown
Follow
🏆 | We will welcome @Pompey to @TheCNGStadium in the #EmiratesFACup First Round
Follow
19:18 PM - 21st Oct 19
60
429

Aside from Hayes and Yeading, four sides from the seventh tier. Three drew other non-league sides. One wasn't so lucky.

Stourbridge hail from the Southern League Central division. The Glassboys haven’t lost a game since mid-September and only twice this season in all competitions. Can they continue the run against National Premier outfit, Eastleigh? The Spitfires won't be pushovers. They lie mid-table in the National League after beating promotion chasers Harrogate on Saturday.

Northern Premier League side Nantwich already caused two shocks and seek a third before the home fans at Weaver Stadium. The Dabbers knocked out Telford and King’s Lynn Town from the National North, one division higher. Big spenders Fylde were one step away from the Football League in May but lost the National League playoff final to Salford City. The Coasters were expected to challenge for promotion again this season, but are fifth-bottom, leading to long-time boss Dave Challinor's sack. The question is whether they're easy pickings or will play like a cornered beast for new boss Jim Bentley?

League Two’s Macclesfield Town will be hoping to avoid a shock when they host Kingstonian. The Silkmen are 15th in League Two despite their struggles away from the pitch. With only one side due to go down after the Bury debacle, they should be comfortable this season. Kingstonian inhabit the Isthmian League's lower reaches but shocked National South Dartford 3-2 in the final qualifying round.

Carshalton play in the same division as Kinsgtonian but are currently eighth. Like their division rivals, they produced a shock in the last round, ousting the National League's Dagenham and Redbridge. The Robins last reached this stage of the competition in 1998 when they lost to Stevenage Borough. National North's Boston United jostle in the crowd just outside the playoff places. Both sides enter the match unbeaten in nine. Here's hoping respect doesn't spoil a promising affair. 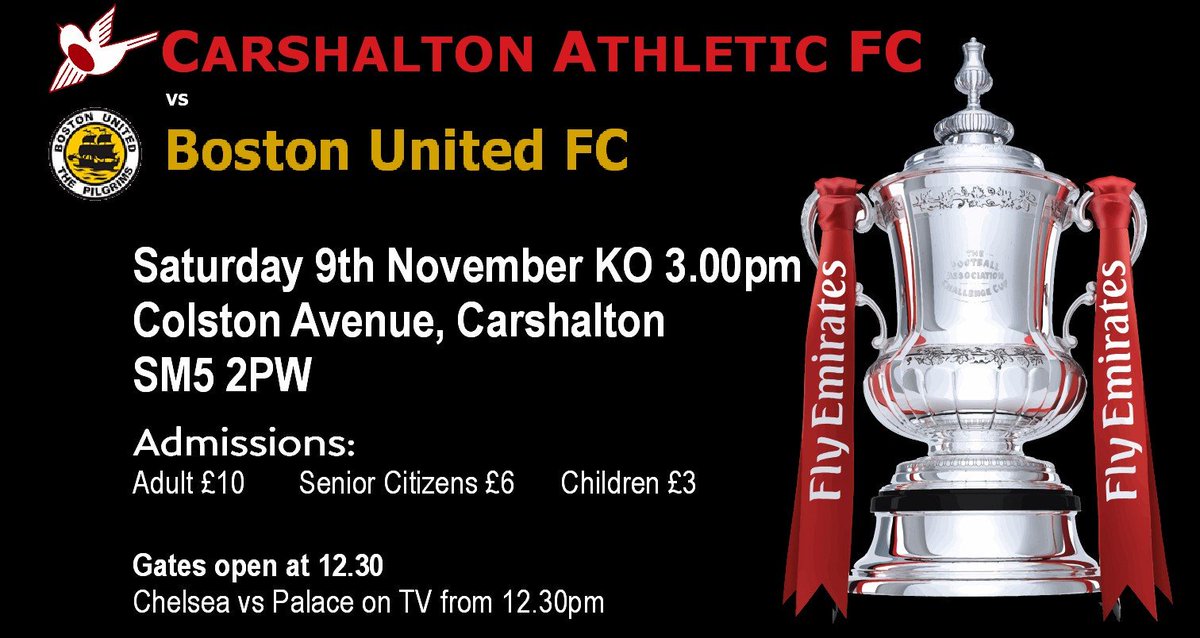 Other all non-league ties

With 32 non-league teams in the competition and several drawn against each other, a handful will join Chichester in the Second Round. At least one National League North club will advance after York City and Altrincham face off.  The Minstermen continued their fantastic start to the season in the last round, knocking out National Premier side Stockport County in front of the BT Sport cameras. Elsewhere Oxford City host Solihull Moors, Maidstone United play Torquay United, Ebbsfleet United take on Notts County and Yeovil Town face Hartlepool United.

First out of the hat were Ipswich town. Several smaller sides would have loved that tie but fellow League One denizen Lincoln City drew the chance. Non-leaguers looking for a payday were disappointed again when Gillingham drew a trip to the Stadium of Light to cross Sunderland's path.

Always one of the biggest weekends in UK football, the First Round will be no different this year. It all gets underway when Dulwich Hamlet host Carlisle United tonight. Enjoy.

Leave a comment
Latest Fa Cup Articles
FA Cup 2nd Round: Which Non-league minnows can make the 3rd round?
By Simon Hahn

FA Cup Fourth Qualifying round: Who will make the first round draw?
By Simon Hahn

It is the final qualifying round of the 2019/20 FA Cup. This weekend could change everything for some of the clubs in the competition. The 24 National League clubs join the 40 teams…