FA Cup Fourth Qualifying round: Who will make the first round draw?

It is the final qualifying round of the 2019/20 FA Cup. This weekend could change everything for some of the clubs in the competition. The 24 National League clubs join the 40 teams that progressed from the previous round. Thirty-two spots are up for grabs to compete against League One and Two sides. The final three teams from the ninth tier were knocked out in the last round. The five from the eighth level are now the lowest-ranked sides.

Colne battled to win out against fellow eighth-level club Dunston in the last round. They revisit Tyne and Wear to take on National League North side Gateshead. Colne are in the bottom half of the Northern Premier League Division One North West while Gateshead are ninth in their division but this is largely down to the number of games Colne have played due to their success in the cup.

The Heed made a decent start to the season following demotion from the National Premier last season. All eyes will be on Colne but Gateshead will view this as a fantastic opportunity, having won six of their last seven in all competitions and posting a near-perfect record at home. Former Newcastle defender Mike Williamson is the player/manager at Gateshead. His no-nonsense defending has certainly rubbed off on them.

Belper Town received one of the glamour ties of the round. Notts County fell out of the Football League for the first time in their history earlier this year. After a poor start to the season, the Magpies picked up in recent weeks, winning five of their last seven and jumping up to fifth.

Belper will go to Meadow Lane to enjoy the day and if they can take something, it would cap a fantastic run in this year's competition. They're eighth in the  Northern Premier League South East division. Similar to Colne, their league position would be higher but for their cup run. The Nailers have only played six league games so far and remain unbeaten.

Whytleafe overcame another minnow, ninth tier Abbey Rangers, in the last round. They'll fancy their chances of making the first round with a home draw.  The Leafe reached the First Round in 1999. Matching that feat will be a huge achievement for the Surrey club. With cup runs in various competitions, Whytleafe have managed only four league game this season despite being two and a half months into the Isthmian League South East Division campaign.

Chippenham are mid table in the National South, having had to come through replays in both of their FA Cup ties so far.

Maldon and Tiptree are top of the Isthmian League North Division. They should be pleased with their draw away to Royston Town who operate one league higher. They are another team entering new territory with this cup run. Royston are tenth in the Southern League Central division and the game provides a great opportunity for both clubs.

As far as either side has ever progressed in the tournament, these two clubs are enjoying the rarefied atmosphere. Chichester already knocked out two step-seven sides and will be looking to make it three in a row. In the last round, Bowers and Pitsea only came through after a penalty shootout against Canvey Island. They have really struggled in the league this season sitting third bottom of the Isthmian League Premier division.

All the step-eight sides fancy their chances but Chichester, along with Maldon and Tiptree, drew excellent chances to advance to the First Round.

Maldon & Tiptree FC
MaldonTiptreeFC
Follow
WHAT. A. TEAM!!!!! Today club history was made as we go through to the 4th Qualifying round of the FA Cup after our 6-1 win against @TheCurfews. Fantastic from every single one of the lads and brilliant support again! #Jammers 🍓🍓🍓🍓🍓🍓🍓🍓
Follow
17:00 PM - 5th Oct 19
6
85

At least four teams from step-seven or lower will make the first round from the above ties. Two more will progress from this quartet.

From the Northern Premier League. Whitby Town are off to a good start despite an FA Cup run's distraction. They host Stourbridge from the Southern Central League. Whitby are seventh in their division but hold games in hand on all the sides above. The Seasiders knocked out National North side Gloucester after a replay in a game that, due to injury, saw them name three goalkeepers in a 14 man squad. What else would you expect from a club who reached the Second Round on two occasions?

Stourbridge lie fourth in their league. In 2017, the Glassboys reached the Third Round before falling to Wycombe Wanderers 1-0.

Hayes and Yeading struggle so far this season, lying 16th in the Southern League South division. Division rivals Poole are third, having lost once in all competitions so far.  Hayes and Yeading are a relatively new club following the merger of two teams in 2007. They reached the First Round in 2010/11. Poole made the Third proper all the way back in 1926. Here's an opportunity to chase history.

The Lambs are in their second season in the seventh tier following relegation from the National North. Tamworth already dispatched a team from a higher tier, knocking out Hereford on penalties following two nil-nil draws in the fourth qualifying round. They've also started the league campaign well, sitting in seventh in the Southern Central League. Darlington are from the same division as Hereford albeit in the bottom half of the table. Tamworth will see this as a great opportunity, yet so will the Quakers who have turned a corner after winning their last four games in all competitions.

These two teams met in the National North playoff final last season with Chorley coming out on top on penalties but they've struggled since their promotion. Chorley languish in the relegation zone, second-bottom. Meanwhile, the Brewers haven't started well but have won their last four, including a 6-2 result at Ashton United in the previous round. Top scorer Glen Taylor scored four.

Among the entire round of fixtures, this one stands out. Potters Bar are a minnow at this stage of the competition hosting Barnet, a regular in the fourth tier. Barnet are tenth in the National Premier, but have only won one of their last seven games. Potters Bar meanwhile come into the game unbeaten in nine. 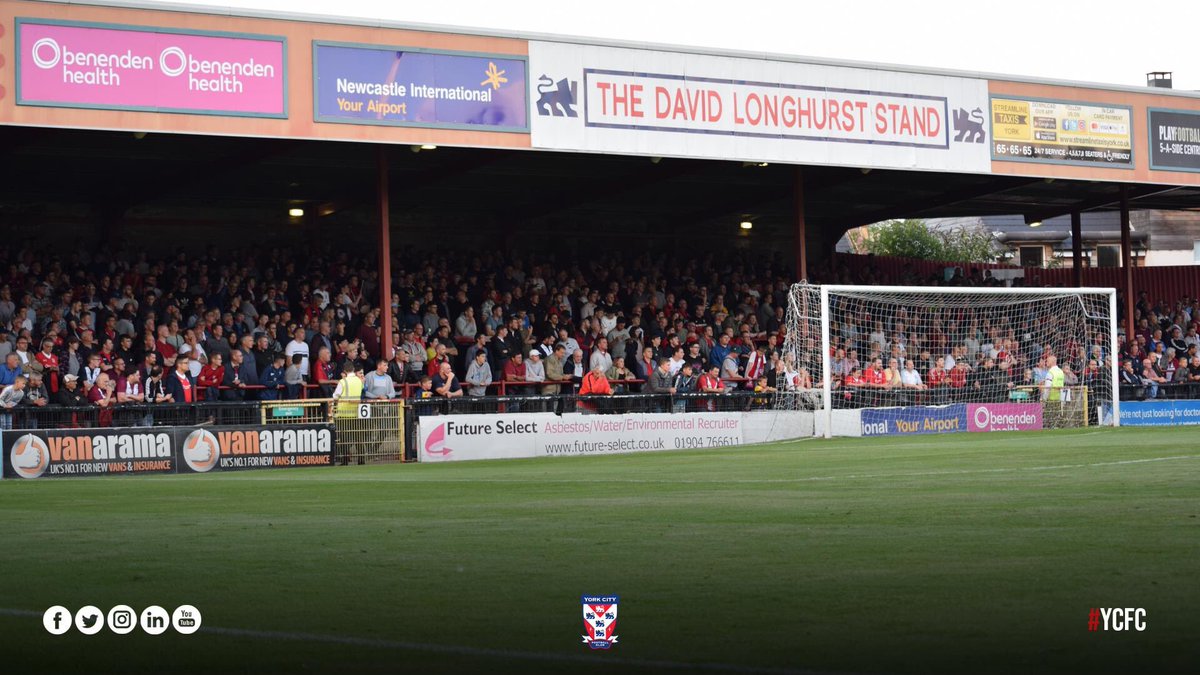 York City FC
YorkCityFC
Follow
📺 BREAKING: Our 4th Qualifying Round tie against Stockport County on Saturday 19th October will be televised live on BT Sport, KO will be 5.20pm.

Live on BT Sport, two major non-league clubs go head-to-head with a shock certainly possible. York and Stockport once occupied their trade much higher up the football pyramid. Stockport won the National North last season, but have struggled so far in the top flight of non-league football. York, under Steve Watson, hope to follow in their footsteps and started this season showing they mean business. They top the National North, three points clear, and remain unbeaten in all competitions. There'll be a raucous crowd inside the famous Bootham Crescent, a venue which could see its final FA Cup tie. York are due to move to a new community stadium during this campaign.

Six ties have pitted half of the National League teams against each other.

It is a huge weekend for many in the competition with victory guaranteeing a place in the First Round draw. It opens up possibilities such as travelling to former giants of the game, playing before big crowds, being watched by large television audiences and winning crucial prize money. The fourth round qualifying draw has been kind to many of the lower league sides still in the competition. Who will take advantage?

Leave a comment
Latest Fa Cup Articles
FA Cup 2nd Round: Which Non-league minnows can make the 3rd round?
By Simon Hahn

FA Cup First Round: Where will the shocks come?
By Simon Hahn

The FA Cup First Round draw is always a date to circle on the English football calendar. Once again, it didn't disappoint. The draw took place two weeks ago, setting the stage…