FA Cup Fourth Round, which teams can spring a cup upset?

The FA Cup takes centre stage again this weekend, but can any of the minnows left in the competition reach the last 16?  At this round last year, only three sides outside the top two divisions were able to progress, but can any of them go one step further this campaign?

Non-league Barnet are the only side remaining outside the Football League and will be looking to provide another shock when they host Championship Brentford in front of the BT Sport cameras. Despite having a mediocre season domestically, they have now won four games in the cup including winning 1-0 at Sheffield United in the third round. Barnet have also announced this week a change in head coach with Darren Currie coming into the hot seat; which could be a huge lift for them.

Two League Two sides still have a chance at making the last 16 this weekend. Newport County caused one of the biggest shocks of the third round as they won a dramatic game at Rodney Parade 2-1 against Premier League Leicester City. They travel to Championship play-off hopefuls Middlesbrough, who have gone off the boil in the last couple of months to halt their automatic promotion hopes. In particular, they have struggled at the Riverside so County may fancy their chances of claiming a scalp while on the road...

The other fourth-tier side still in this year’s competition are Oldham Athletic. They also produced a dramatic victory against Premier League opposition in the last round as they won 2-1 at Fulham thanks to two late goals. They go to League One Doncaster Rovers meaning at least one side from outside the top two divisions will make Round 5. Donny produced a surprise of their own in Round 3 with a 3-1 victory at Championship Preston North End. 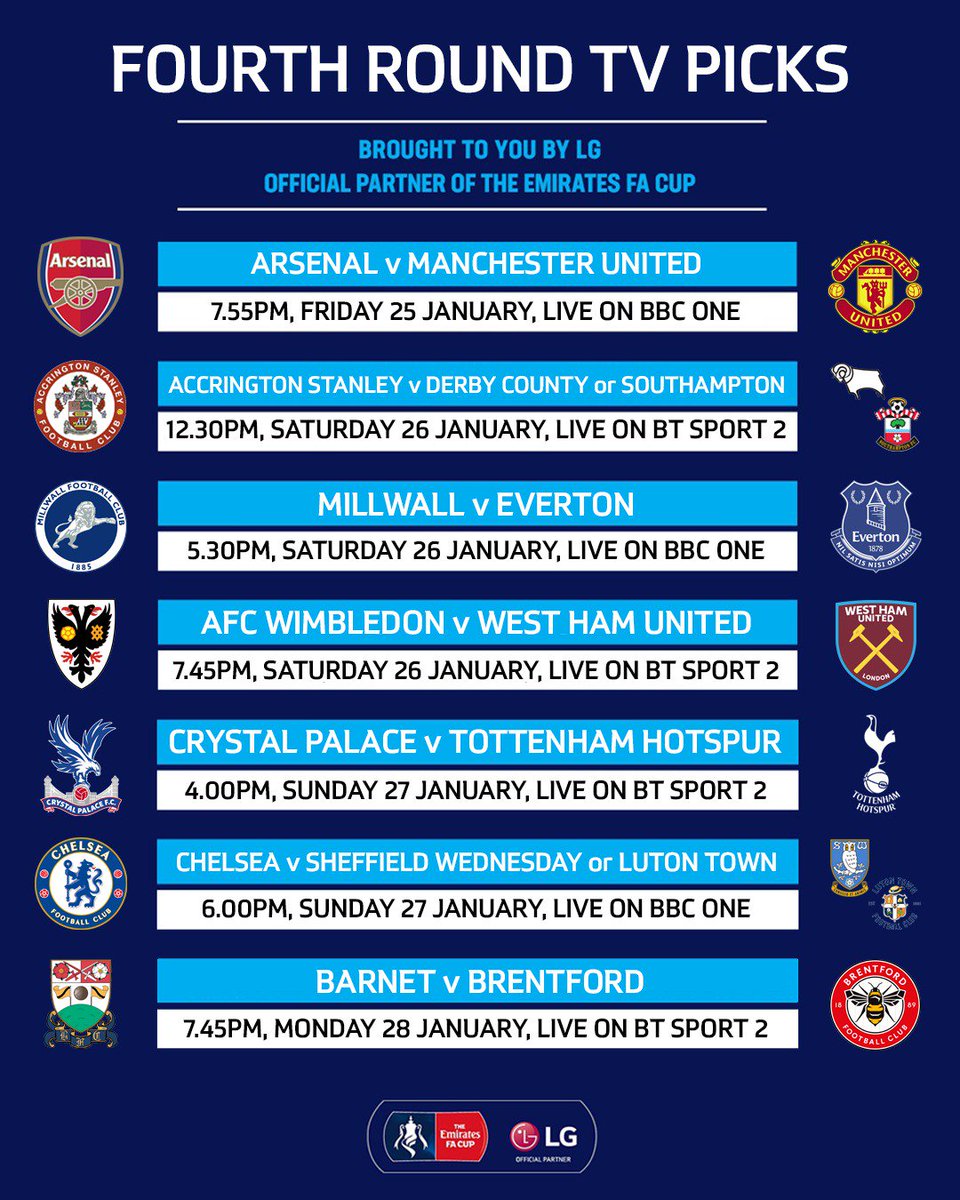 On top of Doncaster, a further five League One sides remain in the competition. AFC Wimbledon sits bottom of the table and will need a minor miracle to stay up between now and May. However, the FA Cup is providing a welcome distraction for them. They have a money-spinning TV tie with West Ham to look forward to, and while a shock is unlikely, the day will be a highlight of what has otherwise been a season of struggle.

Accrington Stanley are certainly a club on the up in recent years and they host Frank Lampard’s Derby County. Likewise, Portsmouth are looking up following recent difficult times. Right now, they are riding high atop League One and will have no fear of mid-table Championship side QPR. This is one I would highlight for a potential cupset.

Shrewsbury are in the bottom half of League One and face Wolves, who have started to pick up momentum again since the turn of the year. The hosts secured an impressive 3-2 win at Stoke City in the last round, but that was their only win in eight games across all competitions.

Gillingham are one place below Shrewsbury near the bottom of League One and they travel to Wales to take on Swansea City. The Gills were another to provide a third round shock against a Premier League side as they beat Cardiff 1-0. After an up and down season, Swansea appear to have turned a corner and are not too far off the top six so have hopes of an immediate return to the Premier League so thoughts may be elsewhere at the weekend.

There are four all-Premier League ties with one obviously standing out. Old rivals Arsenal and Manchester United go head to head at the Emirates and while both are likely to rest players for the Friday night fixture, it will be interesting none the less. Ole Gunnar Solskjaer will surely be keen on keeping up his 100% record since being in the United hot seat, while this is a big chance for Unai Emery to claim a trophy in his first season in English football.

A London derby between Palace and Spurs is another to be featured on TV, but with Tottenham’s recent injury problems I expect them to ring the changes. Watford will fancy their chances against a Newcastle side who, despite being desperate for a trophy, will be concentrating on Premier League survival. Whilst Burnley will not be looking forward to their trip to the Etihad whatever side the hosts put out.

Barnet, Oldham and Newport have produced results in the last round that fans will remember for a long time and all will have the confidence that they could do it again. Several of the League One sides will also have strong hopes of progressing, but I suspect whatever the drama all eyes will still be on one game this weekend; the first of the fourth round ties in London on Friday night.