By Andrew Dowdeswell
British Football England National Team Fa Cup Fifth Round Huddersfeld Town Lincoln City Millwall Sean Raggett Shaun Cummings Slider Articles Underdog
The FA Cup fifth round Saturday was the reason the competition exists. It was exciting, enthralling and wholly unpredictable. It was Underdog Day.
Unlike the Bill Murray movie in which the title has become synonymous with repeated toils, Saturday was no Groundhog Day for the FA Cup. Saturday was Underdog Day, and oh what a day it was.

After Lincoln City's 1-0 win over Burnley, two sides with 81 places between them, late goal scorer Sean Raggett, who steered a header past the outstretched Tom Heaton in added time, stated: “That was mental. We didn't come here for the occasion; we came to win the game.”

Lincoln are the first Non-League side to reach the FA Cup quarter-finals for 103 years and will now be dreaming of a match against the big boys and maybe, just maybe, of a trip to Wembley. 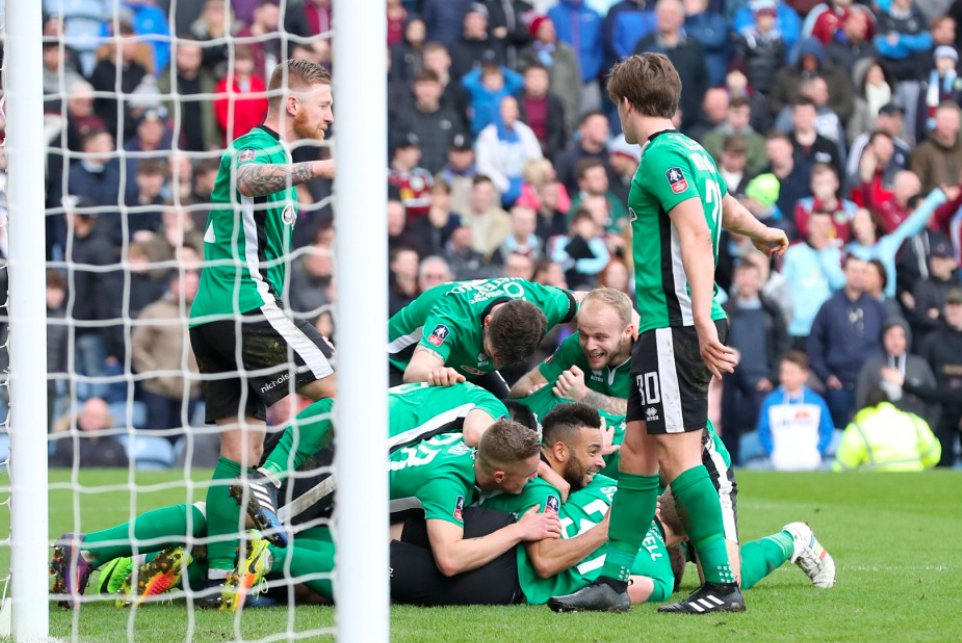 Telegraph Football
TeleFootball
Follow
Lincoln City become the first non-league team to reach the quarter-finals of the #FACup since 1914
https://t.co/fBBIBXypUM https://t.co/659rwuvV8w
Follow
14:30 PM - 18th Feb 17
116
78
Soon after Lincoln's miraculous win at Turf Moor, 184 miles further south, the biggest crowd at the Den in 16 years - 18, 012 to be precise - welcomed a struggling Leicester City side. A Jake Cooper red card for two bookable offences after scything down Ahmed Musa changed the game, but not as the Foxes would have hoped.

It was Shaun Cummings, the Millwall full-back, who piled on the misery for Claudio Ranieri with a curled finish late in the game, adding yet another Premier League scalp to their FA Cup run after wins against Watford and Bournemouth.

Meanwhile, Manchester City were held by David Wagner's Huddersfield. The Championship club were resolute and resilient, brave in their pressing and brimming in their celebrations. The great many blessings of the Citizens were held to nothing by a West Yorkshire, miners town. Oh how the FA Cup continues to shine.

It is a competition that has long been the ugly sister of the Premier League. The darling of English football has been lavished with TV rights and transfers, foreign stars and continental tacticians. The FA Cup, meanwhile, has been shafted.

Consisting of reserves and hopeful youngsters, the top teams have never paid much attention to the longest-running cup competition in the world. Its pedigree has been lost, somewhere in the vaults of footballing history, and its value dirtied. But ask the two goalscoring Shaun's and they will tell you otherwise. Their last-gasp goals were signs that the FA Cup is still alive and kicking, just maybe not with the formalities and the politics of the big boys.

No, the FA Cup is for the miraculous minnows, the downtrodden but the hopeful, the ambitious and the aspiring. It is for those who say 'I'm not going to live by their rules anymore.' This was no Groundhog Day, this was Underdog Day.
Andrew Dowdeswell

A sport obsessed 20 something who just really wants Arsenal to finally win the league. Please Wenger, what the hell happened to you?!