For the lesser known clubs still in this year’s FA Cup, this weekend could prove future changing.

The Second round takes place over the next few days, with the third round draw on Monday night. A win followed by a tie against one of the top Premier League sides could give a smaller club the financial injection otherwise not possible.

Hereford, Slough and Leatherhead are the lowest ranked sides still in the competition. The three teams represent the seventh tier of English Football, which is the third level in non-league.

Former Football League club Hereford United is on the march. Having only reformed in 2014, the side are getting unbelievable crowds for the level played at. In the FA Cup first round, they overcame Telford United of the National North, 1-0. Hereford next face a tough test away at League One Fleetwood Town. As is often the case, however, in-form lower league sides can often spring surprises.

Leatherhead reached the FA Cup fourth round in 1974-75. This season's achievement may be just as remarkable, though. From the Isthmian League, they overcame big spending fellow non-league side Billericay Town after a first-round replay. Leatherhead's reward is a trip to Wycombe Wanderers. The League Two team have started the season well, lying fifth in the table. They have also already beaten one non-league side in the cup, Solihull Moors.

The Non-League Paper
NonLeaguePaper
Follow
Anyone else counting down the days to the weekend's #FACup action?! 🤔

Slough are the only tier-seven team at home in the second round. Like Leatherhead, they faced a fellow non-league side previously. Despite being a league below Gainsborough Trinity, they won a quite remarkable game 6-0 on the road. Next FA Cup opponents Rochdale are struggling in League One this season. Slough will fancy their chances.

The only side from the sixth tier still in the competition is Oxford City. The National South team produced a huge shock in the last round, winning 1-0 at League One Colchester United. To improve matters, neighbours United crashed out at the same stage. City face another uphill battle to make the third round though. Notts County stand in their way. Can Oxford City repeat past heroics when they travel to Meadow Lane?

Six further non-league teams, all from the National Premier, remain in the competition. All have been kept separate. Perhaps the biggest of those sees AFC Fylde host former cup winners Wigan Athletic, live on the BBC on Friday night. 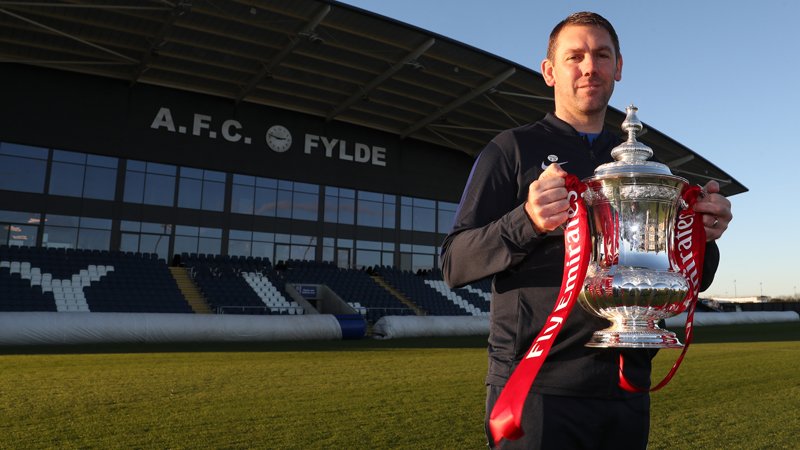 The Emirates FA Cup
EmiratesFACup
Follow
They might be up against League One @LaticsOfficial tonight, but @AFCFYLDE have got an @EmiratesFACup ace up their sleeve...

Fylde is a club on the rise with a new modern stadium, rising attendances and a very bright future. Having won the National North last season, the side are now competing at the top level of non-league football for the first time. They keep breaking records, making history with the victory over Kidderminster Harriers securing a place in the second round of the FA Cup.

The Latics, meanwhile, are among the prize teams in this stage of the draw. They had a fantastic period before falling down the leagues. Wigan's FA Cup win in 2013 is regarded as one of the greatest underdog triumphs in recent times.

Gateshead has had a hit and miss season so far, changing managers along the way. They face a tough test when Luton travel north. The Hatters lead League Two. They also knocked out Portsmouth in the FA Cup first round.

Woking produced an excellent display in the previous round to win 3-0 away at League One Bury. They have been rewarded with a home tie against Peterborough United. Woking currently sit just outside the National Premier playoffs, while Peterborough are lurking behind the play-off places in League One.

Guiseley have a tough trip to Mansfield. Like Luton, the Stags are one of the favourites for promotion from League Two this season. Whereas Guiseley only just survived relegation from the National Premier on last season's final day and are struggling again this time around. They have already picked up a League Two scalp though, overcoming Accrington Stanley after a replay in round one.

Maidstone were another to cause a first-round upset winning 4-2 at Cheltenham Town. They face a tough away trip to MK Dons, however.

Boreham Wood shocked Blackpool with a winner in the final minutes to win 2-1. They go to the Ricoh Arena next to take on former top-flight side Coventry City.

The best of the rest

This weekend's FA Cup action is huge, particularly for Slough, Leatherhead, Hereford and Oxford City. Just one more victory and they could potentially face a trip to English football's elite.

One thing is for sure, the FA Cup hasn’t lost its magic.