Favourites stumble this week, Leipzig march on - The Bundesliga Gameweek 7

Dortmund managed to ruin the first of my bets this week before it even began, though Hertha played their part with an excellent tactical display to pick up a point on Friday night. After frustrating Dortmund throughout the first half with a compact pressing performance, Hertha had the cheek to take the lead after Valentin Stocker latched on to an Ibisevic assist in the 51st minute.

Better chances to equalize don't come along more often than penalties but Aubameyang produced a weak effort which Jarstein was able to save in the 77th, however just four minutes later he was able to rescue a point for the home side with a precise finish. There was still time for a red card for each side, Emre Mor (Dortmund) reacted to a challenge and was shown red, while goalscorer Stocker for Hertha was also shown red for stopping a counter attack with a nasty looking challenge from behind.

And so to the 2nd ruined bet of the week, Mönchengladbach also disappointed me although I did speculate in the previews that Markus Gisdol might have an effect on the previously disappointing Hamburger and they certainly showed an aptitude for a fight with a battling display.

Gisdol had his head in his hands as early as the 25th minute, Cleber was shown a red card for pulling back Stindl in the area and leaving the referee no choice but to award a penalty as well - heads out of hands, Adler saved from Hahn.

Unsurprisingly BMG were dominating but unable to find a way through the battling back line of Hamburg. However it all appeared to be in vain on the hour mark as Mönchengladbach were awarded another penalty, Santos adjudged to have fouled Traore. Stindl stepped up this time but opted for power over placement and smashed the bar which is possibly still shaking. There was still time for Borussia to miss 2 golden chances from Hahn/Elvidi and hit the post via Oscar Wendt. As the saying goes, it's better to be lucky than good and Hamburg will take that! 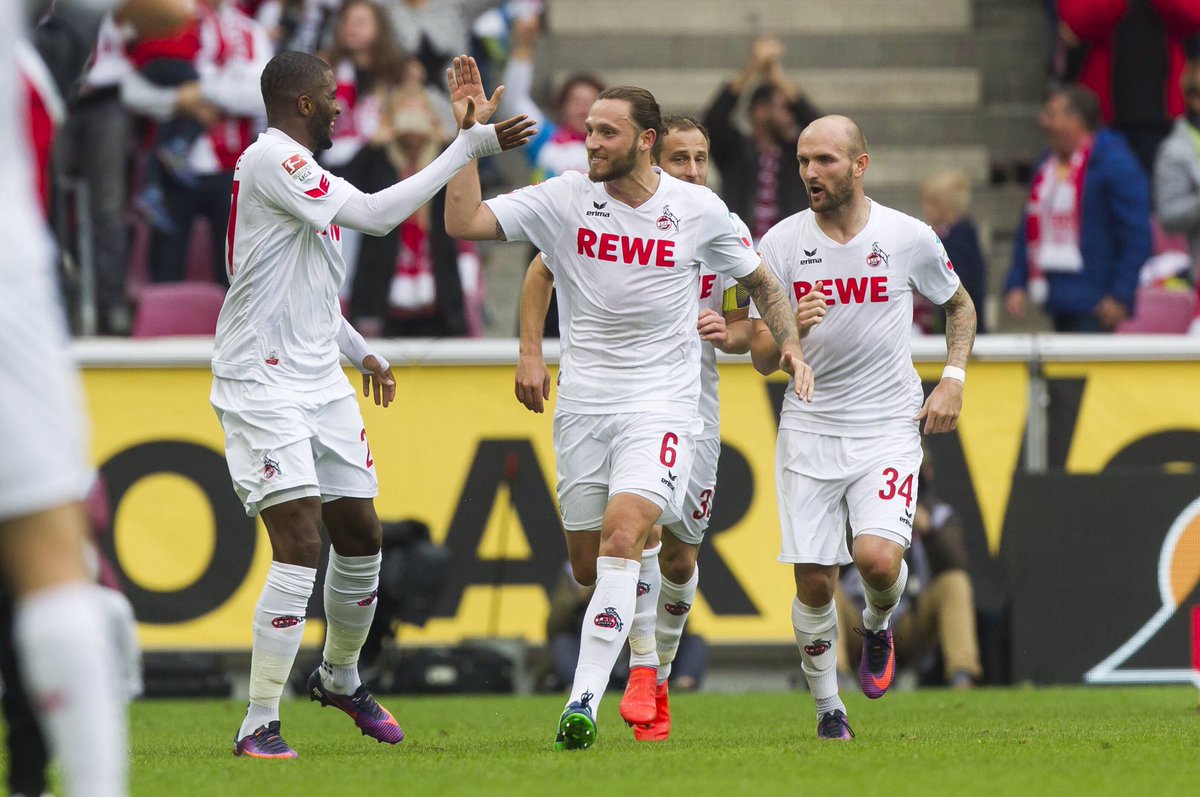 1. FC Cologne
fckoeln_en
Follow
The new #effzeh orchestra! 🎻🎷🎼 https://t.co/BuctQUlueY
Follow
09:36 AM - 16th Oct 16
12
65
Anthony Modeste. *Fire Emoji*. Köln's in form striker grabbed his 6th and 7th of the season to leave them nicely placed in 2nd with a trip to fellow high fliers Hertha to come next week. It could have been 4 goals for Modeste and that Ingolstadt still had a chance was more down to wasteful finishing than anything else.

A comfortable 2:0 half time lead was secured with what is becoming almost a trade mark finish from Modeste, airborne outstretched right foot, goal! A penalty was added and Köln were cruising. Just on the hour mark he really should have had his hat trick but blazed over unmarked from inside the box and that was Ingolstadt's cue to start a fightback, they should have had a penalty on 70 minutes, shocking decision from the referee but were eventually awarded one which Lukas Hinterseer duly dispatched in the 89th. Too little too late, Köln march on!

2 sensational goals, 1 from Bentaleb for Schalke and the other to equalize from Baier for Augsburg but this was all massively overshadowed by a horrible injury for Breel Embolo.

In the 23rd minute a foul by Stafylidis led to the young Swiss star being carried off on a stretcher after several minutes of treatment on the field, the diagnosis a broken ankle/torn tendons which will keep him out until March at the earliest. A terrible blow for Schalke after he just found his form and place in the team after a difficult start.

The draw was a fair result from the game, both teams can take some satisfaction with the result away.

In my preview I mentioned the Hoffenheim goal threat from Wagner and Kramaric and both scored to secure all three points for the Kraichgau team and a quite sensational start to his first full season for Julian Nagelsmann.

Wagner took advantage of a disastrous back pass from Söyüncü just after half an hour to give Hoffenheim a deserved lead. After the break they continued the pressure, but it was Niederlechner for Freiburg in the 78th who scored next and finally I was looking good for a correct prediction this week.

No such luck. Söyüncü made his 2nd awful mistake, taking out Rudy in the box and Kramaric made no mistake with the penalty to give TSG the deserved win. Freiburg need to break this away day curse if they want to retain their Bundesliga spot. 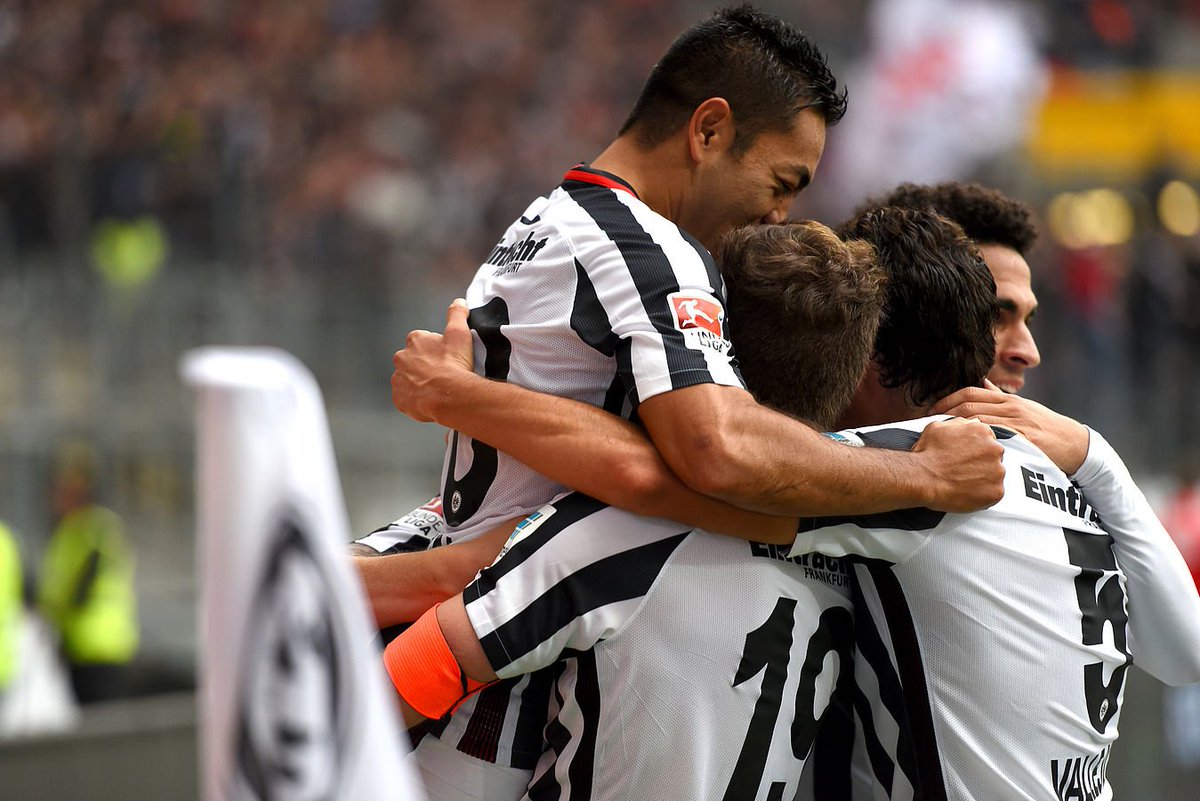 Eintracht Frankfurt
eintracht_eng
Follow
HAPPY SUNDAY
Great weekend for all Eagles with the 2-2 against record title holders @FCBayernEN who had only conceded 2 all season.
#SGEFCB https://t.co/ZG4UQp5Mno
Follow
10:18 AM - 16th Oct 16
32
153
Is it too early to say something is wrong with Bayern? I cannot remember the last time they contrived to throw away leads twice in a row in the Bundesliga, and twice in one game here in Frankfurt. The response in the Champions League will be interesting this week that's for sure.

Arjen Robben gave the visitors the lead in the 10th minute on his first start of the season but Frankfurt fought back with an equalizer before the break via Huszti. Goal machine Joshua Kimmich grabbed the lead back again for the Bavarian giants just after the hour mark but once again Frankfurt came back and secured a well-deserved point with a goal from their own new goal machine Marco Fabian.

Bayern still lead the way at the top of the table but they are not having things all their own way anymore, it seems the fear factor is starting to crumble.

Lovely stories all around on the Werder side of this result but Leverkusen missed a great chance to narrow the gap to the top 4 places with a lackluster display of their own this week.

Alexander Nouri was able to celebrate a win on his official “debut” as head coach but the biggest smiles were reserved for Ousman Manneh, the Werder match winner who scored his first Bundesliga goal 2 years after arriving in Germany as a refugee.

Werder took the lead early, Junuzovic followed up a save from leno to slot in but Calhanoglu cancelled it out heading home from a Kampl cross. After Manneh's match winning intervention, Bremen were surprisingly able to hold Bayer at arm's length and see out the result.

Finally a correct prediction. Another penalty laden game was decided by Mainz, an early lead via De Blasis and a penalty early in the 2nd half dispatched by Yunus Malli. Darmstadt had missed a penalty of their own on the stroke of half time, Antonio Colak the culprit and he was also to miss a gilt edged chance late in the 2nd half. Jerome Gondorf did finally get Darmstadt on the scoresheet with yet another penalty but it was the last action of the match and Mainz just about deserved the win.

RB Leipzig English
RBLeipzig_EN
Follow
#DieRotenBullen are the first ever promoted side to remain unbeaten in their first seven #Bundesliga matches! 😀👏💪 #WOBRBL https://t.co/NhXDfQiwwD
Follow
19:02 PM - 16th Oct 16
31
34
Pressure level up to 10 on Dieter Hecking. I will leave my critique to… this simply is not good enough from Wolfsburg.

That Leipzig could afford to miss a penalty (the 5th missed penalty of the weekend and a new “record”) and still stroll to a 1:0 win with Forsberg redeeming his missed kick in the first half says volumes about the funk sitting over the northern giants. Their only real chances came in the first 10 minutes, Draxler and Vierinha not able to convert and Mario Gomez once again utterly anonymous.

Leipzig sit in 3rd, unbeaten in their first 7 and they play Werder (H), Darmstadt (A) and Mainz (H) before Leverkusen come to town in Gameweek 11. I would not bet against them making it 10 unbeaten before then.