The FIFA Club World Cup is upon us. As usual, seven sides from six different continents will contend for the most prestigious accolade in club football. With the drums set to roll on Wednesday in the city of Al-Ain, the United Arab Emirates, we take a closer look at the participating teams.

Al Jazira found its way into the annual gong as the champions of the host nation, UAE. Although the Pride of Abu Dhabi has no previous experience in the FIFA Club World Cup, they will certainly be motivated by the home support. The reigning Arabian Golf League holders will need more than just its fervid fans, however, as only once has a team clinched the tournament on home soil.

Al Jazira begin their sojourn in the curtain-raiser against Auckland City on Wednesday.

Unlike Al Jazira, Auckland City is no strangers to the Club World Cup. Formed in 2004, the Navy Blues have made it to the global showpiece an unbelievable eight times - missing out on just six occasions.

The Oceania champions will be aiming to make their experience count this time by surpassing their best-ever third place finish at the 11th edition in Morocco.

Pachuca return to the competition after a seven-year absence. The five-time CONCACAF champions participated in three successive editions between 2007 and 2010, yet didn't come anywhere close to reaching the last four. In fact, no team from its region has achieved that feat. It adds extra motivation for the Mexican side, which could go all out for the title this time.

Los Tuzos must first overcome the CAF representative, Wydad Club, on Saturday for a place in the semi-final. 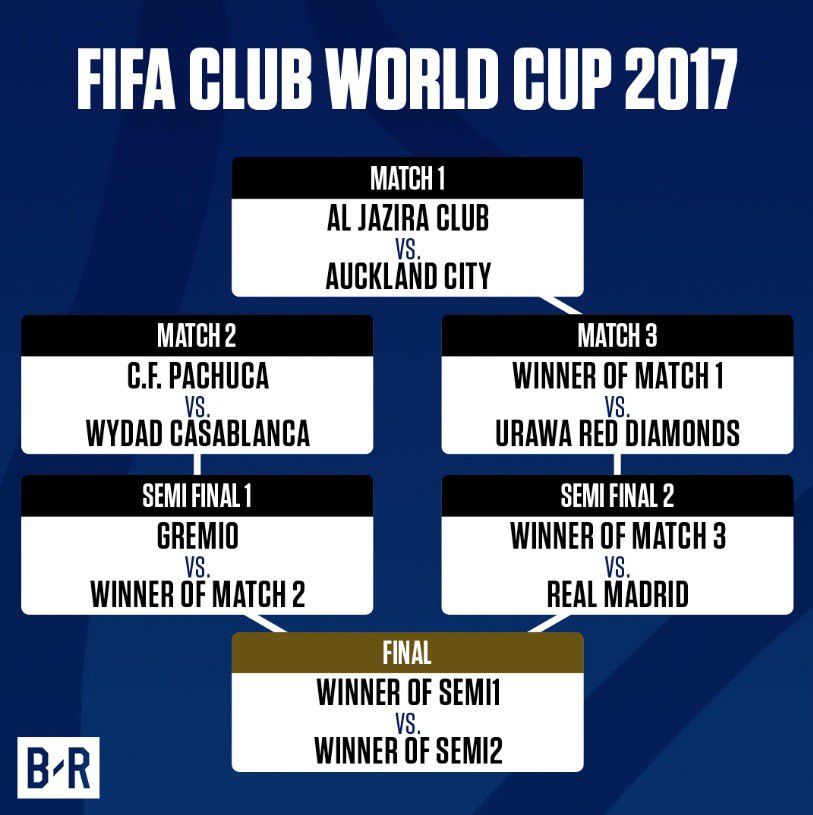 Another debutant, Wydad Casablanca bears the burden of the entire mother continent. The Moroccans will be aspiring to follow in the footsteps of fellow African sides TP Mazembe and Raja Casablanca. Both teams reached the final in their maiden appearances.

A potential clash with Gremio is on the cards should Wydad scoop a surprise victory over Pachuca.

Newly crowned Copa Libertadores champions, Gremio are the third debutant at the 14th edition of the Club World Cup. In previous competitions, the title has landed in South America on the four occasions when it didn't go to Europe. Remarkably, all four winners were Brazilian. O Tricolor will, therefore, have high expectations.

Gremio enter the fray on 12 December against the winners of the Pachuca-Wydad tie.

Asian champions Urawa Diamonds will make its second appearance at the Club World Cup. The last was in 2007 when they beat Etoile du Sahel on penalties in the match for third place.

Should the Japanese prevail in the opening game against either Al Jazira or Auckland, they will take on reigning champions Real Madrid in the semi-finals. With compatriots Kashima Antlers having finished runners-up last year, Urawa will not lack motivation.

This team needs no introduction. Record UEFA Champions League winners, Real Madrid are aiming to become the first team to win the Club World Cup twice in a row. Should Los Blancos achieve that feat on 16 December in Abu Dhabi, they will join Barcelona as the most successful side in history with three titles.

Leave a comment
Latest Other Tournaments Articles
Can James Rodriguez focus on the Copa America with his club future in limbo?
By Zaid Pathan

Football is the most popular and watched sport in the world. A high percentage of audiences watch the action here in England and the Premier League, even in the US, where football…